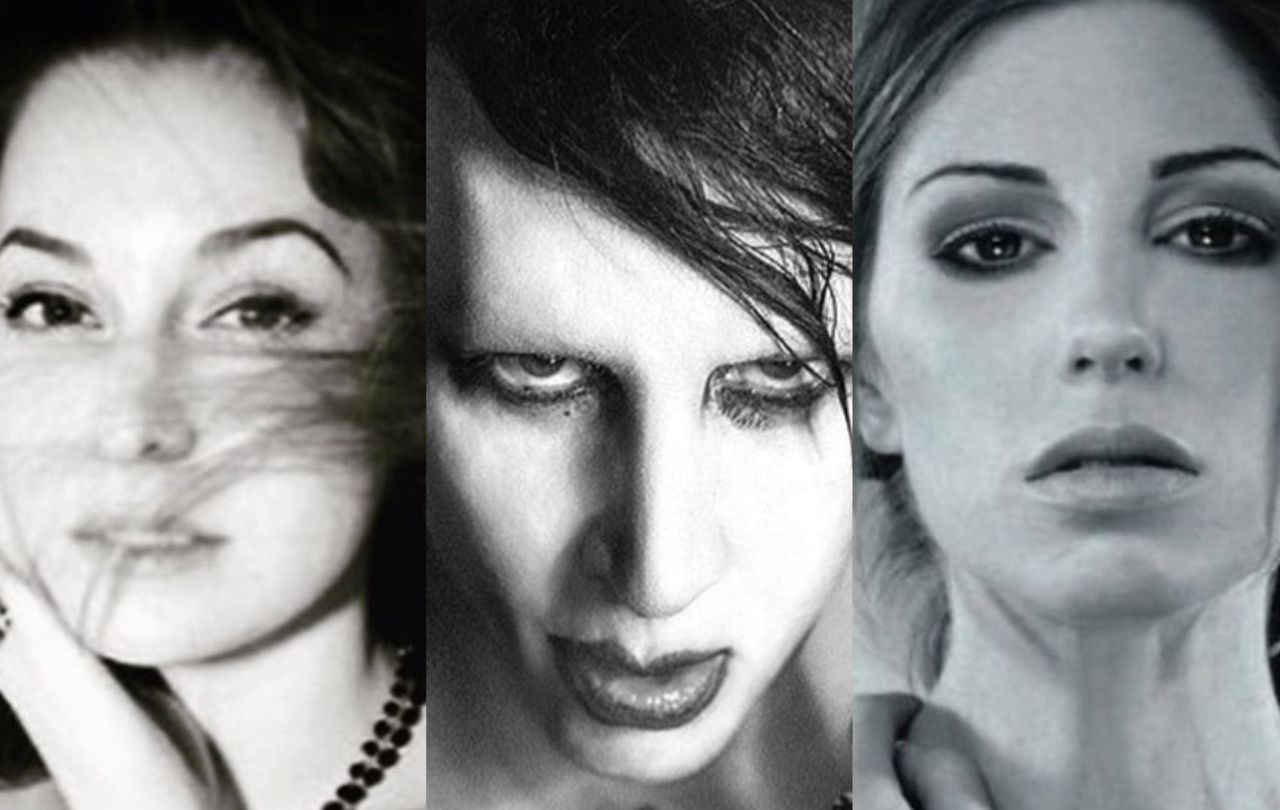 Will Marilyn Manson face human trafficking charges? If you read Esme Bianco’s and Ashley Lindsay Morgan‘s victim statements where they allege that Marilyn Manson abused them, you’ll notice a commonality. Both women were in other countries when they say that Marilyn Manson groomed them and invited them to come to the United States for work. Esme Bianco is an actress who in 2009, left her home in the U.K. to appear in a video and movie for Manson. According to her statement, Marilyn Manson told her he would film the video on a Flip camera. To this date, she has not seen the footage and describes a terrorizing event of being locked in a room when Manson allegedly tied her up half-naked then violently whipped her, all while filming the incident on his Flip camera.
Esme shared a photo of her back bearing whip marks on her Instagram account where she spoke about the abuse. At the time of her initial post, she did not name Marilyn Manson as her abuser. She shared the post following her testimony to the California Senate alongside Evan Rachel Wood where they called for an extension on the domestic violence statute of limitations under the Phoenix Act. A social media campaign called #IAmNotOk ensued, but the public only surmised who their alleged abuser was. Now, Evan Rachel Wood and Esme Bianco aren’t holding back. They have publicly named Marilyn Manson, whose proper name is Brian Hugh Warner, as the man who abused them. Esme also alleges he human trafficked her. Esme spoke to Good Morning America and stated the photograph below is from her trip to the United States where she stayed with Marilyn Manson as he allegedly filmed himself whipping her.
RELATED: Marilyn Manson Gets Welfare Check From The LAPD Amid His Abuse Scandal – Details!
Source: Esme Bianco/Instagram
As Marilyn Manson allegedly did not hold true to any form of promise or contract, Esme presents the case that Manson lured her to America as involuntary servitude after which he sexually abused her. She spoke to The Cut about being lured to the U.S. under false pretenses and said that Manson wanted her to appear in a movie he was working on Phantasmagoria and star in his video for the song “I Want to Kill You Like They Do in the Movies.” The Cut shared the following.

Their dynamic changed in 2009, after Manson sent Bianco a plane ticket from her home in London to L.A. so she could star in the music video for his song “I Want to Kill You Like They Do in the Movies.” He explained that it would be shot on a flip camera for a home-video feel and would involve Manson “kidnapping” Bianco in his home. “I need to have a victim/lover,” he wrote in an email. Bianco believed that the job would be strictly professional. “You are gonna have to pretend to like being manhandled by me. Sorry,” Manson emailed her a few days before the shoot. Once she arrived, she says, the line between art and reality immediately blurred. Bianco, who was 26 at the time, says she spent the next three days in lingerie, barely sleeping or eating, with Manson serving up cocaine rather than food. She remembers him losing his temper and throwing the camera at a smoke alarm. Soon, she says, he became violent, tying her with cables to a prayer kneeler, lashing her with a whip, and using an electric sex toy called a Violet Wand on her wounds — the same kind of “torture device” Wood has said was used on her. Bianco was terrified but tried to calm down by telling herself, It’s just Manson being theatrical. We are going to make great art.
RELATED: Marilyn Manson Announces Upcoming Album, Appearance On ‘Ride With Norman Reedus’ Season Finale

You may read the full interview with Esme Bianco for The Cut below.

To this day, Marilyn Manson does not have an official video for his song “I Want To Kill You Like They Do In The Movies.” There is only an official lyric video for the song. Now, the question is being raised why Manson chose not to release the footage or create an official video.
Was Manson’s goal to make a home video of himself torturing Esme to the song’s soundtrack for his personal gratification?
Considering Esme’s story, the lyrics to the song have a chilling impact. The song begins with these words.
(Trigger Warning)

I wanna fu$% you like a foreign filmAnd there’s no subtitles to get you through thisAnd I’m a country you don’t ever, ever, ever, everEver want to visit again

Esme described the filming as being a blur between reality and art, considering Manson allegedly flew her from the U.K. to the U.S. and the song includes the lyrics: ‘I’m a country you don’t ever, ever, ever, ever, ever want to visit again,’ it’s almost a self-fulfilling prophecy. It also shows the surreal atmosphere Esme must have experienced while filming scenes for this ‘video’ that twelve years later, still hasn’t seen the light of day.
The lyrics continue with eerie similarity to the women’s allegations.

Many of the women who accuse Marilyn Manson of abusing, torturing, and terrorizing them, say that he intentionally cut them. Artist Gabriella Accarino says Marilyn Manson cut their hands and made a blood pact before he terrorized her, including raping her on multiple occasions.
Consider these lyrics along with Esme’s allegations that she was human trafficked to film her part in the video for this song and you’ll see why many people are asking questions as to Manson’s real motive for allegedly flying her to the U.S. for what she describes as three nights of being tortured and abused under the guise of art.

(Trigger Warning)
You may see the ‘official video’ for “I Want To Kill You Like They Do In The Movies” by Marilyn Manson below.

You may see Esme Bianco’s full interview with Good Morning America where she speaks about her allegations that Marilyn Manson human trafficked her below.

Multiple women have accused Marilyn Manson of abusing them and many were artists, photographers, models, and actresses, who say Manson sucked them into his orbit through the guise of work.
Ashley Walters was a photographer who Manson later hired as his personal assistant. Gabriella Accarino is an artist who met Manson backstage at a concert. Sarah McNeilly is a model who says Manson love bombed her then as part of his control, kept her away from other artists.
Evan Rachel Wood is a talented singer and actress, yet in her time with Marilyn Manson, she never recorded a song with him. Evan Rachel Wood had a lead, singing role in the movie Across the Universe and is Disney’s Queen Iduna in Frozen 2.
Esme Bianco says she was physically and sexually assaulted by Manson under the guise of making a music video that he filmed personally in his home without a crew and that he never released
Was Manson truly offering women a position in his inner circle to advance their careers or as the women say, was it about manipulation, control, and intimidation?
Or was it something more? Was Marilyn Manson continually reaching out to unsuspecting women, luring them in under the guise of professional opportunities, all so he could have the ‘next woman in line’ in order to abuse for his own sexual needs and gratification?
Is Marilyn Manson a serial predator looking for women he can cast in the sadistic movie script that is his life?
Marilyn Manson released one statement on his Instagram account where he addressed the many allegations against him. He described both his life and art as being the subject of controversy. Now, many say that with Marilyn Manson, there is no differentiating between his art and his personal life.
Marilyn Manson stated the following.

Obviously, my art and my life have long been magnets for controversy, but these recent claims about me are horrible distortions of reality. My intimate relationships have always been entirely consensual with like-minded partners. Regardless of how — and why — others are now choosing to misinterpret the past, that is the truth.

Esme Bianco isn’t the only woman who alleges Manson reached out to her then flew her overseas to ‘work’ for him.
In Ashley Lindsay Morgan’s statement, the model says she was working in Thailand when a mutual friend she shared with Manson approached her and said he wanted to work with her. Like Esme, Ashley says he flew her to Los Angeles. She doesn’t elaborate on her working experience with Manson but there are no film credits that attribute Ashley Lindsay Morgan appearing in any Manson-directed projects.
Ashley also accused Manson of trafficking.
You may see Ashley Lindsay Morgan’s full statement below.

Ashley shared a screenshot of an alleged email she received from Manson where he spoke of creating a blood pact with her.

Here is Ashley Lindsay Morgan’s statement alleging that Marilyn Manson trafficked some of his victims.
Source: Ashley Lindsay Morgan/Instagram
Whether Marilyn Manson will face human trafficking charges is currently unclear, but Esme Bianco confirmed she spoke to the F.B.I. Calls for a massive investigation into Marilyn Manson involve multiple allegations across many states, making it more likely the case would become federal, especially since international travel.
If Marilyn Manson is still using the same alleged tactics and engaging in the behavior described by Esme Bianco, Ashley Lindsay Morgan, and the other women and the cases fall within the statute of limitations for individual states, there could be charges on a state-by-state basis.
However; there is no statute of limitations on federal cases of human trafficking, especially when those cases involve minors. Should the F.B.I. decide to pursue a case against Marilyn Manson, Esme Bianco and Ashley Lindsay Morgan (and any other woman with similar allegations) could testify against the shock rocker.
Besides human trafficking allegations, Gabriella Accarino’s statement includes alleged rapes that would fall within the 10-year statute of limitations.
The F.B.I. is currently investigating the women’s allegations.
Stay tuned for more on this developing story.
Advertisement

Is American Idol Exploiting Claudia Conway By Having Her On The Show?
Phaedra Parks Looks Drop-Dead Gorgeous In Red Lingerie
Comment