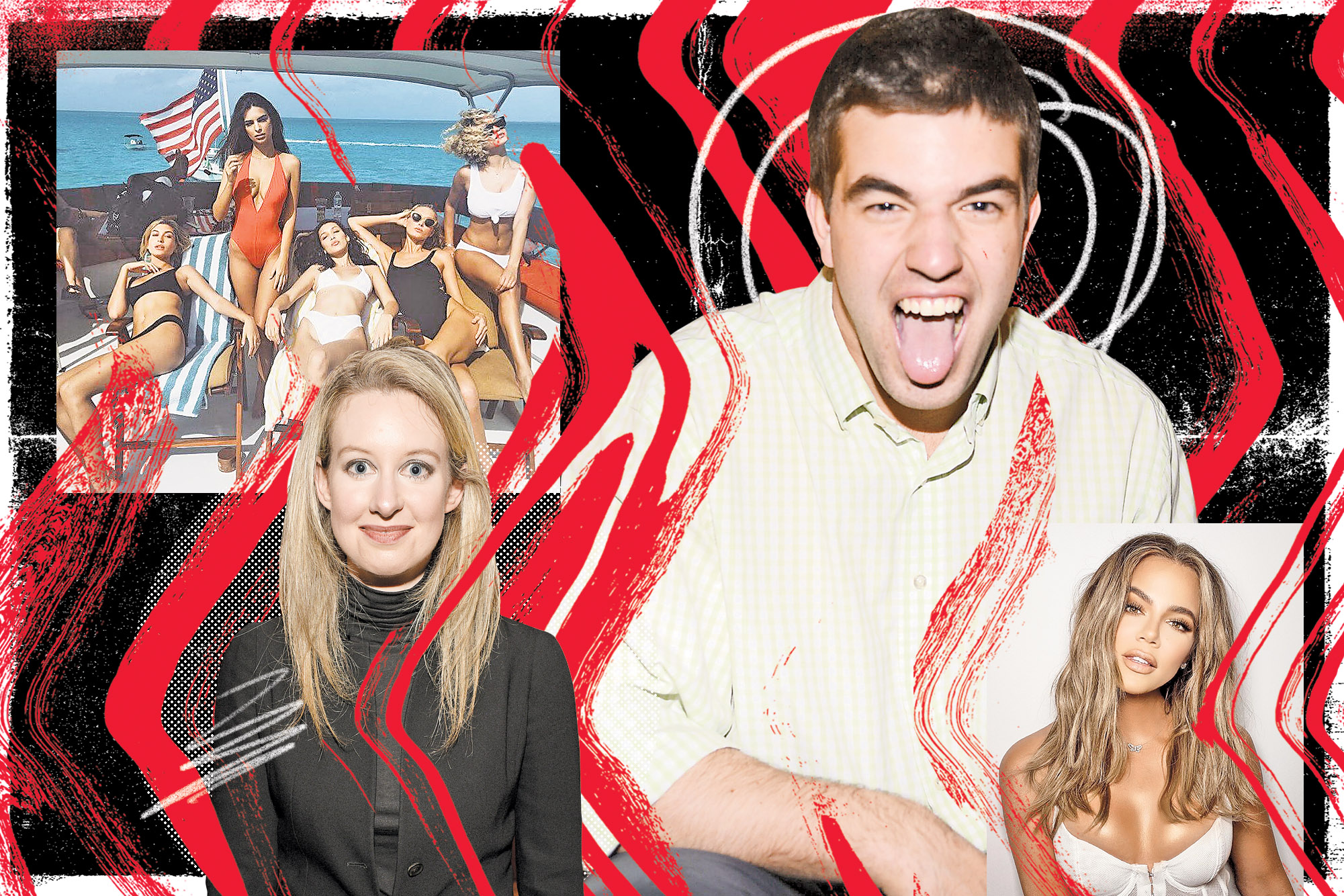 Few of us will ever forget the failed Fyre Festival, a 2017 disaster helmed by startup bro Billy McFarland. It had all the elements of a perfectly promoted event: Supermodels Kendall Jenner, Bella Hadid and more posed in bikinis for a sexy video promoting the festival, stars and influencers posted about it to their millions of Instagram followers, and respected media outlets legitimized it.

Attendees then spent thousands to fly to the Bahamas for a weekend of decadence that turned out to include sleeping not in glamorous villas, but decrepit tents, and dining on cold cheese sandwiches rather than gourmet fare. Hundreds ended up stranded, struggling to get back on planes home. And all of this unraveled live on social media.

For Gabrielle Bluestone, the author of “Hype: How Scammers, Grifters, and Con Artists Are Taking Over the Internet—and Why We’re Following,” (Hanover Square Press), the festival is a stark example of how we’re living in the golden age of grift.

“Scammers play on your emotions,” Bluestone told The Post. “The most effective ones elicit a response and it’s usually about FOMO [fear of missing out] or loneliness.”

She writes, “Whether it’s the value of a company, the authenticity of a person we’ve never met, or the efficacy of face masks during an airborne pandemic, at some point along the road, we as a society tacitly agreed to start trusting our emotions and feelings over verifiable facts — all without ever realizing just how much our social media use is manipulating those judgments in the first place.”

Here are some of the reasons we keep getting conned — and what we can do to stop falling for the fakery.

According to Bluestone, the con of the Fyre Festival “didn’t just entice buyers with its images of beautiful models in bikinis and pristine sand beaches — it also triggered an equal and opposite powerful emotion: fear and, in particular, the fear of missing out,” or FOMO.

Unfortunately, the increased use of social media has spiked that emotion.

“Studies have also shown direct links between the use of social media sites like Instagram and Facebook and ‘increased social comparisons and negative affective states such as envy and jealousy,’ ” writes Bluestone.

“As many as three-quarters of Internet users back in 2011 reported experiencing unease when they felt they were missing out on what their peers were doing.”

It’s important to remember that much of what’s being pushed out on social media — especially by people you don’t know — is a construct. “I’m convinced that if even just one or two of the acts made it onstage for the Fyre Festival, everyone would’ve pretended like they were having the time of their lives, no matter what disaster was actually happening,” Bluestone said.

Khloe Kardashian, posing in Good American pumps, has been called out by fans for heavily altering her photos. goodamerican/Instagram

We believe manipulated images are real

When you’re scrolling through Instagram, it’s all too easy to convince yourself that before/after photos of Botoxed or liposuctioned patients are real — or that a celebrity’s face is blessed with contours you can only dream of. Khloé Kardashian, for example, has come under fire from followers for posting shots of herself on Instagram that render her unrecognizable.

But these images are rarely the real deal.

“I spoke with a top plastic surgeon in Los Angeles who warned me that many doctors Photoshop photos on Instagram,” Bluestone said. “It’s hard to track and prove except in the most egregious cases.”

The desire to look like a filtered photo has creeped its way into real life. Dana Omari, a registered dietitian with a master’s in biochemistry who works at a Texas medspa told Bluestone, “People will come in with a picture of themselves with a Snapchat filter or an Instagram filter. And a lot of those things are actually not possible to do with procedures. I mean there’s no way that we can just make your face into a heart shape if it’s not.”

If you see some “incredible” results online that make you want to try a treatment, don’t accept the photo at face value. Ask the practitioner or doc behind the account about the patient — when did they come in? How long after the treatment was the “after” taken? If they can’t answer or it seems fishy, it’s probably faked.

Bluestone also suggests giving yourself a reality check by looking at Instagram accounts that call out cosmetic enhancements and Photoshopping — CelebFace and IGfamousbyDana (Run by Omari) are two good ones — and show what the photo subjects really look like without retouching.

Thanks to social media, we think we’re friends with influencers, so when they recommend products, we jump.

Such was the case with the Fyre Festival. “It was so successful because they filtered their scam through these trusted influencers and laundered the message through them,” she said. “All these people had good will with their followers so when Bella Hadid talked it up, her followers bought tickets.”

To prevent this from happening, don’t be impulsive about a product a celebrity is shilling. Actually ask yourself the reason you want to buy something. “If it’s because so-and-so said so, maybe that’s not the best reason to purchase something,” she said.

But that’s harder than it sounds. Bluestone cites research from 1950s psychologist Solomon Asch, which “confirmed time and time again that all it takes to convince us to think something is a sense that everyone else thinks it,” she writes. “In one experiment, for example, he showed subjects a series of three lines and asked them to identify the one that matched the length of a fourth line. His subjects had no problem picking out the correct line — until they were put in a room of actors who deliberately chose one of the incorrect answers. About 75 percent of the subjects chose the obviously incorrect line at least once, all thanks to peer pressure.”

We trust online reviews from strangers

In a well-documented two-year scam, Sunday Riley, an Insta-popular skin care brand, was accused of allegedly teaching employees how to write fake reviews about their products on Sephora.

After an e-mail detailing the sneaky practices — reportedly written by a company exec — went viral on Reddit, the Texas-based company ultimately settled the charges with the Federal Trade Commission. But to date, they never admitted any wrongdoing.

What should you think when every review you read seems glowing? Check to see whether the language looks similar in every write-up. Many sites now also note if the reviewer is a confirmed purchaser of the product. “See if that person ordered an item and paid for it,” Bluestone said. “I always suggest people filter a product by the worst reviews before deciding if an item is worth buying.”

We value potential and youth over experience

It’s easy for us to trust young “hot-shot” salespeople: They exude confidence which we often confuse with knowledge. The promise of someone “disrupting” an “old” system is enticing.

When she was just 19, Elizabeth Holmes left Stanford to launch Theranos, a company based on buzzy blood-testing technology, the efficacy of which she couldn’t back up with scientific evidence. Although she was declared a billionaire by Forbes in 2014, she was later charged with defrauding investors — including Henry Kissinger, who sat on the board — out of more than $700 million.

But why did so many people trust a 19-year-old college dropout pushing a major medical venture?

“There’s just something about youth and energy and excitement. It’s a story that you want to succeed,” Robert Prentice, a lawyer, University of Texas professor and an expert in securities fraud told Bluestone. “They’re appealing, and you want to believe it so much that you can talk yourself into it.”

There’s just something about youth and energy and excitement. It’s a story that you want to succeed.Lawyer and professor Robert Prentice on why we trust the likes of Elizabeth Holmes

One of Holmes’ professors, Phyllis Gardner of Stanford Medical School, immediately mistrusted her student and her methods.

“Look, in high tech, you can fake it [till] you make it,” she told the Mercury News in 2019. “In medicine, you do not fake it. Ever. That is verboten, and that is why we have regulatory agencies.”

“Everything was an appearance: the black turtlenecks and the deep voice and the glammed up look and everything,” Gardner said. “It was a facade, and you never could see the true Elizabeth.”

When you’re considering investing in anything from daily vitamins to a major corporation, check to see the qualifications of anyone shilling something — especially if it’s medical advice. “Do your own research, see if their background reflects what they’re saying,” said Bluestone, who writes in her book that many influencers and celebs touted the medical benefits of celery juice, for example, inspired by Anthony Williams, who is not a doctor but calls himself a “medical medium.”

We’re guided by emotions over facts

During the pandemic, we’ve been especially vulnerable to scams like fake animal rescues, which have proliferated.

You think you’re donating to a legit rescue when you’re actually being duped by scammers who beg you to donate to the organization before an animal is put to sleep.

“People use stolen photos of animals and create fake Web sites for shelters that don’t exist,” she said. “There are also plenty of puppy mills posing online as rescues or Web sites offering pets for adoption that don’t exist.”

Bluestone notes that there’s a major investigation into the Animal Hope and Wellness Foundation in Sherman Oaks, Calif. — a charity that’s been supported by Joaquin Phoenix, Matt Damon and more stars — which alleges that founder Marc Ching fabricated or exaggerated the already-heartbreaking trauma its animals have been through, the LA Times reported in December.

Before you hit the donate button, make sure it’s a legit charity. “You can find out by researching if they’ve filed their 501(3)(c) nonprofit tax forms,” she said. “Or do a reverse image search on Google. That sad photo of a dog may be a stock image or it may have been posted somewhere else first.”