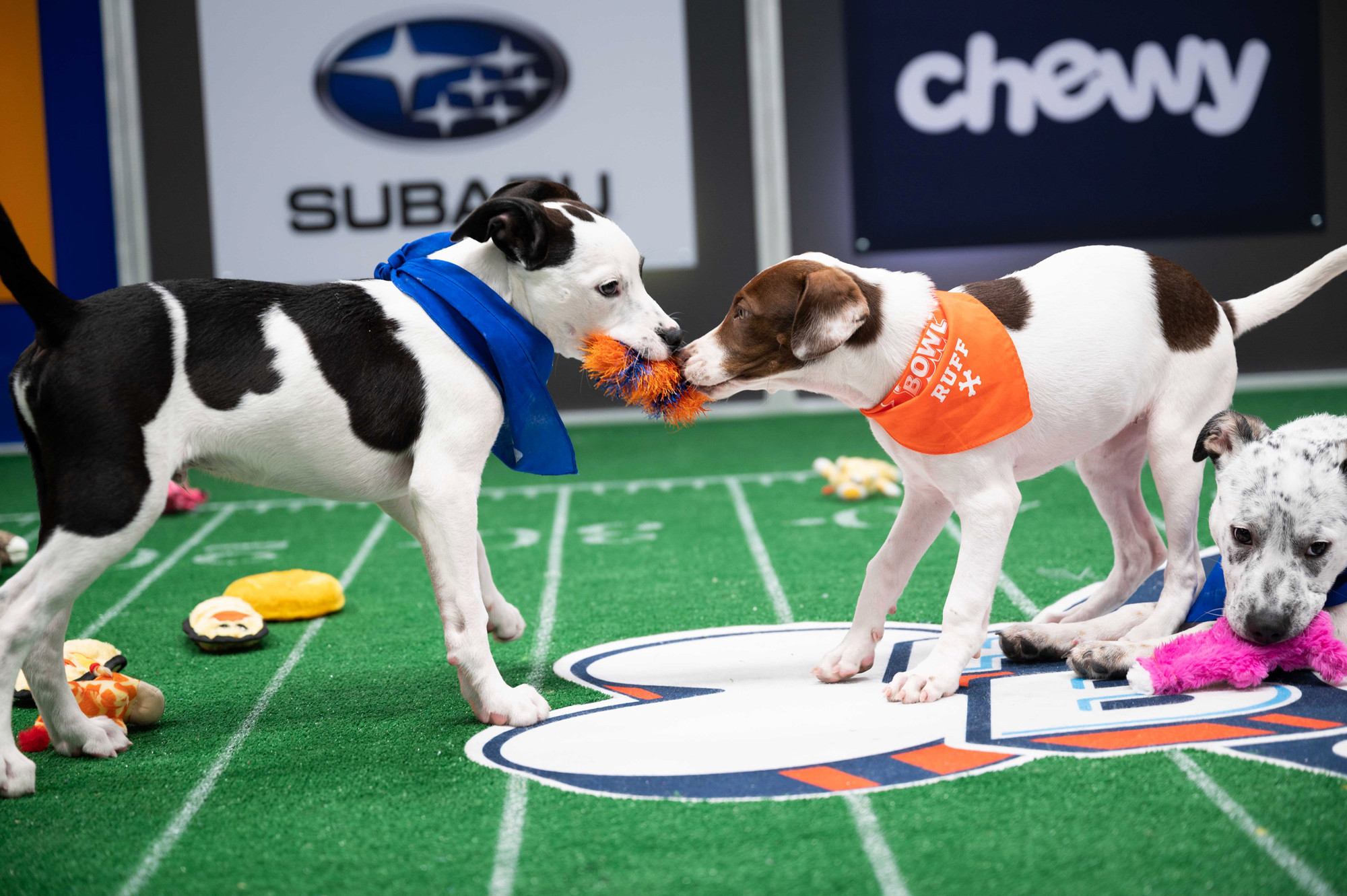 It was a rough game for Team Fluff.

The winners of the 2021 Puppy Bowl have their coveted Lombarky Trophy: Team Ruff, the underdogs after consecutive victories from opponents Team Fluff, won the 17th annual matchup of adoptable pups and dogs.

Here’s a paw-by-paw recap of the riveting rumble.

Team Ruff’s Archer, an American Staffordshire Terrier, got the game off to a wild start with a penalty for “illegal use of the goal posts” — ripping off the goal post of the opposing team.

Ruff’s Muffin, a terrier mix, scored the team’s first touchdown after a fierce tackle from hearing-impaired terrier Marshall — who’s training to be a support pup for nurses on the front line of the COVID pandemic and was an early contender for Most Valuable Pup.

Meanwhile, Chow Chow mix Chunky Monkey was penalized for “excessive slumber” after his snooze on the sidelines. Cute, but no cigar. Still, Twitter went wild with the Most Valuable Mood served up by the Chunk himself.

Later in the first quarter, a brutal tug of war ensued between Muffin and Marshall while nervous Nelly Gus on team Fluff required a bit of a “pup” talk to get his head in the game. Alas, Marshall crossed the goal line for a Team Fluff’s first touchdown. Very Good Boy Milky Way also added to Fluff’s touchdown count in the first quarter. Paulie, a little rascal of a mix, barked right back, winning a touchdown for team Ruff. Teammate Mix Hashbrown tied up the game 21-21 at the end of the first quarter.

In the second quarter, Great Pyrenees mix Duke got duped by team Fluff’s unflappable offense, giving golden retriever Beliveau the opening for a touchdown, bringing his team up 35-21 after another TD from terrier-bulldog mix Sonic.

Ruff’s Fletcher, a hearing-impaired beagle mix, scored another jubilant touchdown, with Ruff’s first field goal scored by Tank, an adorable Rottweiler/boxer, at the end of the first half. Team Fluff remained the top dawgs, no thanks to Fluff’s Erica, a border collie mix who opted to take it easy in a nice quiet corner of the stadium.

The pups got a rest during the halftime show, performed by a very stimulated band of kittens, led by DJ Grand Master Scratch on the turntables.

At the start of the third quarter, Team Fluff’s furball of energy, Fozzie, was knocked with a penalty for “pancaking the puppy.” But the Norwegian Elkhound mix still looked fly — thanks to a special grooming at Harlem’s Doggie Day Spa prior to the big event. Later, Ruff’s Apollo gave Dwight a clear path to the end zone, handing Ruff a three-point lead. The victory didn’t last long, when Fluff’s Beliveau scored again after a rather aggressive tackle into the water bowl at Tank’s expense.

In the final quarter, crowd favorite Jett — a two-legged lab with his very own wheeled cart — made his doggie debut and scored a touchdown for Team Fluff, thanks to an assist from lab/terrier mix Jay.

American Staffordshire Terrier/Dutch Shepherd Paulie joined the two-touchdown club for team Ruff, but the team couldn’t keep up with the good boys. Beliveau — who frankly looked a bit large for a puppy — scored his fourth touchdown for Fluff.

Making the game a real paw-biter, Muffin scored another TD for Ruff, bringing the score up to 66-69 with less than a minute left in the game.

But Team Ruff scrapped his way to a victory for Team Ruff thanks to Big Boss Paulie from New York. After back-to-back wins from Team Fluff in years past, Team Ruff barked its way to legend-hood with a 73-69 final score.

Let’s not forget that the MVP of the game — Marshall, our hearing-impaired Boston terrier — snagged the esteemed title. Extra treats for Marshall!

The big matchup was joined by a lineup of celebrity animal lovers: It was hosted by best pals Martha Stewart and Snoop Dogg, who set the table tail-gate snacks and drinks — D-O-double-G, of course, brought the gin and juice.

But the real winners of the game were the 70 families who brought home champs after the Puppy Bowl — according to Animal Planet, every last one of the dogs in every Puppy Bowl get adopted by the time the show airs.