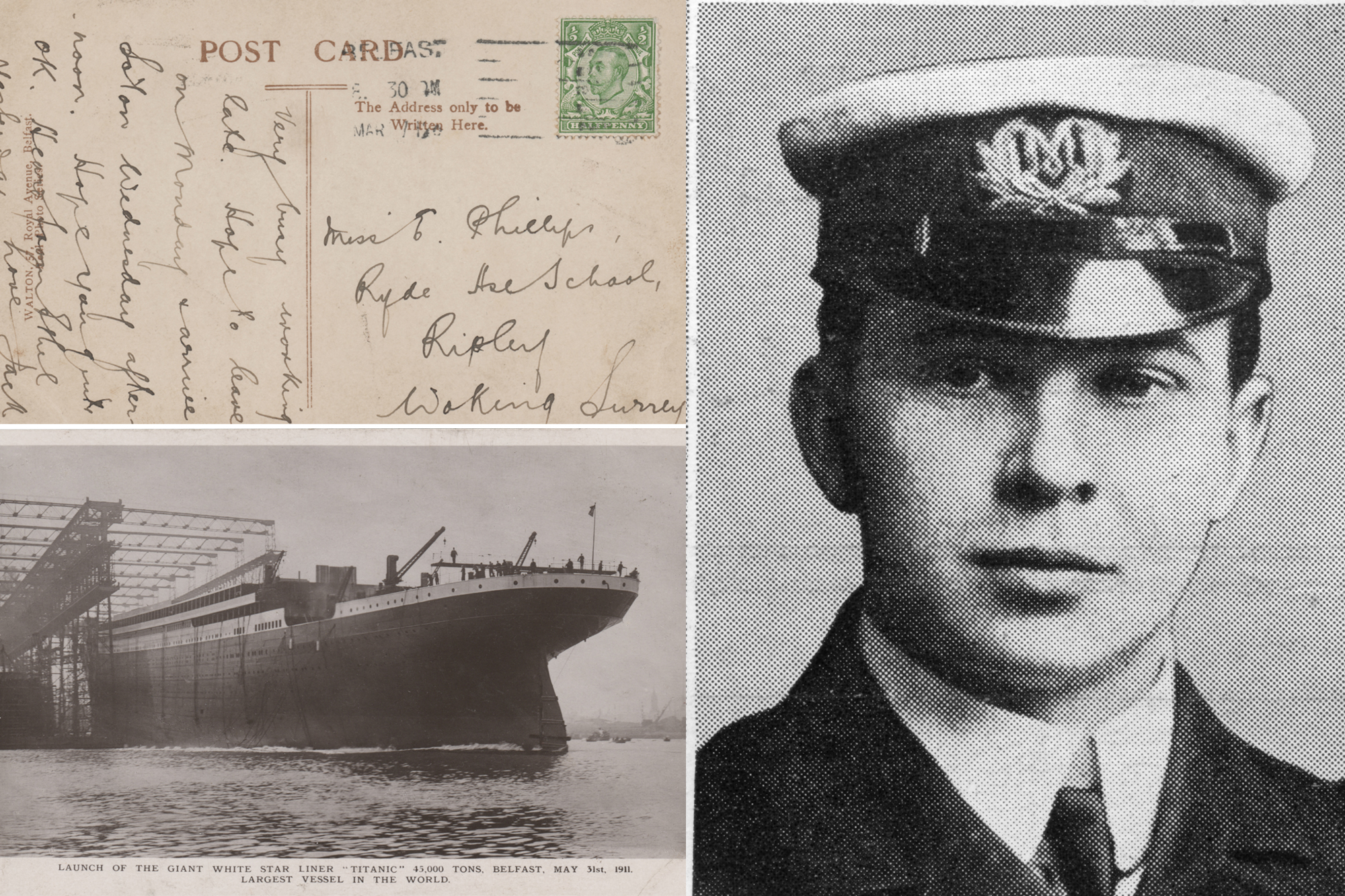 Signed “Love, Jack,” the postcard was sent by a hero of the Titanic disaster – but he wasn’t the fictional (swoon!) Jack Dawson character played by Leonardo DiCaprio in the epic 1997 movie.

Nonetheless, the 1912 correspondence bearing an image of the supposed “unsinkable” ship written by senior wireless operator Jack Phillips is expected to fetch at least $15,000 at auction this month.

The then-24-year-old sent the postcard 109 years ago to his sister, Elsie Phillips, from Belfast, Ireland, on March 7, just five weeks before the fateful sinking — and his death on April 15.

He wrote a sweet message to his sibling on the reverse of the glossy photo postcard showing the White Star Line’s Titanic on the day of its launch at Belfast on May 31, 1911.

“Very busy working late,” wrote the experienced telegraphist, who perished after the ship hit the massive iceberg in the North Atlantic off Nova Scotia.

“Hope to leave on Monday and arrive So’ton [Southampton, England] on Wednesday afternoon. Hope you quite OK. Heard from Ethel yesterday,” he continued.

He signed off simply with: “Love, Jack.”

It was likely one of the last communications between brother and sister before Phillips left Southampton on Titanic’s maiden voyage — the intended destination being New York City.

He signed off simply with: “Love, Jack.”RR Auction

Four days later, the former post office employee, who celebrated his 25th birthday aboard the doomed liner, proved himself to a true hero of the wrecking.

During the sinking, he worked courageously sending wireless messages to other ships to beg them to navigate the treacherous ice fields and rescue the Titanic’s passengers and crew.

One of those telegraphs was sent to the Carpathia, the steamship which famously took aboard some 705 survivors from lifeboats two hours after Titanic finally sank at 2:20 a.m.

While Jack Phillips was a hero, he wasn’t the fictional Jack Dawson character played by Leonardo DiCaprio in the epic 1997 movie “Titanic.”Paramount

Phillips, who remained at his station and only abandoned ship when water flooded around his feet, wound up on an overturned collapsible lifeboat where he died of exposure due to the severe cold.

The young man, who had served on many vessels for the Marconi Company before being assigned to Titanic as Chief Radio Officer, kept in frequent touch with Elsie during his nautical career.

She saved almost 300 postcards he wrote to her during this time, including the Titanic “launch day” example which he mailed a few days before its sea trials and subsequent first and last voyage.

Bobby Livingston, executive vice president at RR Auction in Boston, Massachusetts, where the item is being sold, said: “Phillips often chose postcards which depicted ships on which he sailed.

“According to our research, only five of the 300 postcards retained by Elsie had any relation to Titanic, and only two featured the ship as the front photograph, making this an exceptionally rare example.”

Bidding for the postcard ends on April 14, and experts expect it to go under the hammer for at least $15,000.

In 2018, a postcard written by a maid aboard the vessel to a friend with the message “Wish you were here” was up for auction. It was mailed from Queenstown, now Cobh in Cork, Ireland, by Sarah Daniels to pal Nell Green on April 11, four days before Titanic went down.

Other notable Titanic-related memorabilia for sale at the Massachusetts auction house date from more recent times. They include a beige fabric life jacket and a dinner plate that were props in the Oscar-winning James Cameron flick starring DiCaprio and Kate Winslet.