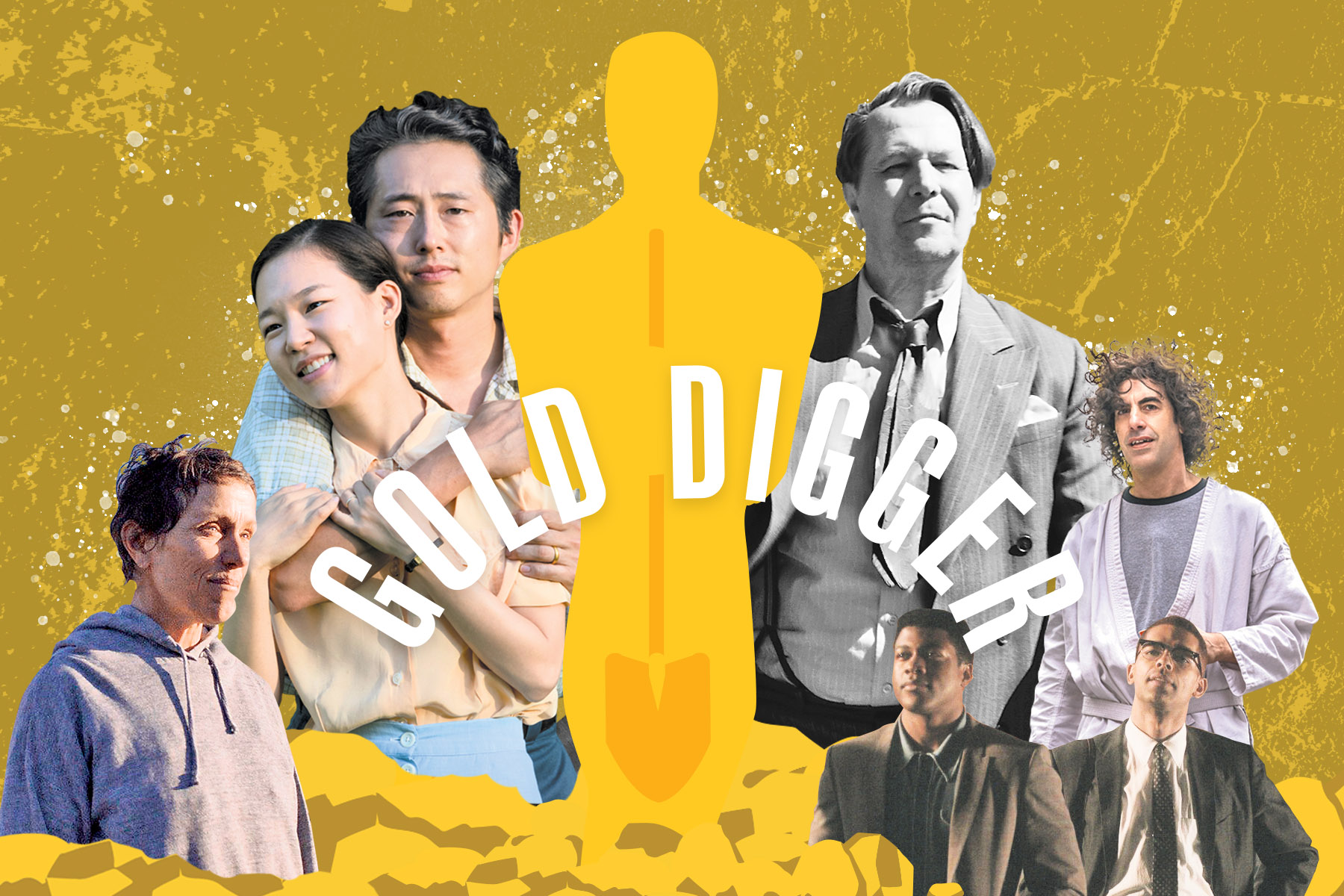 Welcome to the weirdest Oscars season ever.

Every aspect of the 2021 race is unprecedented: Many of the contenders have barely played a brick-and-mortar theater, the glamorous ceremony will almost certainly not be held in-person and it’s been pushed to April 25 due to the pandemic. Nonetheless, the tussle for the trophies is in full swing, with the Golden Globes airing Sunday.

Now, The Post kicks off its annual Academy Awards tracker — Gold Digger. First up, here’s who’s in the lead for Best Picture, a category in which as many as 10 films will be named when Oscar nominations are announced March 15.

Frances McDormand gets rugged on the road in Chloé Zhao’s movie “Nomadland.”AP

Director Chloé Zhao’s social-issues drama, starring Oscar winner Frances McDormand as a struggling woman who decides to make a home out of her van, has been the Best Picture front-runner since early fall. When other nervous contenders were kicking their theatrical releases far into 2021, “Nomadland” showed its swagger by having a well-received rolling premiere at the all-important Venice and Toronto film festivals instead. At TIFF, it snagged the people’s choice award, which the 2019 Best Picture victor “Green Book” also took home. Oscar-bait to the core, it’s already been named best film of the year by at least 13 critics groups, and is nominated for best drama in the film category at the Golden Globes. However, like any normal year, voters tend to get exhausted by a monthslong Goliath, and the excitement is waning.

“The Trial of the Chicago 7”

Sacha Baron Cohen, as Abbie Hoffman, and Jeremy Strong, as Jerry Rubin, bring tears and jeers in “The Trial of the Chicago 7.”Netflix

If “Nomadland” is for deep thinkers, Aaron Sorkin’s historical drama is the “vote your heart” option. Low on style, but big on passion, most of the Netflix film’s award recognition comes courtesy of the Golden Globes, where it’s nominated for best supporting actor in a dramatic film (Sacha Baron-Cohen), best original song (“Hear My Voice“) as well as screenplay and director (Sorkin). The Screen Actors Guild (SAG) also gave it an outstanding cast in a motion picture nod — and actors happen to be the Oscars’ biggest voting block. SAG + Globes = Watch out, Frances.

Gary Oldman charms his way around Hollywood as Herman Mankiewicz in “Mank.”AP

David Fincher’s biopic about “Citizen Kane” screenwriter Herman Mankiewicz would seem a primo Oscar contender by the usual standards: It’s about the movie business (check), is set in LA (check) and stars an Oscar winner in Gary Oldman (check). Hell, it’s even black and white (jackpot!). Not so fast. For one, the old wisdom that Hollywood loves itself is flawed. (While they are flagrant narcissists, that no longer translates to awards.) The last flick about LA moviemaking to win Best Picture was “The Artist” in 2011. But the more insurmountable hill is the topic: Orson Welles and “Kane” are, today, the preference of cinephiles with TCM subscriptions — not the average middle-class viewer. Still, with six nods, “Mank” is the most nominated film at the Golden Globes.

Steven Yeun, left, plays the father of an immigrant family trying to get by in “Minari.”Everett Collection

The shock success of Bong Joon-Ho’s “Parasite” last year changed the game for foreign films. Beyond just a small few, they had been relegated to the Best Foreign Language Film category, rather than allowed to vie for the big kahuna. But that memorable Best Picture win for “Parasite” has kept the momentum for subtitles going, this time for a Korean-American film called “Minari.” That said, this gentler family drama is a very different movie — not an unraveling thriller like Joon-Ho’s — and will have a harder time getting votes. But its SAG nomination for outstanding cast should secure it an Oscar nod.

“One Night in Miami”

A shoo-in for a nomination, but a long shot for the win, is Regina King’s directorial debut about what drove the friendship of Malcolm X and Muhammad Ali. Hugely popular with critics, the Amazon movie has had a trickier time on the awards circuit, mostly getting nods for its actors, especially Leslie Odom Jr. as Sam Cooke, and occasionally for King. One glimmer of hope: The film was, notably, runner-up for the people’s choice award at TIFF last year. Recent Best Picture winners to hold that same distinction include “Parasite” and “Spotlight.”