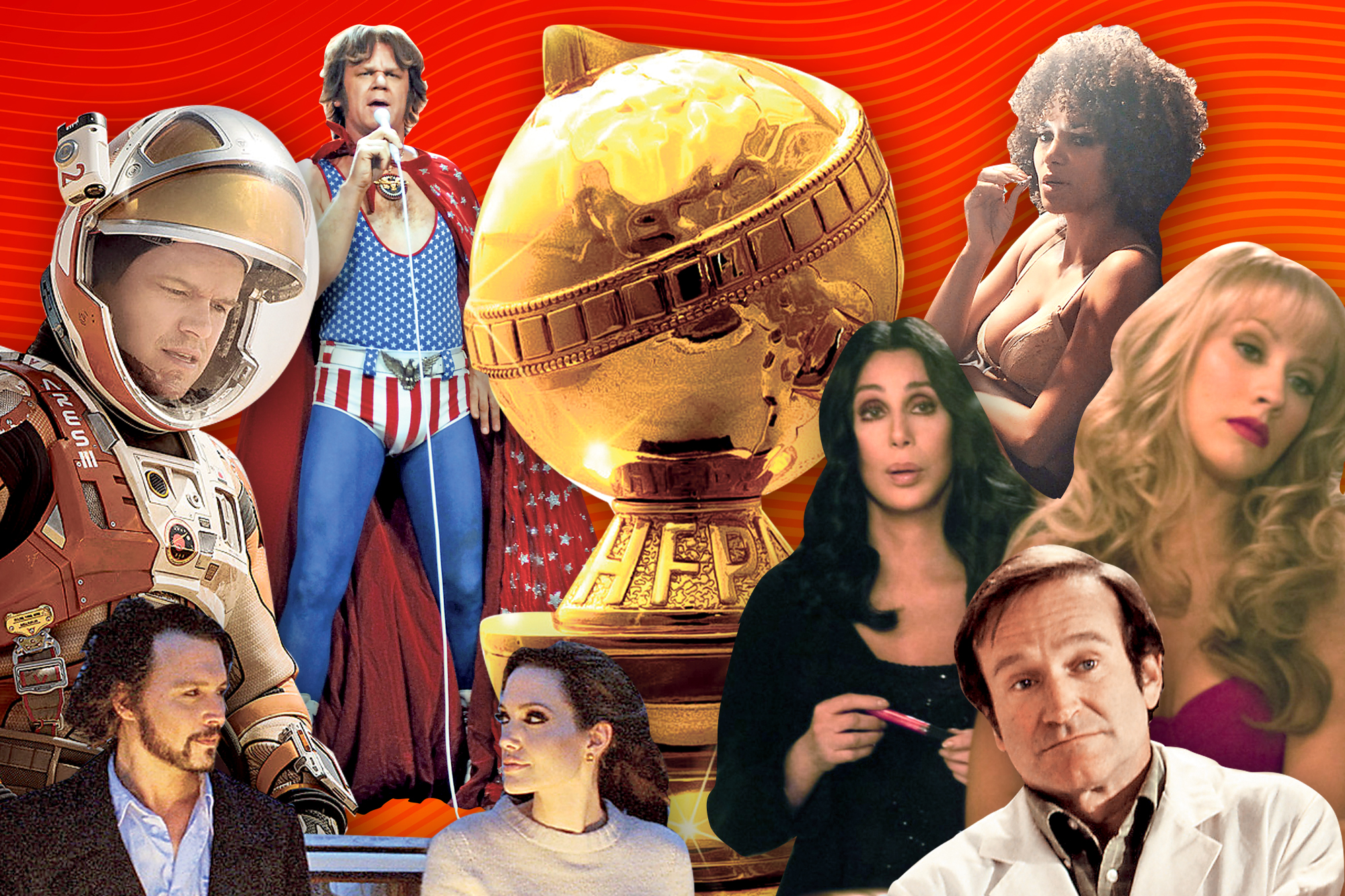 It’s a cherished American tradition: Once a year, we come together to question the integrity and taste of the Golden Globe Awards. And in 2021, the ceremony honoring film and TV has given us plenty of strange choices to whine about.

Last week, it was revealed that the Netflix show “Emily in Paris” reportedly flew ⅓ of the 90-person Globes voting bloc to Paris and put them up in the $1,400-a-night Peninsula hotel for a junket. The chic trip to the City of Lights might have helped net the show two nominations, including best comedy series.

Meanwhile, Sia’s nominated film “Music” is awash in controversy for its happy-go-lucky portrayal of autism. And to cap it all off, it was reported just days ago that the Hollywood Foreign Press Association, which puts on the ceremony, has zero black members. A banner year!

But the Globes have long provoked skepticism and outrage for its shady dealings and cuckoo picks. Here are some of the weirdest Golden Globes choices ever.

Pia Zadora shockingly won a new star of the year Golden Globe in 1982 for her turn as a nymphomaniac daughter in “Butterfly.” Analysis Film Release/courtesy E

A mystery still not fully explained is Pia Zadora’s new star of the year award in 1982 for her performance in the critically eviscerated drama “Butterfly.” The tawdry film is about an Arizona man (Stacy Keach) who starts up an incestuous relationship with his long-lost daughter Kady (Zadora), who just so happens to be super into that kind of thing. Gross. Times critic Vincent Canby said the newcomer’s sexualized performance was “like a Brigitte Bardot who’s been recycled through a kitchen compactor.”

When Zadora got the award, some lobbed accusations that her then-husband, Israeli billionaire ‎Meshulam Riklis, swayed the Hollywood Foreign Press Association by hosting a lavish press junket at the Riviera Hotel in Las Vegas, which he owned.

Still, she maintains she won her trophy fair and square. A few months later, her performance would also fairly earn her the Golden Raspberry Award for worst actress.

“Scent of a Woman”

Nobody would call “Scent of a Woman” a bad movie. It received Oscar nods, too, and Al Pacino rightly won an Academy Award for playing a blind lieutenant colonel. But it was never the season front-runner. (It competed against “A Few Good Men,” “Howard’s End,” “The Crying Game” and “Unforgiven,” which ultimately won the Oscar for Best Picture). So, when the film snagged the 1993 Golden Globe for best drama film, the HFPA found themselves in the midst of yet another controversy. Hollywood insiders were irate when it was revealed that many voters were flown out to New York to meet Pacino during the voting process. And nobody involved would say who paid for the starry jaunt.

Halle Berry got a best actress nod for 2010’s “Frankie & Alice,” but most audiences couldn’t see it until four years later.©Freestyle Releasing/Courtesy E

Another criticism frequently faced by the Globes is that it nominates stars solely to get them on the red carpet — A-list talent in D-list duds. That definitely tracks for Halle Berry’s 2011 best actress in a drama film nod for “Frankie & Alice.” The small Canadian movie about a stripper with a murderous split personality was skewered by critics, although some praised Berry’s work. Stranger still, most Americans weren’t able to see it. While “Frankie & Alice” had a limited release in 2010 to qualify for awards, its wide release was shelved till 2014.

The Golden Globes surprised everybody when “The Martian,” starring Matt Damon, was considered a comedy.©20thCentFox/Courtesy Everett C

What was the funniest part of “The Martian”? Was it when Matt Damon’s astronaut was stranded on Mars, seemingly destined to die alone? Or when he managed to grow potatoes to stave off starvation? Perhaps it was his harrowing final maneuver to reach the crew sent to rescue him. What was your favorite song in the movie? Oh, right, there weren’t any. All of the above is why people were scratching their heads when “The Martian” was nominated for — and won! — the “best motion picture — musical or comedy” prize in 2016. It edged out actual, um, comedies, such as “The Big Short,” “Joy,” “Spy” and “Trainwreck.”

Johnny Depp (“Alice in Wonderland,” “Charlie and the Chocolate Factory”)

Johnny Depp has been nominated for 10 Golden Globe Awards over his career.Warner Brothers / Courtesy Evere

For a solid 20 years, the slobbering HFPA would have nominated Johnny Depp for taking a walk around the block. From 1991 to 2011, the actor received a mammoth 10 Golden Globe nominations. Compare that to his lifetime three Oscar nods. Crazier than the sheer amount, though, were the projects themselves, including 2005’s “Charlie and the Chocolate Factory,” in which he played Willy Wonka like a Wisconsin drugstore clerk; 2010’s “Alice in Wonderland,” with his flame-haired Mad Hatter; and, worst of them all, “The Tourist,” also in 2010.

Angelina Jolie and Johnny Depp were mocked onstage by Ricky Gervais for their movie “The Tourist.” ©Columbia Pictures/Courtesy Eve

Critics absolutely slammed “The Tourist,” which was a remake of a 2005 French film, but it still managed a best musical or comedy film Globe nomination and undeserved acting nods for Depp and Angelina Jolie, who had an icy lack of chemistry. The inclusion was so roundly criticized, host Ricky Gervais mocked it in his monologue.

“It was a big year for 3-D movies,” he said. ” ‘Toy Story,’ ‘Despicable Me,’ ‘Tron’ — seems like everything this year was three-dimensional, except the characters in ‘The Tourist.’ “

Piling on, Gervais added: “I feel bad about that joke, because I’m jumping on the bandwagon. I haven’t even seen ‘The Tourist.’ Who has? But it must be good, because it was nominated.”

“Burlesque,” starring Cher and Christina Aguilera, was nominated for Best Picture – Comedy or Musical, despite being panned by critics.©Screen Gems/Courtesy Everett C

Remember when Christina Aguilera gave acting a shot? If you answered, “No,” you’re lucky. In 2010, she played an aspiring performer who moves to LA to make it big, only to wind up working in a basement-not-quite-strip-joint run by Cher. The Post’s critic Lou Lumenick said of Aguilera’s turn, “Her acting debut isn’t going to keep Anne Hathaway awake at night.” Still, it managed three Golden Globe nods, including best comedy or musical film.

You can bet your bottom dollar that John C. Reilly never dreamed of or anticipated receiving honors for his musical stylings. Leave it to the Globes to get there first. Reilly wrote the song for his character in 2007’s “Walk Hard: The Dewey Cox Story,” a comedic parody of Johnny Cash. The tune is perfectly fine, but has lyrics such as, “You know when I was a boy, folks used to say to me, ‘Slow down, Dewey, don’t walk so hard.’ ” Reilly ultimately lost to Eddie Vedder.

“Patch Adams” is considered a low point in Robin Williams’ career, but he got a Best Actor nomination anyway.©Universal/courtesy Everett / E

Robin Williams was one of our greatest comedic actors, but “Patch Adams” was easily one of his worst films. In the comedy, he played a suicidal man who becomes a medical student and questions the traditional doctor-patient interactions. He’d rather yuk it up instead. But, as Gene Siskel put it, “Who would want Mork at their bedside?” The film was an awkward mix of lowbrow jokes and extreme sentimentality, and Williams’ performance was cranked up to 11. Naturally, the Golden Globes nominated him for best actor in a comedy or musical film, as well as the lousy movie itself.

Wendy Williams Reveals Her Weekend Fun In A Recent Photo
Does Jordyn Woods Have A Twin? Celebrities Who Have Doppelganger Siblings!
Comment