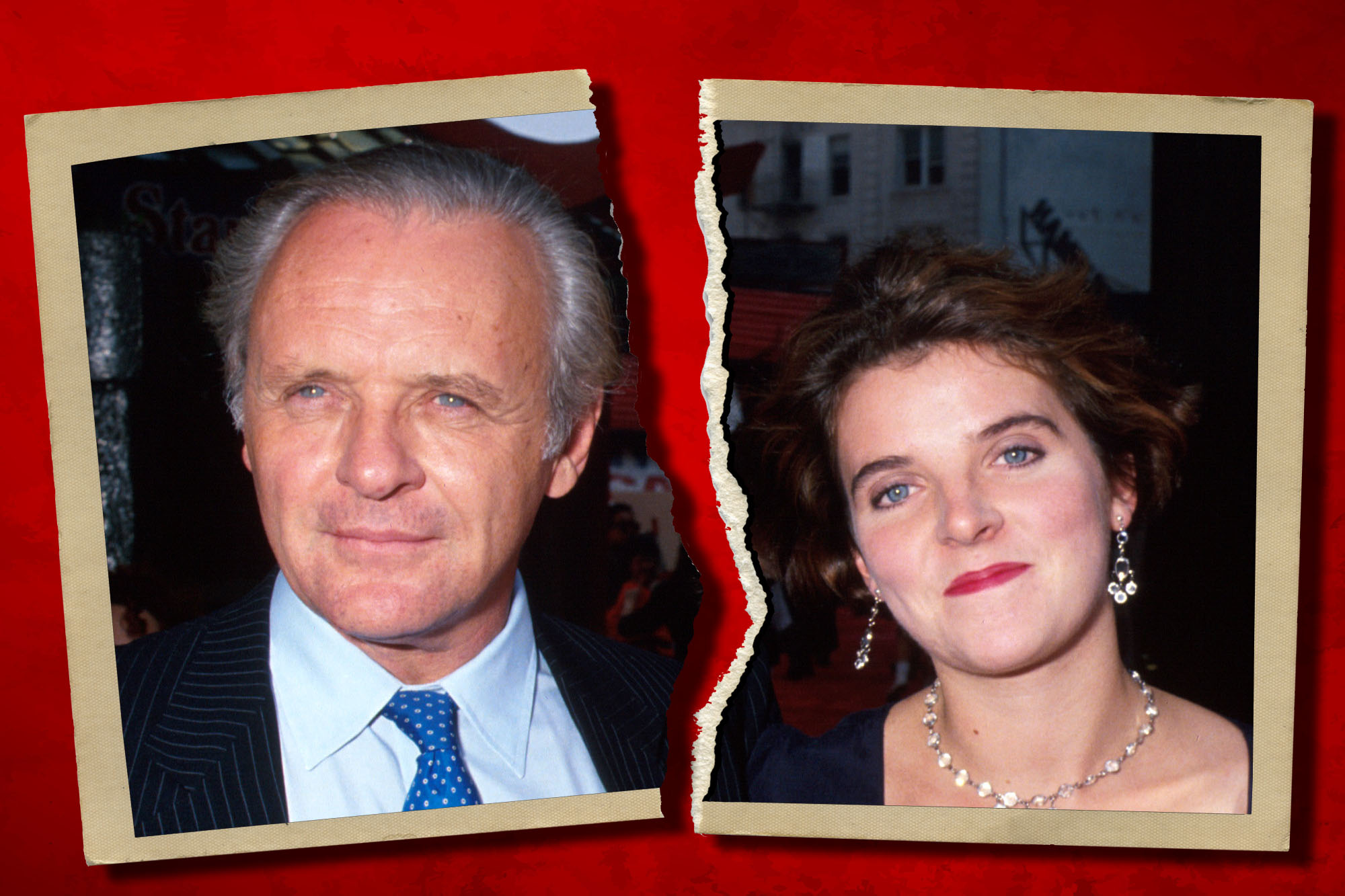 But art doesn’t imitate life in his latest role.

Hopkins, 83, is nominated for a Golden Globe for “The Father” and many expect him to get an Oscar nod. Critics have raved about his harrowing performance as a feisty, elderly Londoner succumbing to dementia while being cared for by his daughter, played by Olivia Colman.

In real life, Hopkins hasn’t seen his own daughter, Abigail — his only child — in more than 20 years.

In a 2018 interview, the actor was asked if he had grandchildren.

“I don’t have an idea,” Hopkins told Radio Times. “People break up. Families split and, you know, ‘Get on with your life.’ People make choices. I don’t care one way or the other.”

Sources close to Hopkins told The Post that Abigail, who is now 52 and a sometime actress and singer based in London, is a “complex and difficult” subject for him.

The same goes for Abigail, who has said that, as a teen, she contemplated suicide because of her fractured relationship with her father.

“She’s a sweet person who tries her best but there’s a lot of sadness to her,” a source close to her told The Post. “It hasn’t been easy for her. It’s not something she likes to talk about but you can tell it’s an ongoing struggle.”

Hopkins, who is twice divorced — and now married to a third wife, who has seemingly pushed him into ventures no one could have predicted — has never been known as warm and fuzzy. He once referred to Shirley MacLaine as “the most obnoxious actor” he ever worked with, and is famous for being blunt in interviews.

Over the years, he has blamed his relationship problems on a difficult childhood, having been bullied and gotten a late-in-life Asperger’s diagnosis. At the same time, he’s been candid about his struggle with alcoholism — he’s been sober since 1975 — and his own ferocious ambition to make it big as an actor.

When The Post asked Hopkins’ team for comment about Abigail — who, according to the source close to her, is not married and has no children — they said they had reached the actor when he was standing in line for his second COVID shot in Los Angeles.

“It was a painful time in my life and not something I can talk about,” is all he would say.

Glenn Harte, a Hopkins friend who speaks to him at least once or twice a week and shows the actor’s art at his Maui gallery, says Hopkins’ manner can sometimes be misinterpreted.

“It’s a tough situation for both [Hopkins and Abigail] and I feel bad for them,” Harte told The Post. “On one hand, Tony is his own person and never plays the game and doesn’t care what people think of him. Sometimes, though, that gives people the wrong impression. He can be very blunt. He’s also one of the kindest, most generous, most real people I’ve ever met.”

Hopkins was born in Port Talbot, Wales, in 1937, the only child of a baker and his wife. A poor student, Hopkins dropped out of school at 17. But he was so inspired by fellow Port Talbot native Richard Burton, whose autograph he got at age 15, he set his sights on the stage.

When he joined the National Theatre as a young man in the 1960s, his drive to be a star was as fierce, he once said, as his legendary bouts of drinking.

His third wife, Stella Arroyave, is said to hold the “reins” in their union.Getty Images

“I had nonspeaking parts, messengers and God knows what, and I was very disgruntled, because I wanted to be bigger,” he told The Guardian in 2018. “So I went to the casting ­director and said, ‘Who do you have to sleep with to get a part around here?’ I’d only been there three weeks!”

In 1966, he married actress Petronella Barker after meeting her while working on a play. But it was reportedly an unhappy union from the start and Abigail’s birth in 1968 didn’t repair it. Instead, Hopkins began spending more and more time away from home for work, and his drinking escalated. At his worst, the actor reportedly consumed as much as a bottle of tequila a day, although the actor has said that’s an exaggeration.

In 1970, he was reportedly so drunk that he missed a flight back to London and Pinewood Studios sent one of its secretaries, Jenni Lynton, to pick him up.Hopkins fell for Lynton, leaving his wife and toddler in 1972 and marrying her the next year. (They divorced in 2002.)

Barker was virtually alone as she raised their daughter in London. Abigail said in 2005, “I would see him, but maybe once a year . . . It has always been like that. See him, and then not.”

By the early 1970s, Hopkins was a star of the London stage. But he and Lynton moved to the US in 1974 so he could pursue a Hollywood film career. He found his niche with character roles in movies like “The Elephant Man” and “A Bridge Too Far,” but also toiled in TV mini­series such as “Hollywood Wives” and “Great Expectations.”

Meanwhile, back in London, his daughter was struggling with his absence.

“I came very close to killing myself,” Abigail told the Telegraph in 2006 of her teenage years. “It was the worst time I can remember. I totally abused my mind and body [with alcohol and amphetamines]. The root cause was the fact that my father and I had an intermittent relationship when I was young. I was angry and there was a lot of grieving going on.”

An insider in Hopkins’ camp says: “Tony can be very proud and stubborn. What he’s said [about Abigail, pictured] sounded so cruel.”Getty Images

But things shifted for both of them around 1991. Hopkins landed the life-changing role that would earn him an Oscar: Dr. Hannibal “The Cannibal” Lecter in “Silence of the Lambs.” And Abigail reportedly reached out to him.

Hopkins was suddenly, for the first time ever, seen in public with his daughter, on the red carpet at the premiere of his friend Jodie Foster’s film “Little Man Tate.” He arranged small parts for Abigail, an aspiring actress and musician, in his 1993 movies “The Remains of the Day” and “Shadowlands.” He also reportedly helped her buy an apartment.

But it apparently wasn’t enough to erase the past.Abigail “never forgave him for the way he treated her mother,” a friend told the Daily Mail. “She blamed him for his lack of love and kindness and she never got over that.”

Through a publicist, Abigail declined to comment for this story.

But the source close to her told The Post that Abigail has struggled in life both to overcome what was a distant relationship with Hopkins even in the best of times — and the specter of his enormous success.“

Her father cast a big shadow in every way,” said the source.Her father’s public words in recent years haven’t helped.

When told that his statements sounded cold, he responded, “Well it is cold. Because life is cold.”

“Tony can be very proud and stubborn,” a Hopkins insider told The Post. “What he’s said [about Abigail] sounded so cruel. I don’t know for sure but I think he’s felt rejected by her at times. It’s very complicated.”

As for Abigail, the source close to her said, “I think she’s actually more like her dad than she realizes. He was just somehow able to make a huge success out of his life.”

Anthony Hopkins is up for best actor in a drama, for “The Father” at this year’s Golden Globes, taking place Feb. 28. In it, he plays a man forced to move in with his daughter (played by Olivia Colman, above with Hopkins).AP

Unlike the hallucinating “Anthony” of “The Father,” who frightens his daughter with rages and verbal abuse, the real-life Hopkins is still sharp as a tack.

From the cliffside home in Malibu where he lives with his third wife, 64-year-old Stella Arroyave, he churns out films at the rate of a young man, composes, paints — and is an ­unlikely social-media star. He has close to 1 million followers on TikTok and went viral last fall dancing to Drake’s “Tootsie Slide.”

By many accounts, since their 2003 wedding, Arroyave has turned irascible Anthony Hopkins the actor into Anthony Hopkins the empire — pushing him into selling his art in galleries around the world, encouraging his musical compositions, and even helping develop a product line consisting of a “gender-neutral” perfume called “AH Eau de Parfum,” as well as a “home fragrance candle” and “Diffuser Collection.”

Proceeds from the line, including the Anthony Hopkins Gardenia Tuberose Candle, go to the No Kid Hungry national campaign to end childhood hunger in America.

Arroyave also got her husband to co-star in her directorial debut, a film called “Elyse,” about an emotionally disturbed woman loosely based on ­Arroyave’s own mother.

“Early on while watching ‘Elyse,’ you may find yourself wondering why on earth Anthony Hopkins agreed to appear in such a wan, amateurish drama,” The Hollywood Reporter wrote in December. “The answer becomes apparent when one examines the credits — the film marks the directorial debut of Stella Hopkins, and if you think the last name is a coincidence, it’s not.”

Jimmy Esebag, 60, the French-born multimillionaire and chairman of America’s Licensing Brand, which owns the rights to the Playboy brand among others, told The Post that he had to sue ­Arroyave over a business dispute in 1994.

The suit was ultimately dismissed.

“Only she wouldn’t give them back,” Esebag told The Post. “I had to go to court. She’s a very shady lady. I couldn’t believe it when I found out she married Hopkins.”

Hopkins’ team did not return a request for comment from Arroyave, but a source close to Arroyave said: “It was a frivolous lawsuit to begin with … and only came to [public] light when Stella married Tony.”

A year after Esebag’s run-in with ­Arroyave, she filed for bankruptcy in Los Angeles Superior Court. A 68-page document obtained by the Daily Mail indicated she owed 37 companies or people money and had almost nothing in assets.“I don’t think Hopkins knew that much about her past,” Esebag said. “I ran into them once and Hopkins warned me about saying anything bad about her. But I bet there’s more to come from her.”

Hopkins, for his part, has said Stella made him happy after years of being “bad with relationships.”

“She’s a wonderful woman who likes to spend money,’” he said in a 2013 interview, “and even as I am sitting here talking to you, is out spending my money. It’s all gone, whoosh. But she’s very good for me, my wife, because she slows me down.”

Hopkins pals like Harte and philanthropist and celebrity dentist Dr. Bill Dorfman say Stella is the best thing to ever happen to Hopkins. And that, just maybe, she has found a way to distract him from his past.

“The timing was perfect for them to meet,” Harte said. “Tony’s not very interested in business or money. He needed a dynamic person like Stella to come in and take the reins. She keeps him busy and working, which he loves. And she babies him. What man doesn’t love that?”