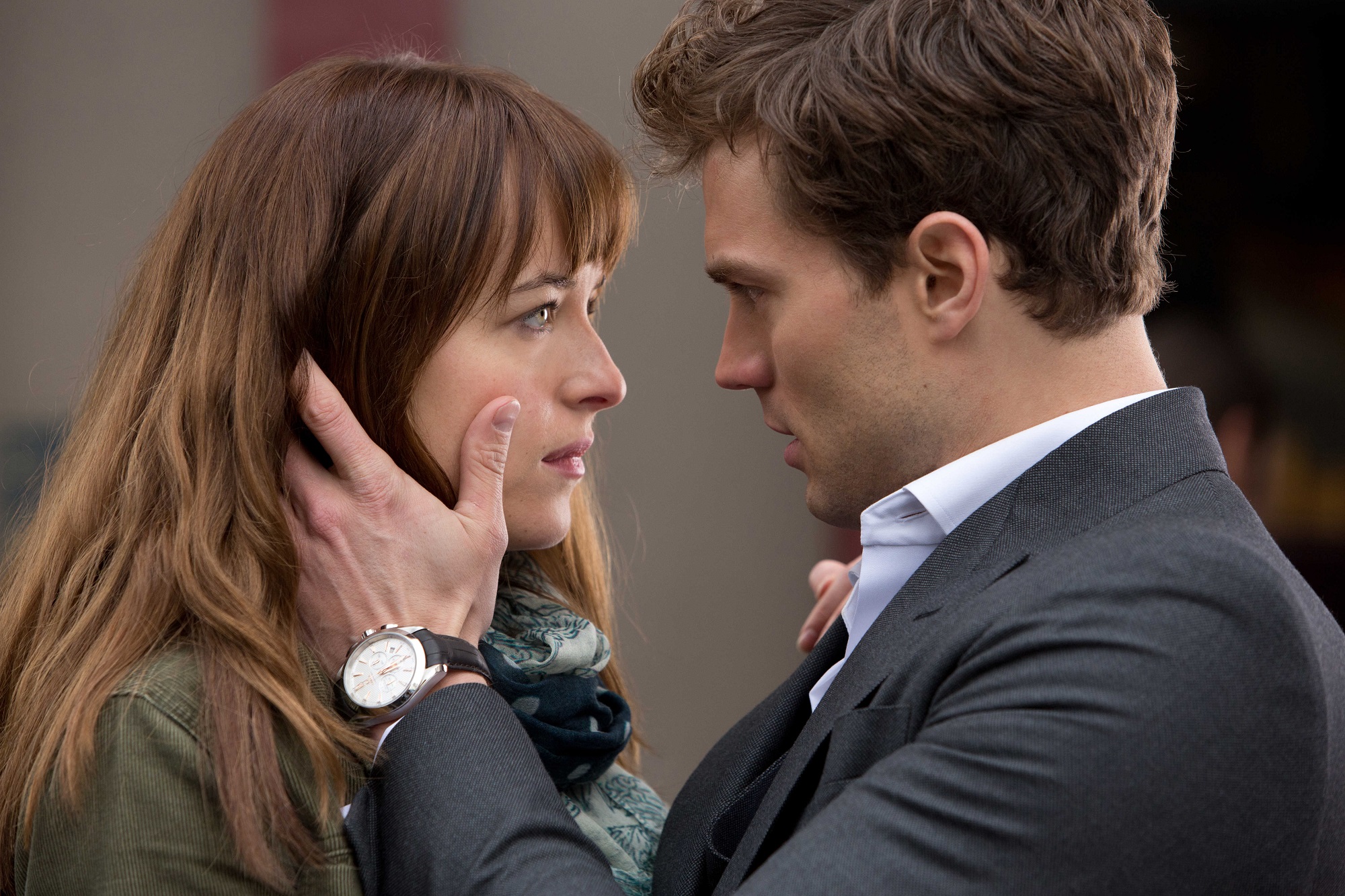 Valentine’s Day: The perfect time for happy couples to enjoy a pot of fondue by candlelight at a buzzing restaurant, make out on a street corner and, perhaps, pack into a movie theater to see a rom-com.

Like its trollop progeny “Gossip Girl,” “Cruel Intentions” makes us fear for New York high school graduates who learn nothing and are morally depraved. The steamy plot is a web of lies in which two teens (Sarah Michelle Gellar and Ryan Phillippe) seduce a girl (Selma Blair) to get revenge on another student. What would the guidance counselor say? — JO

“Fifth Shades of Grey” is streaming on Peacock.Chuck Zlotnick

You’re not watching this one because it’s good (it isn’t), you’re watching because it’s hot-larious. After lucky intern Anastasia Steele (Dakota Johnson) begins seeing sexy rich guy Christian Grey (Jamie Dornan), their romance turns into “Kama Sutra: Mansion Edition.” These two get it on every which way, in every room on every surface with whips and paddles galore. So, the acting’s a crime. That’s OK because Christian’s got handcuffs! —JO

I <3 the ’90s! “You’ve Got Mail” (HBO Max) “You’ve Got Mail” is streaming on HBO Max.©Warner Bros/Courtesy Everett For our younger readers: In the ’90s, there was a shiny new Internet service called AOL. We would spend several minutes “dialing up” to turn it on, and then we would excitedly read our one to two weekly emails. When we got a new message, a man would loudly say “You’ve got mail!” Simpler times. In this comedy that borrows the phrase, a man and woman who hate each other in-person (Tom Hanks and Meg Ryan) fall in love anonymously online. — JO “My Best Friend’s Wedding” (Netflix) “My Best Friend’s Wedding” is streaming on Netflix.©TriStar Pictures/Courtesy Everett How does one pick Julia Roberts’ best rom-com? “Notting Hill,” “Runaway Bride” and “Pretty Woman” are all delightful and make the choice a difficult one. But the edge goes to “My Best Friend’s Wedding” for a fantastically annoying early-career performance from Cameron Diaz and Rupert Everett’s easy British charm. While it boils my blood that the 26-year-old main character (Roberts) is the most influential food critic in America, I am comforted by the thought of my own devoted readers out there (Hi, Mom! Hi, Dad!). — JO Cry Me a River “Queen & Slim” (HBO Max) “Queen & Slim” is streaming on HBO Max.Campbell Addy/Universal Pictures This 2019 drama follows Queen (Jodie Turner-Smith) and Slim (Daniel Kaluuya) as they find themselves on the run after their first date ends in a violent confrontation with a cop. Think modern-day “Romeo and Juliet” meets “Bonnie and Clyde.” It doesn’t have a “happily ever after,” but there’s plenty of heart along the way. — LS “Love, Simon” (Hulu) “Love, Simon” is streaming on Hulu.20th Century Fox Licensing/Merch This 2018 hit was notable for being among the first mainstream LGBTQ rom-coms. Based on a YA novel by Becky Albertalli, the story follows closeted gay high schooler Simon (Nick Robinson) as he finds love — and himself. The ending might be happy, but expect tears from his emotional confrontation with his father, Jack (Josh Duhamel). — LS “The Big Sick” (Amazon) “The Big Sick” is streaming on Amazon.AP Based on the rocky, real-life romance between star Kumail Nanjiani and his now-wife Emily V. Gordon — who wrote the 2017 film together — the story follows their early tribulations as a biracial couple (Nanjiani is Pakistani-American and Emily is white). If parental disapproval and cultural clashes weren’t enough of an obstacle, Emily is hospitalized and goes into a coma. — LS Heart and LOL “My Big Fat Greek Wedding” (HBO Max) “My Big Fat Greek Wedding” is streaming on HBO Max.©IFC Films/Courtesy Everett This modern classic (2002) follows the impending nuptials between Toula (Nia Vardalos), who comes from a large and traditional Greek family, and Ian Miller (John Corbett), who’s decidedly out of his element. Toula’s quirky relatives steal the show, including her surly father Gus (Michael Constantine), her savvy mother Maria (Lainie Kazan) and her wacky aunt (Andrea Martin). — LS “Always Be My Maybe” (Netflix) “Always Be My Maybe” is streaming on Netflix.Courtesy of Netflix Come for the laughs in this 2019 rom-com that follows the second-chance love between estranged childhood friends Sasha (Ali Wong) and Marcus (Randall Park), stay for the uproarious cameo from Keanu Reeves, in what’s arguably his most side-stitching minor performance of recent years. — LS “Crazy Rich Asians” (HBO Max) “Crazy Rich Asians” is streaming on HBO Max.AP This 2018 hit is a Singaporean spin on “Meet the Parents,” when Nick (Henry Golding) brings his American girlfriend, Rachel (Constance Wu), to his home country for a wedding — and neglects to tell her how famous and uber-rich his family is. Misunderstandings and high jinks ensue, along with fabulous costumes and lavish scenery. — LS