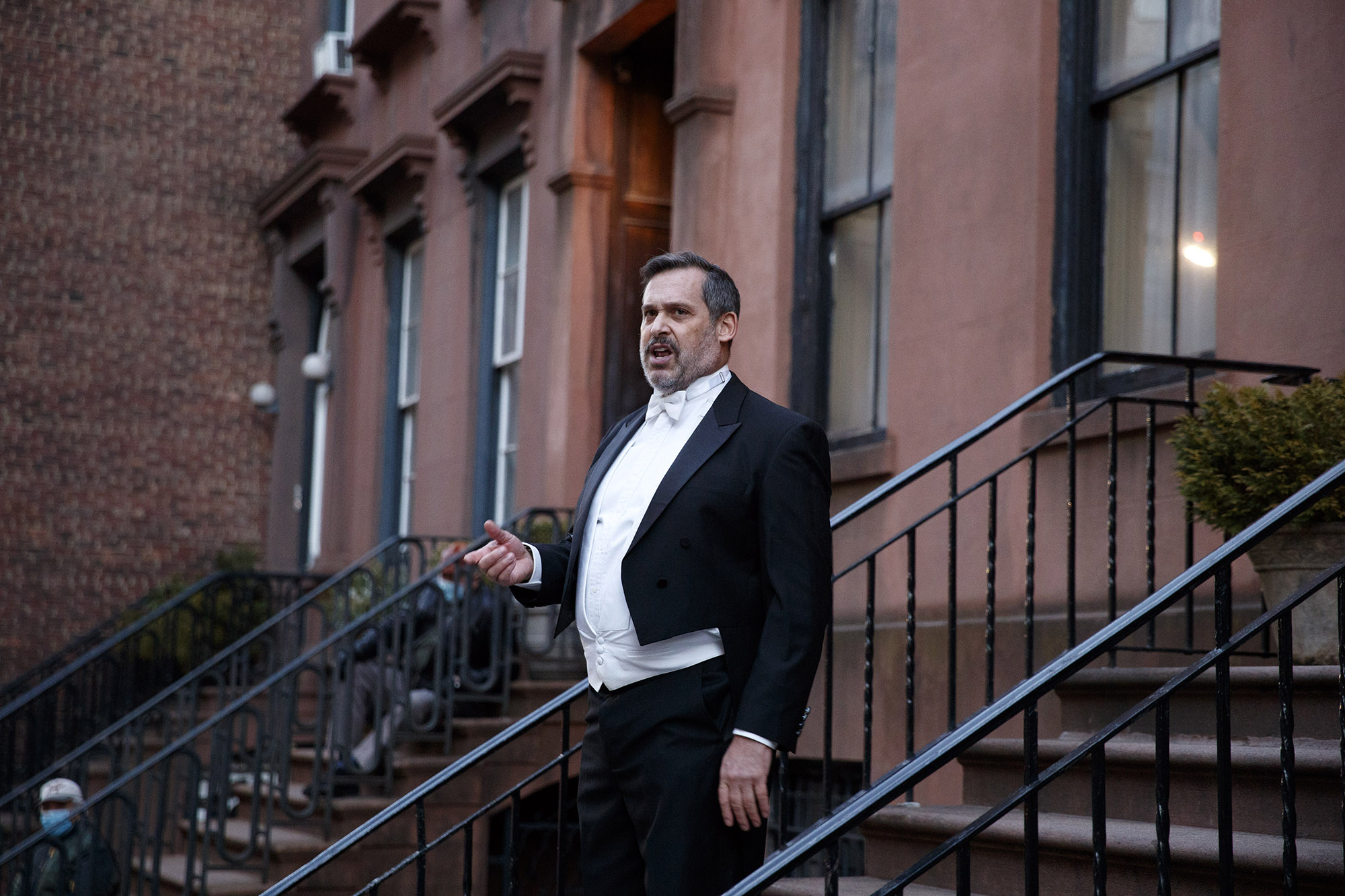 Call him the brownstone baritone.

“Sometimes there’s a drone [of street noise] as soon as I’m finishing my softest number,” said Peter Clark, 56, who hosts a weekly concert from a stoop on Hicks Street in Brooklyn Heights. “And don’t get me started on the Fresh Direct trucks.”

Despite the hum of garbage trucks, car horns and the occasional drill, Clark puts on one of the most unique live shows in town. The opera singer and musical theater performer first went out to sing in his building’s garden on May 1, the same night he was set to make his debut at the Tri Cities Opera in a production of “A Little Night Music,” postponed indefinitely due to the pandemic.

“I didn’t want to jump into the pity party,” said Clark, whose neighbor encouraged him to join the 7 p.m. cheer to celebrate the city’s health care workers. “I brought down my speaker and started singing a song from ‘Carmen.’ ”

Since then, Clark, who has lived on Hicks Street for 24 years and teaches music at St. Ann’s School, has performed 154 alfresco concerts. Before the pandemic, he enjoyed onstage roles including Henry Higgins in “My Fair Lady” (Ashlawn Opera) and Sweeney Todd at the St. Petersburg Opera. Lately, he has a returning audience of 25 or so locals, mostly seniors who enjoy resonant renditions of arias and Broadway standards.

At first, Clark did 100 shows in a row, then took a break in early August. In the fall, he started up again, singing to the street on Monday, Wednesday and Friday evenings until he was chased down the block by annoyed neighbors. “People in my building were getting over it,” said Clark, who hypothesized that members of the co-op felt awkward leaving the building mid-show. “So we just went up the block to Rita’s.”

Peter Clark, a baritone, sings for his neighbors every week from a stoop in Brooklyn Heights. Brian Zak/NY Post

Rita Schwartz, 83, a longtime Hicks Street resident and classically trained musician, was happy to host the show on the steps of her brownstone. “The acoustics are better at my house, anyway,” said Schwartz, who gives out Hershey’s Kisses to audience members. “We’re all connected because he’s brought us all together,” she said.

“I gave up pursuing musical theatre years ago,” said Sarah Orlando, 49, a fellow resident who moved from Bellevue, Wash., to Brooklyn Heights about 15 years ago with dreams of being on Broadway. One evening last December — it was a Wednesday, as Clark only performs one night a week during the winter — she walked by his concert, calling the run-in “serendipity.”

After the show, Orlando struck up a conversation and offered herself up for a duet. “We started talking about Sondheim,” said Orlando. The duo began rehearsing the song “Barcelona” from the musical “Company” that night, and performed it in full on the stoop a few weeks later.

Since then, the redheaded church choir conductor has performed renditions of “Broadway Baby,” “Adelaide’s Lament” from “Guys and Dolls” and “Send in the Clowns” from “A Little Night Music” in the four shows she’s been a part of. “I’m more confident in my upper register than I’ve been in years,” added Orlando, who works as a corporate communications copywriter.

Even Clark’s downstairs neighbor, Patricia Roberts, who called working from home beneath an active opera singer an “interesting experience,” catches the weekly sets, which she said also bring her “joy.” “When you think of people working remotely, you think of office workers,” said Roberts, a financial adviser.

“Some people have barking dogs in the backgrounds of their Zoom calls,” she said. “I have the Metropolitan Opera.”