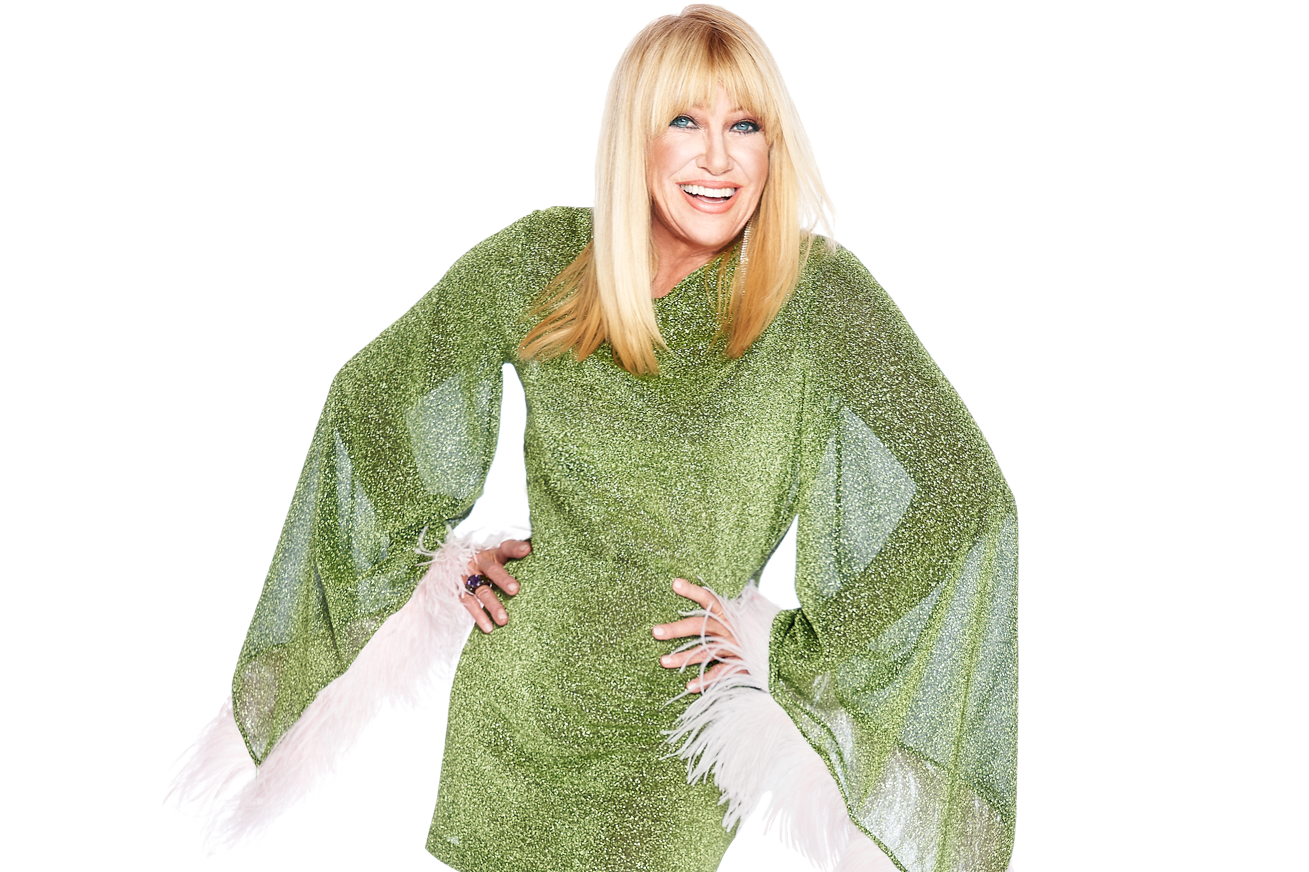 Suzanne Somers is packing up hundreds of thousands worth of old clothes to give to charity after listing the home she’s lived in since 1977 for $8.5 million.

Somers on Friday alone sent over 50 pairs of shoes, including coveted Manolo Blahniks. Hamel estimated he’s donated “52 pairs of pants, some from the ’70s,” while, “Suzanne is sending over all these incredible dresses … I joked that at Revivals they must have a Suzanne Somers kiosk.”

Sales at the local shop go to the Desert AIDS Project.

Suzanne Somers is donating many of her fashions, including this dress, after listing her longtime Palm Springs, Calif., home.Courtesy Suzanne Somers

Meantime, Somers told us, “Never in my life did I ever think I’d let go of this house, and this property … We’ve had Thanksgivings here for 43 years.” But, “all of  sudden it’s just a good idea.”

She recalled one star-studded birthday party years ago when a list of famous pals took over the outdoor theater to perform. “I’d over-invited by 50 percent, thinking half of them won’t come from LA,” she recalled. “They all came.”

She asked pal George Schlatter — famed director of “Rowan & Martin’s Laugh-In” — to help with the bash. Merv Griffin emceed the private gig, where Robert Goulet performed tunes from “Man of La Mancha,” Keely Smith sang her hit “That Old Black Magic,” and Barry Manilow closed the show with “Copacabana.” Also performing at the birthday were Somers and Susan Anton.

But Somers said she’ll most miss some more unlikely regular guests. “There are herds of bighorn sheep that live on the property,” the “Three’s Company” star told Page Six. “Wherever we go, we run into bighorn sheep.”

When the Hollywood couple were listing the home, a scion from venerable banking family was the first to take a look. “She came over with her real estate agent and her architect,” the couple told us. “Suddenly a herd of bighorn sheep showed up on cue! She starting taking pictures, saying, ‘This place is magical.’” (The heir, however, apparently decided she needed a place where she could entertain over 100 guests at a time.)

One prized possession Somers and Hamel will leave behind for future owners is “Big Al’s Bar,” which they salvaged from their Malibu home when it burned in 2007, and which features in Somers’ regular Facebook Live posts.

“One of the hardest things for me to give up is the bar,” Somers said. But Hamel added, “at the new place we have an indoor/outdoor bar for parties, for guests, and another outdoor bar for two of us.” They reportedly bought a nearby 4,800-square-foot home for $2.35 million in 2019, which they’ve been remodeling.

Somers — whose wellness books include the recent “A New Way to Age” — has been recovering after a spill down the stairs at the Palm Springs estate last year. But she told us, “The good news about my having to be on my back [is that] two more books popped into my head. They’re both vibrating as best sellers, I don’t know which to do next.”

She hinted one could be based on the success of her recent “Gut Renew 30-Day Challenge.”