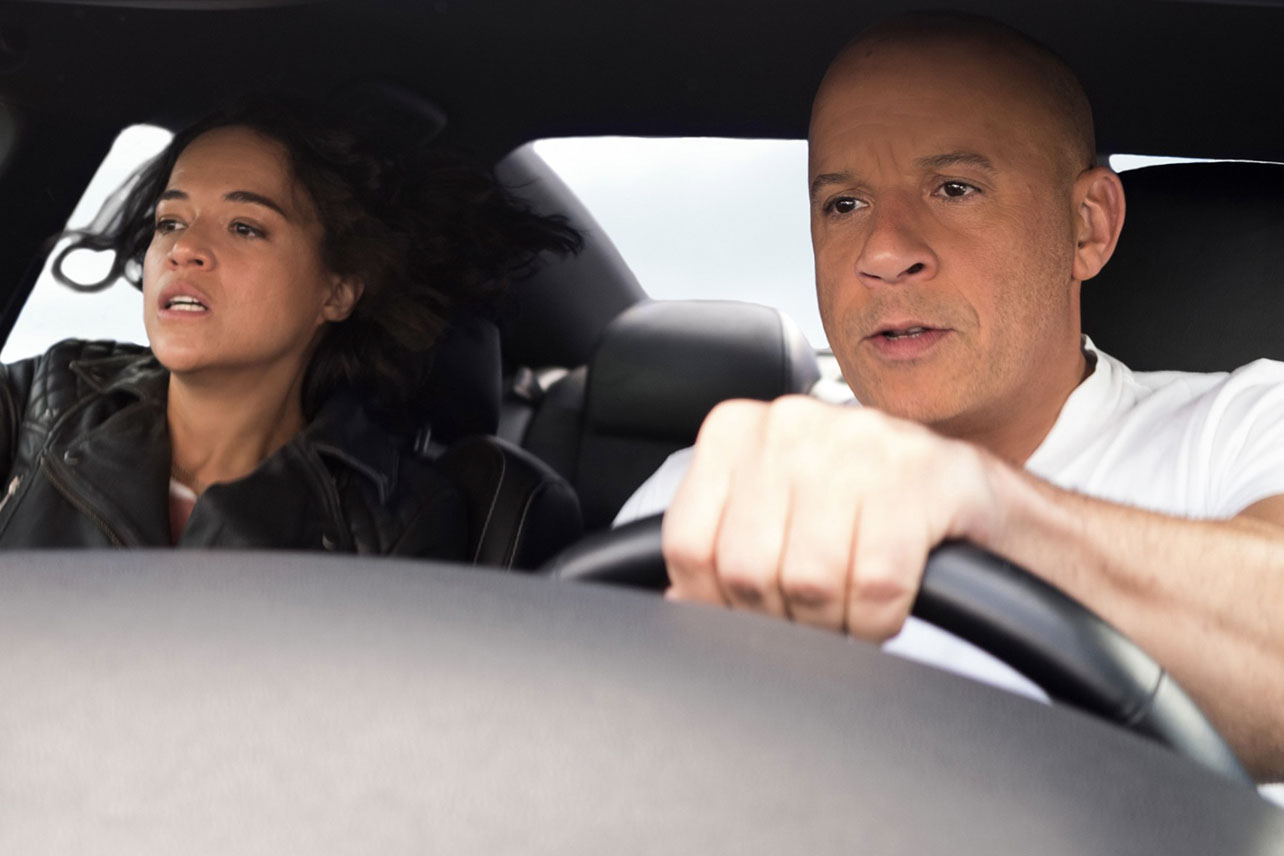 “We’re all stuck driving in the same s–tty circle,” says Michelle Rodriguez’s character Letty in “F9: The Fast Saga.” “And we’re never getting out.”

Besides expressing Letty’s vague existential crisis, Rodriguez is also speaking for us cranky critics who wonder just how many more atrocious “Fast & Furious” movies we will be forced to endure. The series has been trudging along for 20 years (!!!), and boy it is showing its age. The tires are flat, the bumpers have rusted, this hunk of junk has at least a million miles on it.

But, dammit, we’re never getting out.

For Letty and Dominic (Vin Diesel), it’s not for lack of trying. At the start, they’ve abandoned the open road for domestic bliss by settling on a distant farm with Dom’s little son.

Replies Dom: “That’s the price we pay for peace and quiet.”

The screenplay is not by Laura Ingalls Wilder, but director Justin Lin and Daniel Casey.

Michelle Rodriguez and Vin Diesel are back behind the wheel in
“F9: The Fast Saga.”

But serenity is obliterated when Dom and Letty are thrown back into the international espionage game after they learn Mr. Nobody (Kurt Russell) captures Cipher (Charlize Theron). (Every returning character from the previous films is impressively unmemorable). That’s bad because Cipher is a maniacal genius who can put together a device called Ares, which gives its owner control of the world’s weapons. You know the drill.

“Ares is the god of war, right?,” says one bozo in the group’s lair that reminds me of Mr. Freeze from “Batman & Robin.” “If he [Mr. Nobody] gets his hands on this, he’ll be the god of… everything.” Every character speaks with the wide-eyed seriousness and limited vocabulary of a stoner on a couch.

The other complication is that Dom’s estranged brother Jakob (John Cena) has joined the supervillain business and is aiding Cipher in her revenge plot. The meathead siblings haven’t seen each other since they were young because Dom believes Jakob’s negligence led to their racer pop’s death.

I don’t mind Diesel and Cena starring in movies like this, because it helps keep them out of other, better movies. But to see folks such as Helen Mirren (doing her weird cockney accent again), Russell and Theron’s talents wasted on such schlock is a shame.

At least we can enjoy the stunts and cool cars, right? Meh. The racers drive through a Mexican jungle with conspicuously road-like paths. And the supposed good guys also wreak havoc on Tbilisi, Georgia, with an electromagnetic truck that leaves wreckage akin to a terrorist attack. All of these sequences look much more staged and faker than the earlier films.

But nothing is as ludicrous as one scene featuring, well, Ludacris. The actor’s character Tej, alongside Roman (Tyrese Gibson), drives a Pontiac Fiero with a rocket strapped to it into outer space to disable a weapons satellite. They crack jokes and eat snacks.

It’s a moment that would’ve pushed the limits of absurdity in “Austin Powers,” which to be fair, is what the “Fast & Furious” franchise has become: a laughable parody.