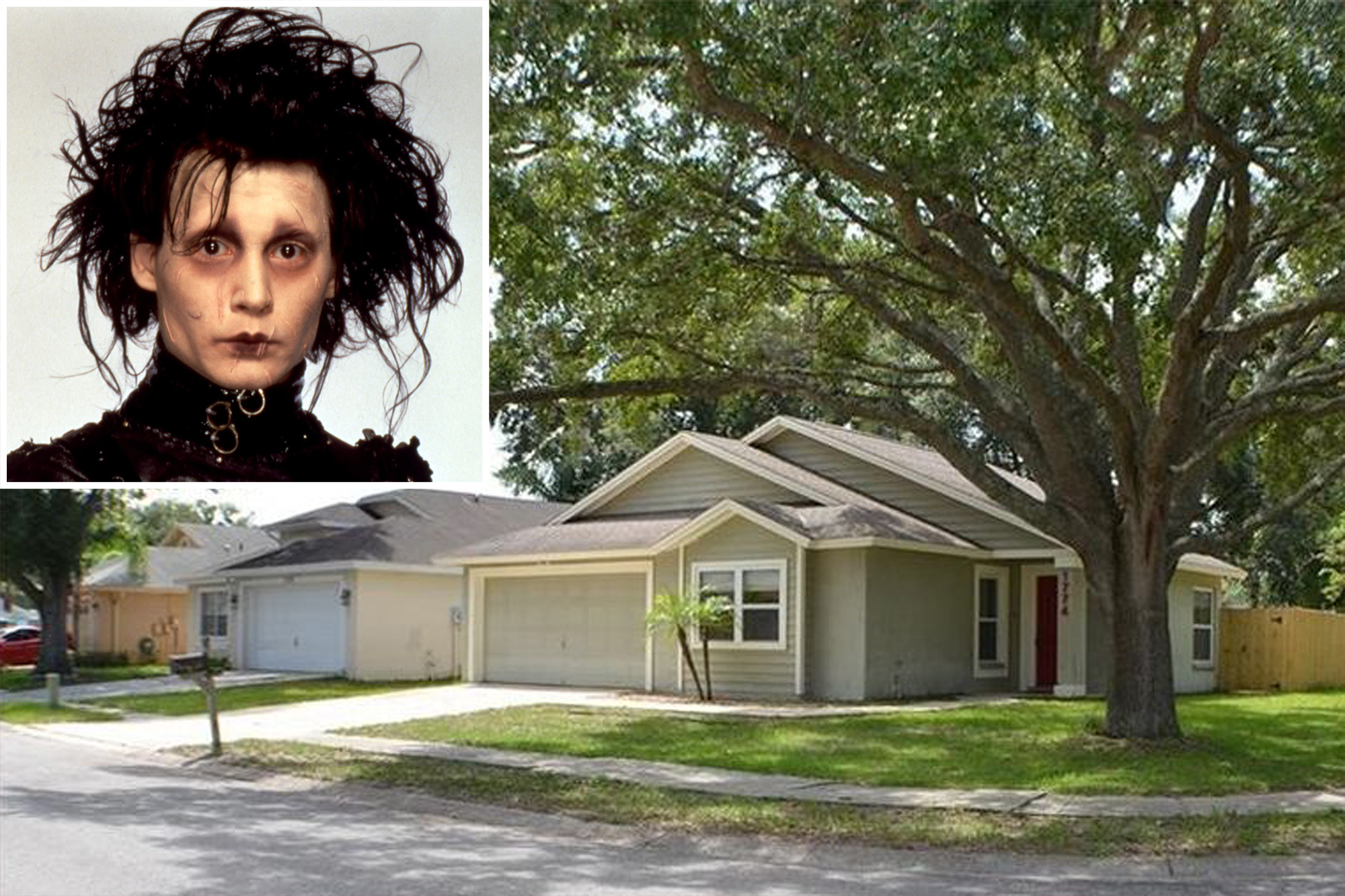 No — the houses aren’t really all painted in pink, yellow and green pastels. There are no dinosaur-shaped topiaries, and there’s no dark castle at the end of the lane.

But Lutz, Florida, where the 1990 film “Edward Scissorhands” takes place, really is a typical “American dream” suburb as critiqued in the dystopian Tim Burton film.

Scroll through to see more about the setting locations.

Where did they film “Edward Scissorhands”?

If you need a refresher, here’s how the movie went down: Led by well-intentioned Avon lady Peg Boggs (Dianne Wiest), the fictional town in real-life Florida embraces Scissorhands until novelty transforms into fear. The neighbors ultimately force him back out of the town.

This is the house where the Boggs lived in the “Edward Scissorhands” movie. Today, the three-bedroom, two-bathroom house is painted green with a red door. It doesn’t have a “The Boggs” knocker anymore,

The original movie starring Ryder and Depp was shot on Tinsmith Circle, a cul-de-sac in the Carpenter’s Run neighborhood of Lutz, outside Tampa, Florida. And the Avon lady’s house, the nasty boyfriend’s house and the nosy neighbors’ houses are still standing fairly untouched three decades later.

Director Burton chose the then newly built street because it reminded him of his cookie-cutter hometown in California, which inspired the film, according to the Independent.

Inside, the living room has the same pointed ceilings and sliding glass door as in the scene where Peg first tells Scissorhands about her daughter Kim — and where at the end of the movie, Kim realizes her feelings for him.

In the movie, the “Avon lady” Peg Boggs — mama to blond cheerleader Kim, played by Gen X queen Ryder, more recently known for her “Stranger Things” performance — takes Scissorhands into her blue ranch home, which is actually located on the corner at 1774 Tinsmith Circle in Lutz.

Today, the three-bedroom, two-bathroom house is painted green with a red door. It doesn’t have a “The Boggs” knocker anymore.

The house does have a respectable, 0.17-acre fenced suburban yard — the same yard where Scissorhands woos the town with his haircutting abilities at a Boggs family barbecue.

A small set of palm trees and a large tree have overgrown in the front, though — if Scissorhands resided there, he would have been sure to trim it.

The wood-veneer kitchen cabinets and countertops are original, according to Realtor.com.

Inside, the living room has the same pointed ceilings and sliding glass door as in the scene where Peg first tells Scissorhands about her daughter Kim — and where at the end of the movie, Kim realizes her feelings for him.

The house is mostly untouched since the movie was shot in 1989. The wood-veneer kitchen cabinets and countertops are original, according to Realtor.com. In fact, most of the kitchens on the street still have wood-veneer countertops, like those seen in the flirtatious neighbor Joyce’s house during one of the movie’s opening scenes, where she flirts with a dishwasher repairman.

The bathroom of the house has been renovated since the movie was shot, according to Realtor.com.

The owner’s bathroom and bedroom flooring have been renovated, and while the movie-house had white carpeting, today the floor is ceramic tile.

The house was last purchased in September 2020 for only $230,000 and represented by Stacie Savoy with Berkshire Hathaway HomeServices Florida Properties Groups – Wesley Chapel, according to the listing.

Pictures of 1844 Tinsmith Circle are not available, but a similar slate-blue house on the same street is pictured here.

In the film, Peg’s boyfriend Jim (Anthony Michael Hall) tricks Scissorhands into using his hands to break into his locked-up father’s house to steal valuables he can sell for a new van. Scissorhands takes the fall when Jim flees the scene, causing the town to start distrusting the soft-spoken teen.

Bloggers and news outlets have pegged the house at 1844 Tinsmith Circle as the filming location of the movie break-in, although slight window shape differences of the facade make it unclear whether that’s actually the case.

Either way, the three-bedroom, two-bathroom home retains the character of the movie, with the large two-car garage out front and the arched window over the door. The house at 1844 Tinsmith Circle is now slate-blue instead of green. It has hardwood floors, wood-veneer cabinets, a covered patio and a fenced-in yard.

A fenced-in backyard on Tinsmith Circle is pictured here.

In the movie, neighbors seem to spend endless hours watering their yards with a hose and mowing them down with a push mower while they spy on their neighbors.

But the fenced-in yards of Tinsmith Circle don’t have those same perfectly manicured lawns — the neighborhood is a bit more overgrown than in the movie. Tall trees and un-sculpted bushes partially block street views of some of the houses.

Such large garages probably aren’t necessary — there are only 0.7 cars per capita on average in that zip code, according to Trulia.

Two-car garages define the facade of the suburban homes in Lutz, though they don’t have the signature diamond-shaped designs from the movie. Such large garages probably aren’t necessary — there are only 0.7 cars per capita on average in that zip code, according to Trulia.

These garages also show up in the new Cadillac commercial, in which Edward and Kim’s teenage son Edgar — a black leather-clad Chalamet who also has scissors for hands — receives a self-driving car (scissor hands aren’t conducive to driving).

While the houses may not retain their Easter-like colors, in many other ways, the houses on Tinsmith Circle are exactly the same as they were when they were used as a set three decades ago, with tiled floors, high peaked ceilings and trendy ’80s architecture.

Even the economic landscape is representative of the American dream, with a low cost of living and higher-than-average income. The typical household income is $69,000 — $6,000 more than the national average, according to the US Census.

Meanwhile, the average home on Tinsmith Circle was built just before the movie, in 1989, and today costs only $240,000 — which is slightly less than the average in Florida and significantly less than the US average, according to Realtor.com sales data over the past year.

It never snows in Tampa

The one thing missing in real-life Lutz is snow.

In the movie, an elderly Winona Ryder says that Edward Scissorhands is the one who makes it snow in Lutz, Florida. He does so by shaving ice up on his dark mountain mansion. But Tampa hasn’t seen snow since before the movie, on January 19, 1977, according to local reports.

Next time it snows, we’ll be sure to look out for our favorite serrated style icon.