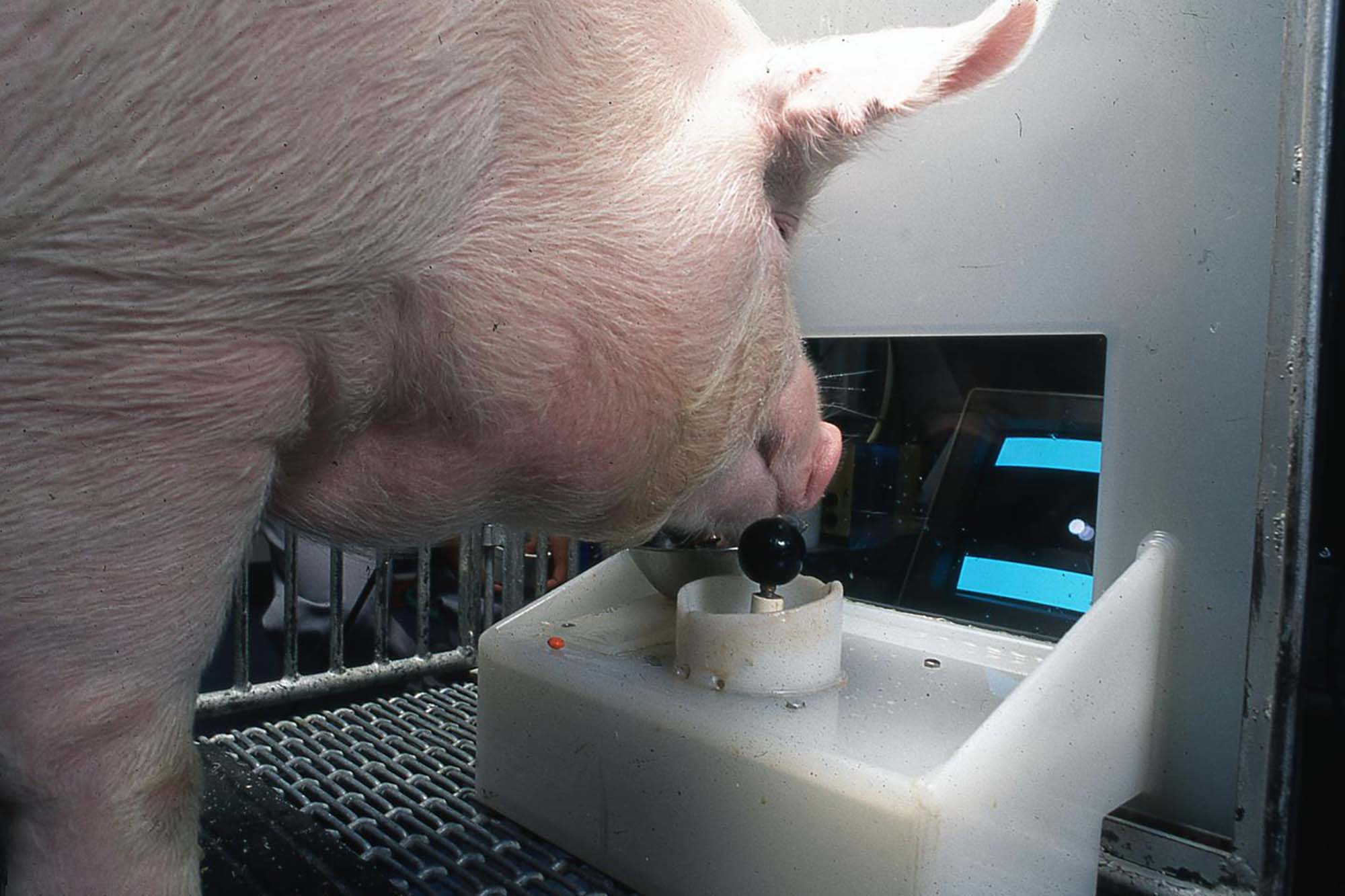 Pigs can’t fly, but they apparently can fiddle with a joystick.

With training, the swine were clearly able to comprehend that manipulation of the joystick controller was connected to the cursor on the monitor. They learned to play a rudimentary video game, despite them having a genetic predisposition for far-sightedness and no opposable thumbs, instead making use of their snouts — “no small feat,” according to the researchers.

“That pigs can do this to any degree should give us pause as to what else they are capable of learning and how such learning may impact them,” the lead author, Candace Croney, Ph.D., said in a statement about the study, published in Frontiers in Psychology on Thursday.

Each level cleared would prompt a reward mechanism, granting the pig a treat for their good work.

Candace Croney, Ph.D., poses with one of the “remarkable” pigs in the study she conducted.Eston Martz / Pennsylvania State University

And, with encouragement from research team members, the hogs continued to play the game and advance levels even after the reward dispenser stopped spitting out food.

Granted, they’re far from pinball wizards: With moderate difficulty settings, Omelette and Hamlet, both Yorkshire pigs, delivered correct responses at rates of 70% and 78%, respectively — deemed “above chance” in terms of probability, indicating that their scores weren’t driven by complete guesses.

On the other hand, Panepinto micro pigs Ebony and Ivory performed somewhat less impressively when tested on the same skill level, with Ebony scoring just 56% and Ivory winning at a rate of 68%.

“This sort of study is important because, as with any sentient being, how we interact with pigs and what we do to them impacts and matters to them,” said Croney, a professor and director of Purdue University’s Center for Animal Welfare Science.

“We therefore have an ethical obligation to understand how pigs acquire information, and what they are capable of learning and remembering, because it ultimately has implications for how they perceive their interactions with us and their environments.”

One goal of the study was bringing awareness to issues of animal cruelty, as well as “informing management practices and improving pig welfare,” Croney said.

But, she added, “that is secondary to [the goal of] better appreciating the uniqueness of pigs outside of any benefit we can derive from them.”

Meanwhile, Elon Musk may have found a way around the pigs’ physical limitations: Just give them a Neuralink implant. Earlier this month, the tech guru claimed that his brain-chip company nestled a wireless device into a monkey’s skull and the simian is already playing video games by “using his mind,” Musk said in a recent interview.

However, his goal appears to be somewhat less noble.

“One of the things we’re trying to figure out is, can we have the monkeys play mind-Pong with each other?” Musk said. “That would be pretty cool.”