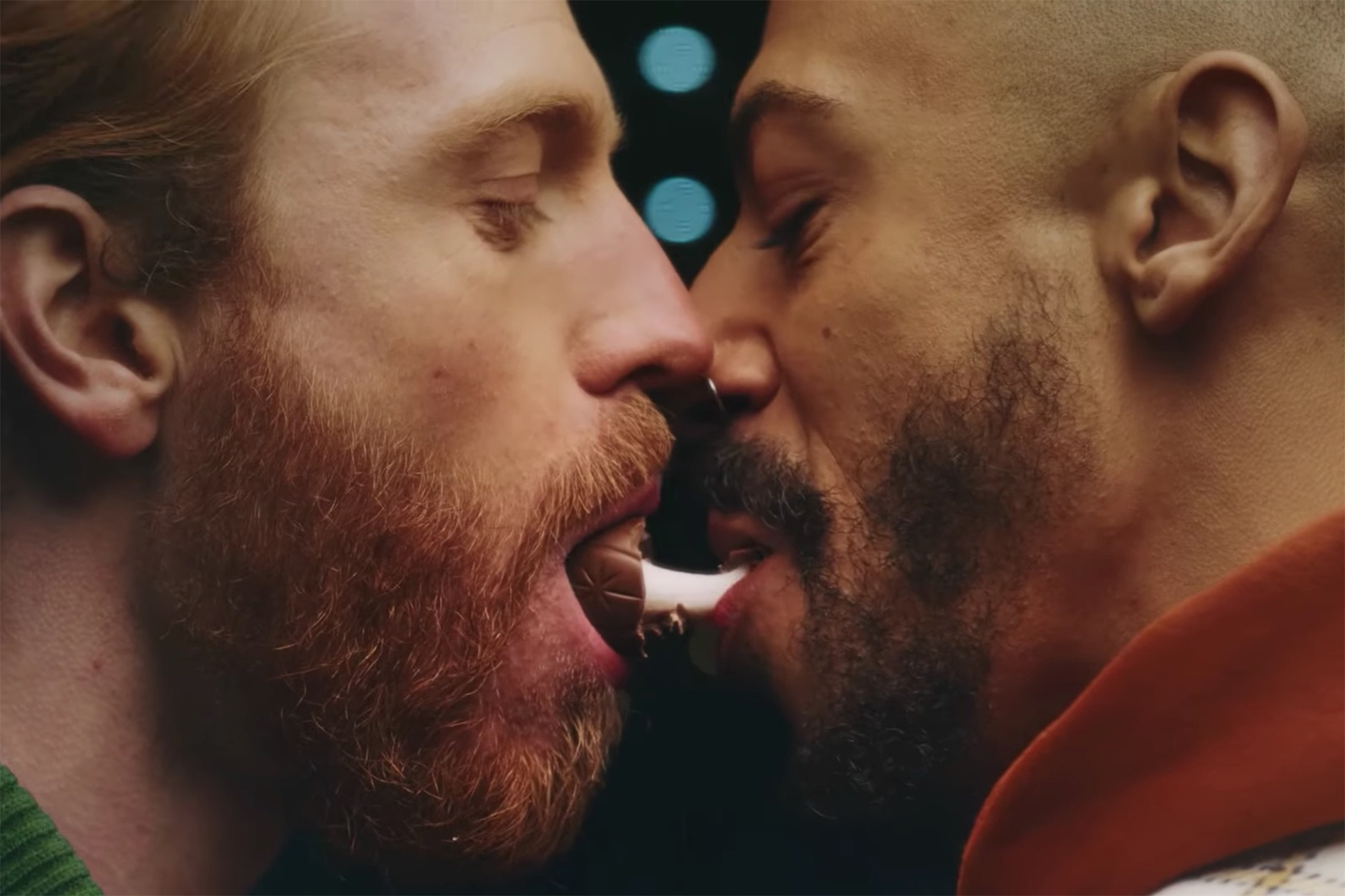 Cadbury is getting creamed by critics on social media, who say the British candy company is “selling sex to children.”

“It’s the Creme Egg Golden Goobilee,” a voiceover proclaims, kicking off a montage of whimsical scenes depicting the many unique ways one can eat a Cadbury Creme Egg.

“Calling all eggshibitionists: Let the eatertainment begin!” the ad’s voiceover annouonces. “Lickers, let loose … Discreaters, come out of your shell,” the voice continues.

But it’s the money shot at the end of the video that has viewers clutching their pearls, depicting two men passing the sweet treat to one another in their lips before bursting the egg and its creamy contents.

The commercial for Cadbury includes two men passing the egg from each others’ lips.Cadbury via Youtube

“Sharers, yea, we are down with that,” the narrator says.

Turns out, at least 26,000 viewers were not down with that, as a recent petition suggests, demanding the commercial be removed from the air.

“By choosing to feature a same-sex couple, Cadbury’s are clearly hoping to cause controversy and escape criticism,” the petitioner alleges, “by claiming that any objections must be rooted in ‘homophobia,’ but members of the LGBT community have also expressed their dislike of this campaign.”

The author goes on to accuse the Cadbury campaign of using sexually explicit content to provoke viewers while “seeking to hide under cover of LGBT rights.”

“Cadbury’s is well aware of the religious significance of Easter. Therefore, they are trying to cause gratuitous offense to members of the Christian community during the most important feast in their calendar.”

They concluded, “Exposing children to sexualized content constitutes a form of grooming. It is well-known that children will often copy what they see on the screen.”

Last month, the Mondelez International, Inc.-owned company issued a defense of the campaign, reported in AdAge.

“Cadbury has always been a progressive brand that spreads a message of inclusion, whether it is through its products or brand campaigns,” the company said in their written statement. “We are proud of our Golden Goobilee advert which celebrates the many ways that everyone can enjoy a Cadbury Creme Egg. To illustrate this and showcase the joy our products bring, a clip of a real life couple sharing a Cadbury Creme Egg was included in the advert.”

Viewers have also since come out in support of the sex-positive commercial.

“People losing their minds over two men kissing over a creme egg but have no problem with a woman cheating on her husband with an M&M?” joked one candy consumer on Twitter.

“I spent my childhood watching a woman in a bathtub fellating a Flake,” another pointed out, in reference to the British brand of chocolate bar made of flake and thinly folded milk chocolate.

Other critics shared the prudish petitioner’s distaste for the ad’s content — but for a very different reason.

“I’m DISGUSTED by this. I would NEVER share a Creme Egg with my husband,” said one man, whose response was ‘liked’ on the social media platform some 5,600 times.

Another popular tweet asserted, “The Cadbury’s creme egg advert with two men kissing is divisive and dangerous, because it promotes the unacceptable idea that you should be expected to share your creme egg with another person.”

Mondelez, who appears to have no plans to shut down the campaign, added an additional statement for anyone concerned about the social-distancing measures — or lack thereof — on the Cadbury’s set: “The actors featured in the film were from the same household, so they were egg-static to share a delicious Cadbury Creme Egg together! We also ensured that social distancing and stringent hygiene measures were taken when shooting the new advert.”