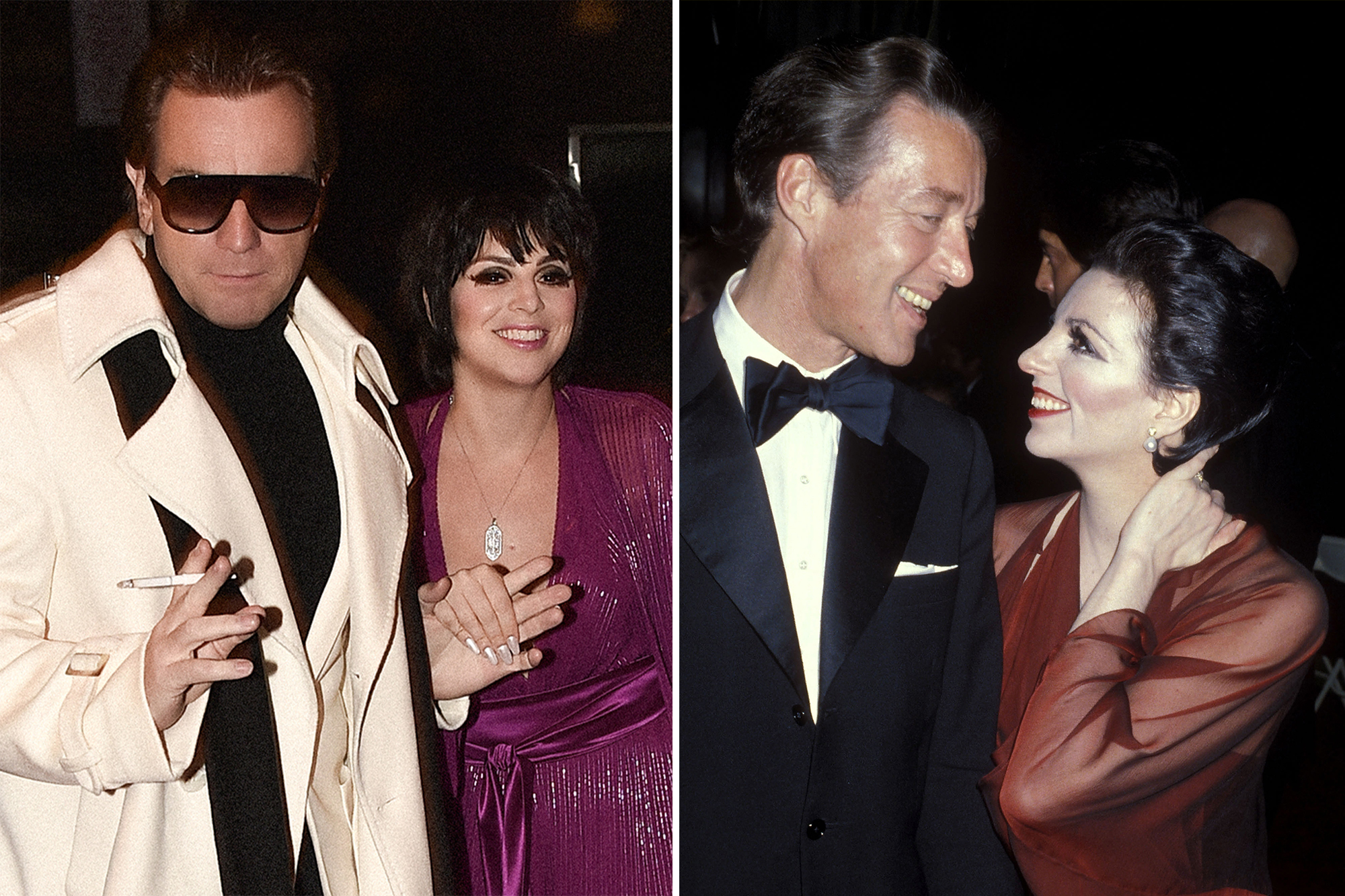 “Halston” — the new five-part Netflix series from “American Horror Story” producer Ryan Murphy — charts the spectacular rise and fall of the disco-era designer, born Roy Halston Frowick. There’s plenty of sex and drugs and fashion, yet the most electrifying sequence in the show (out Friday) comes when Halston (Ewan McGregor) offers to dress his new acquaintance, Liza Minnelli (Krysta Rodriguez).

“Halston and Liza meet each other, and he just starts draping fabric on her body,” Rodriguez told Vogue about the scene. With a few elegant movements, Halston — who hasn’t yet established his own label or even style signature at this point — transforms from society hat maker to creative fashion genius, and Liza from a still-scrappy Broadway singer to bona fide star.

“Ewan went through intense training to figure out how the draping process works, and it resulted in the best dress that I’ve ever seen on my body,” Rodriguez said. “And it just came out of a single bolt of fabric and a couple pins!”

In real life, Minnelli’s godmother, Kay Thompson (author of the “Eloise” books), introduced the Broadway singer to Halston — who was already an established couturier — at his boutique in the early 1970s. But the designer really did coax sinuous, glamorous gowns out of a piece of cloth, like magic. And he really did have an intense creative connection with his friends and muses, particularly with Minnelli.

“Halston understood Liza in a way that nobody else had,” Halston biographer Steven Gaines told The Post. “He benefited greatly from her starlight, but he also just loved Liza.”

It wasn’t just that he was a great fashion designer who could make the unconventional Minnelli look fabulous, Gaines, author of “Simply Halston,” added. “He was also a very clever fellow who loved his friends and could be really supportive and wise.”

On the surface they seemed an unlikely pair. Liza grew up amid Hollywood royalty, the daughter of superstar Judy Garland and director Vincente Minnelli. Halston came from Des Moines, Iowa, where he led a typical Depression-era childhood, playing soapbox derby races, fishing and the like.

Yet their connection was immediate.

“We got along instantly, and he became my fashion mate,” Minnelli told Harper’s Bazaar in 2011. “I did what he said. He really took care of me … Halston told me what to wear every second.”

After their fateful meeting, Minnelli scrapped her silly ‘60s shifts — in the scene where she first meets Halston in the show, she’s wearing a puerile Peter Pan collared dress — for a more sophisticated style: slinky jumpsuits, soft suit jackets and her classic long button-down shirt worn with high heels and black stockings or a skirt slit-up-to-there.

Krysta Rodriguez as Liza and Ewan McGregor as the iconic title character in a scene from “Halston.” ATSUSHI NISHIJIMA/NETFLIX

He dressed her for performances (like the variety show “Liza with a Z”), her events (like the slinky yellow ensemble she wore to the 1973 Oscars, when she won Best Actress for “Cabaret”) and her day to day. They dined and partied together at Halston’s chic modernist townhouse at 101 E. 63rd St. and the notorious nightclub Studio 54.

At the decidedly un-model-like 5-foot-4, Minnelli “was shorter, she had a very short waist — like her mother — she was very voluptuous but had gorgeous legs, so Halston could do something like a sequined bodysuit and she would look phenomenal,” said Patricia Mears, deputy director of the Museum at FIT. “Even tailoring pants for her, he would know how to cut the proportions just so to elongate the body.”

Despite all the glitz and glamour, there was real depth to their relationship. “They were both wounded people,” Gaines told The Post. Both grew up with alcoholic parents. Both were outsiders running away from their pasts (Halston, a gay hat-maker escaping his small-town Midwest roots; Minnelli, trying to emerge from the oppressive shadows of her famous parents). Both became dependent on drugs. Each needed someone who could offer non-judgmental support and understanding. “That’s what they found in each other,” Gaines said.

When Halston had a meltdown before a big show in France — the legendary 1973 “Battle of Versailles” extravaganza that pitted Paris couturiers against American designers — Minnelli ran after him to calm him down and rally his spirits.

“She was the one who sat down with Halston,” model and “Halstonette” Chris Royer later told an interviewer about the event. “She unified everybody.”

Halston would famously later lose his business, his name, his status. He was ousted from his company in 1984, never working in fashion again. Yet, Minnelli never abandoned him, remaining faithful to him after his death of AIDS in 1990 — even today. When a documentary film crew recently asked her about the more unsavory parts of Halston’s life, she refused to spill any secrets.

“It’s very hard to do an interview about your best friend,” she said. “Especially if what’s popular in that day and age is digging a little. I don’t like it. I don’t like it when they did it to my mother or my father or myself. And I won’t do it to Halston. I just won’t.”

Minnelli wasn’t the only unconventional beauty who inspired and hung out with Halston. The designer had an entire coterie of fabulous friends who traveled everywhere with him, always in his original designs.

“The Halstonettes were just a remarkable phenomenon,” said Patricia Mears, deputy director of the Museum at the Fashion Institute of Technology, using the term for Halston’s many muses. “It was a very smart business decision — I mean, what’s better than having a gaggle of glamorous women around you, showing off your greatest designs?”

This diverse gaggle of muses included the Midwest blonde Karen Bjornson, the African model Iman (who made her runway debut at Halston), the statuesque Anjelica Huston, and the larger-than-life Pat Ast. The one thing they had in common, said Halston biographer Gaines, was “attitude.”

And they were more than just walking billboards; they actually inspired and influenced his designs, too.

“There was a lot of direct communication between him and these models, especially in the earlier years,” said Mears. “It was not like working with a client. They were really friends.”

Model muse Pat Cleveland snuggles up to designer Halston (center) as Andy Warhol “superstar” Pat Ast looks on at a packed party on Oct. 19, 1972 at Halston’s Studio in NYC.Ron Galella Collection via Getty

The zaftig, curly-haired Pat Ast worked at a box factory before Halston hired her to work at his Madison Avenue showroom. She quickly became a star seller, charming the ladies who lunch with her brash humor, and she also modeled in his shows — where she peacocked down the catwalk in sparkling caftans and once even jumped out of a cake. She always looked idiosyncratic and great, with her signature fan and wild tresses.

“Halston designs things that are specially made for me,” the 200-pound Ast proudly told a TV reporter as seen in the 2019 Amazon doc “Halston.” “Which is the most incredible thing.”

More than a muse, the tall, slim Elsa Peretti designed the tear-dropped glass bottle for Halston’s perfume, as well as the chunky silver pendants and bangles his models wore. He later helped her get a gig designing trinkets for Tiffany.

“Elsa was different from the other models,” Halston had said. “The others were clothes racks — you’d make them up, fix their hair and then they’d put their blue jeans back on. But Elsa had style: She made the dress she was modeling her own.”

The slender African-American Cleveland traveled everywhere with Halston and his crew, from Studio 54 all the way to China. The former dancer’s grace and elegance seemed to have influenced Halston’s sinuous shapes, which were ideal for the movements of a ballerina.

“He took away the cage and he made things as though you didn’t really need the structure as much as you needed the woman,” Cleveland once said.

“And he lined us girls up — we were all perfectly dressed — and he would go to the first girl and he’d whisper something into their ear. And he’d say, ‘Now don’t forget, you’re the best.’”