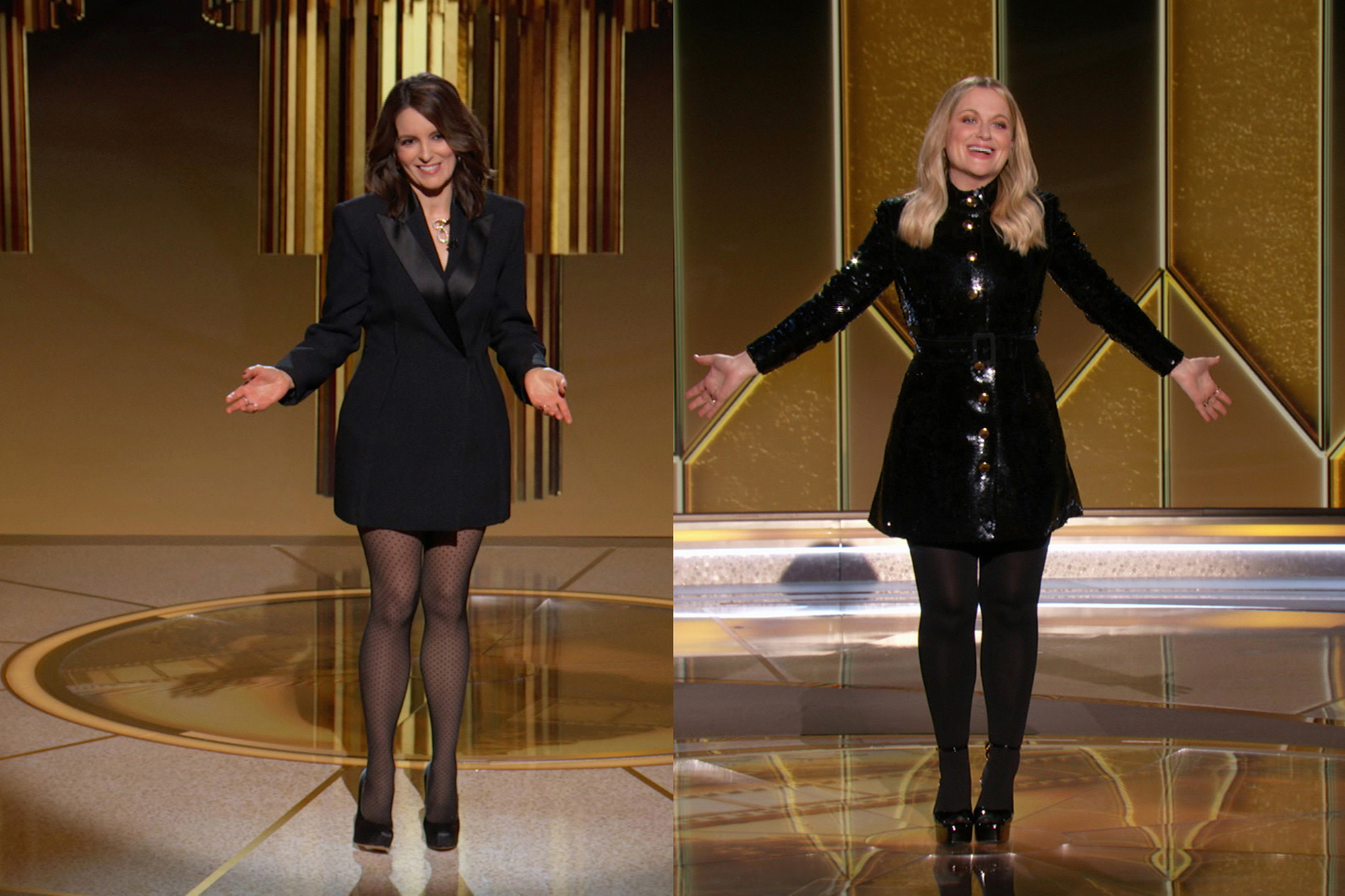 Tina Fey and Amy Poehler did a nice job hosting the first-ever virtually telecast Golden Globes Awards in a huge “consider the circumstances” kind of way.

But, when all was said and done, those technical glitches were few and far between. A lot that could have gone wrong, didn’t. Kudos to the show’s executive producers, who used modern technology cleverly and to the viewers’ advantage almost without skipping a beat.

There were hardly any celebrities at either venue — Fey was at New York’s Rainbow Room in Rockefeller Center, while Poehler hosted from the Beverly Hilton in LA — with first responders comprising the in-studio audiences (a nice touch). The show was much more subdued than usual but, then again, how could it not be? Each year the Globes try too hard to force the “anything-can-happen” vibe (it usually doesn’t); it was a relief to see that forced-gaiety attitude missing Sunday night, thanks to the COVID-era limitations.

And it was no less entertaining.

Fey and Poehler opened the show with a monologue — (sort of) holding hands virtually in a nice use of special effects and getting right to business with a snappy monologue interspersed with shots of celebs at home — including James Corden, Aaron Sorkin and Nicole Kidman, to name a few, and all dressed to the nines. The co-hosts’ different-coast venues actually worked to their advantage, since they were more attentive to cues and only once (slightly) stepped on each other’s lines (when welcoming 98-year-old Norman Lear). They worked together almost as seamlessly as the curtain-backgrounds in both venues.

Fey and Poehler addressed the controversy over the lack of representation among the HFPA members — “90 international (no black) journalists,” as Fey pointed out, “even with stupid things [like the Golden Globes] inclusivity is important” — and gave a shout-out to the “smoking hot first-responders and central workers” in the audience on both coasts, addressing two of this year’s topical issues. Sterling K. Brown also later got into the act: “It’s great to be black … back … at the Golden Globes.” Touché.

For all the criticism leveled at the HFPA, they did get several winners right in their TV picks: Mark Ruffalo for playing wildly different twin brothers in “I Know This Much Is True”; Catherine O’Hara for “Schitt’s Creek” (she thanked series co-creators Dan and Eugene Levy for allowing her to play a character that spoke “like an alien”); Emma Corrin who played Princess Diana on Season 4 of “The Crown”; and Jason Sudeikis for “Ted Lasso,” a terrific series with a heart of gold. Would’ve been nice for Sudeikis to have put on a nice shirt, at least, for the occasion, but that’s a minor quibble.

The “Kids Say the Darndest Things”-type segment was cute (and unprecedented, as far as I know), and a welcome break at the 90-minute mark. Ditto for the first responders segment, with celebs (including Glenn Close, Don Cheadle, Lin-Manuel Miranda and Carey Mulligan) talking with doctors and using symptoms/medications to mentions nominees (“Bridgerton,” “The Crown,” “Minari”).

The virtual wall of Zoomed-in nominees speaking to each other — shown before each commercial break — was refreshing and a fun way to get the stars involved from home (most of whom likely were strangers to each other). The talk sometimes seemed forced (Bob Odenkirk greeting Al Pacino, for instance) but at least it was interesting in that modern-day “The Brady Bunch” opening credits kind of way (this time with sound).

The winners accepting their awards at home also gave the telecast an off-the-cuff feel (example: best supporting actress Jodie Foster mentioning “my friends screaming downstairs” when she won her award for “The Mauritanian” — liked her cute dog, too); winners being hugged by excited family members; and the occasional crying baby.

The Golden Globes offered a Zoomed-in wall of nominees throughout the night.Getty Images

There were some misfires: Maya Rudolph and Kenan Thompson as faux theme-song composers (cringe-worthy) — and yes, Amy Poehler, three hours is much too long for this telecast; Tracy Morgan misreading the movie “Soul” (for Best Original Score); Rosamund Pike’s out-of-left-field Rudy Giuliani reference (with no live audience, it just hung there — unlike Sasha Baron Cohen’s Giuliani barbs); and too many winners being played off with canned music for too much nattering on (that’s you, Gillian Anderson), or, as the self-deprecating Sudeikis said, being “windy.” Those gusts of “thank yous” from some winners were, at times, an unrelenting buzzkill.

Still, Sunday night’s telecast only benefitted from its “first time trying this” status and kept it interesting for its three-hour length. (OK, I looked at my watch twice, but still.) It will go in the books as one of the more memorable awards telecasts in some time.

“The Crown” Golden Globe winner Gillian Anderson had a lot to say during her acceptance speech.NBC/Sipa USA

Oprah Suggests Royal Life Was ‘Unsurvivable’ For Meghan Markle And Prince Harry In Teaser Video For Their Interview!
Matt James Allegedly Has Broken Up With His Bachelor Fiance Already
Comment