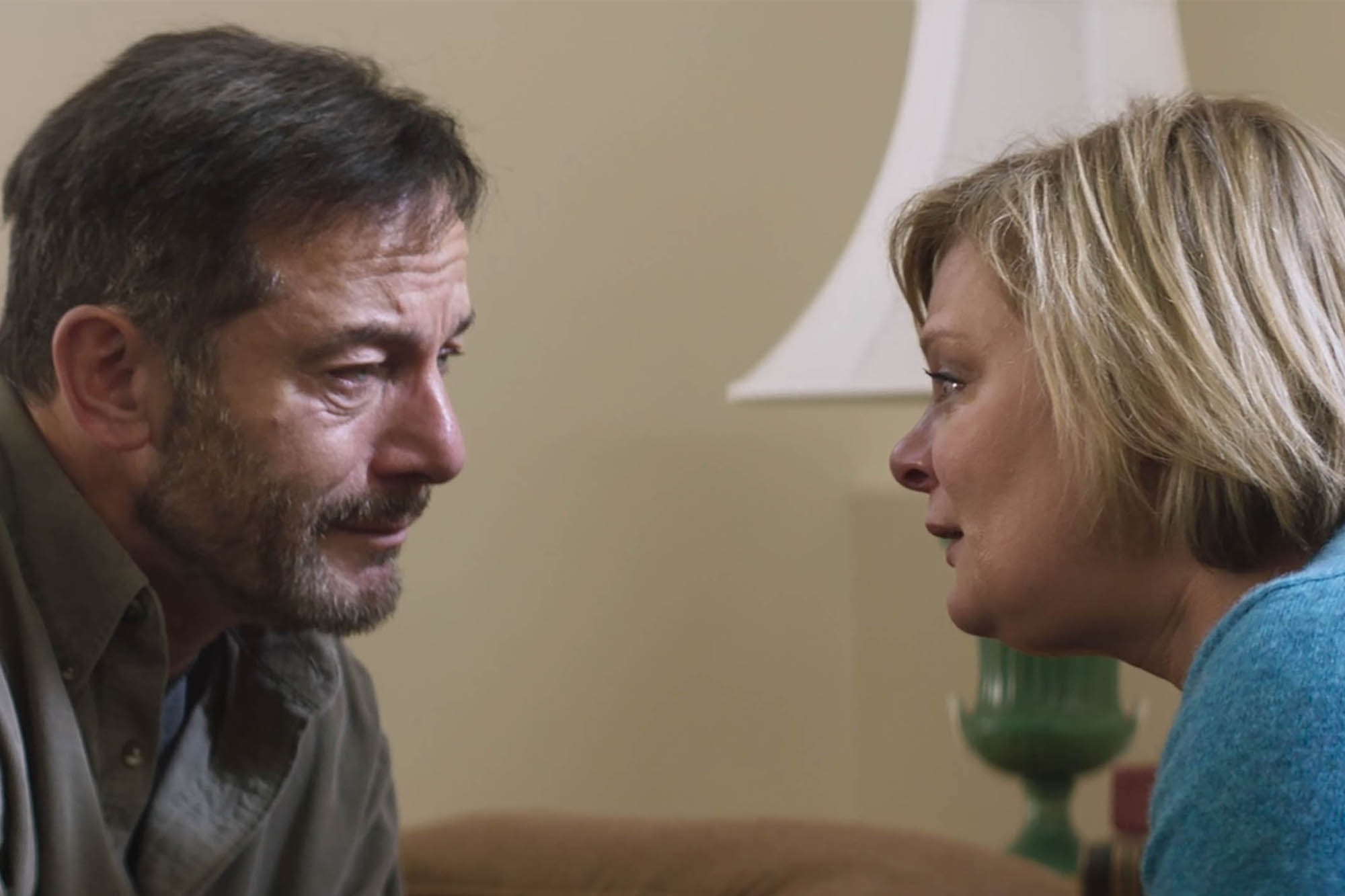 The movie “Mass” starts and ends with the Christian hymn “Blessed Be the Tie That Binds.” It’s a slow, reassuring tune famous for its use in all three acts of “Our Town,” the classic American play about parents and children, why we go on living and what we leave behind when we die.

“Mass,” which premiered Saturday in the Sundance Film Festival, tackles all of those timeless topics, too, and I’d reckon the “Our Town” shoutout is purposeful from writer-director Fran Kranz. But his drama is also haunted by a modern plague the people of Grover’s Corners could scarcely imagine: school shootings.

Kranz’s poignant debut feature, which mostly takes place in one tense room around a folding table, knocks the wind right out of you and then lingers in your mind for hours, if not days.

Several years after 10 local high school students were murdered in a massacre, the mother and father of one victim and the parents of the gunman, who killed himself, meet face-to-face for the first time in a church basement, seeking some kind of closure.

It’s a brave premise, handled sympathetically by Kranz, that allows for a quartet of visceral performances that doesn’t come along every year. Heck, every five years.

The parents of Evan, the victim, are Gail (Martha Plimpton) and Jay (Jason Isaacs). Gail can barely will herself to walk into the building at first, and she is determined to find out how the monster who killed her son was created. Were there early warning signs? Could it have been stopped?

Fran Kranz, the director of “Mass.”Courtesy of Sundance Institute | photo by The Riker Brothers

Hayden’s mom Linda (Ann Dowd) and dad Richard (Reed Birney) not only lost their child on that awful day, but have been blamed over the years by many of the families of the students he killed. A lawsuit was filed against them. Could they have done more? Were they good parents? And the most heart-wrenching: Are they allowed to fondly remember their boy?

You see, Kranz has not attempted to coldly psychoanalyze a killer — Hollywood’s favorite thing to do — but instead suggests what the healing process might look like after living through a nightmare.

The first remark to really shake us up comes as the couples are sharing old photos, which their therapists have suggested. Gail hands one to Linda and says, “That’s the last Christmas.” Silence.

Later on, while talking about the unfathomable challenge of being the parents of a loathed murderer, Linda painfully confides, “The world mourned 10. We mourned 11.”

There are many such striking moments. Plimpton and Dowd’s relationship unpredictably switches over and over again, from professional to combative to conciliatory and back. Dowd, with a monk-like calmness suggesting years of self-reflection, is the adult in the room — until an unforgettable moment late in the film when everything changes. Plimpton begins as a fortress who’s unwilling to hear anything she doesn’t like, and gradually comes to realize she’s sitting across from two other humans who also lost a kid.

Neither actress is playing a British queen, or is smothered by prosthetics in a weighty epic — and I know it’s only January — but these women have given two of the best performances you’ll see all year.

Isaacs and Birney (who film audiences won’t recognize, but is a brilliant stage actor who wowed Broadway with “The Humans”) have more restrained roles. Their characters clearly feel they need to stay strong for their wives, not to mention their own masculine pride, so their occasional cracks are affecting.

Viewers, I’m sure, will be hesitant to watch “Mass” when it’s widely released. It confronts one of the ugliest stains on American life that frightens us on the news all too regularly and that we pray never happens again. But, more importantly, the film beautifully expresses humanity’s best aspects — our capacity to forgive and connect with the most unlikely of people.

As Emily says in “Our Town,” “Let’s look at one another.”

Wendy Williams Shares How She Took Revenge On Ex-Husband Kevin Hunter And His Mistress!
50 Cent Continues His Troll-A-Thon Of Method Man After Wendy Williams Claims They Hooked Up Many Years Ago
Comment