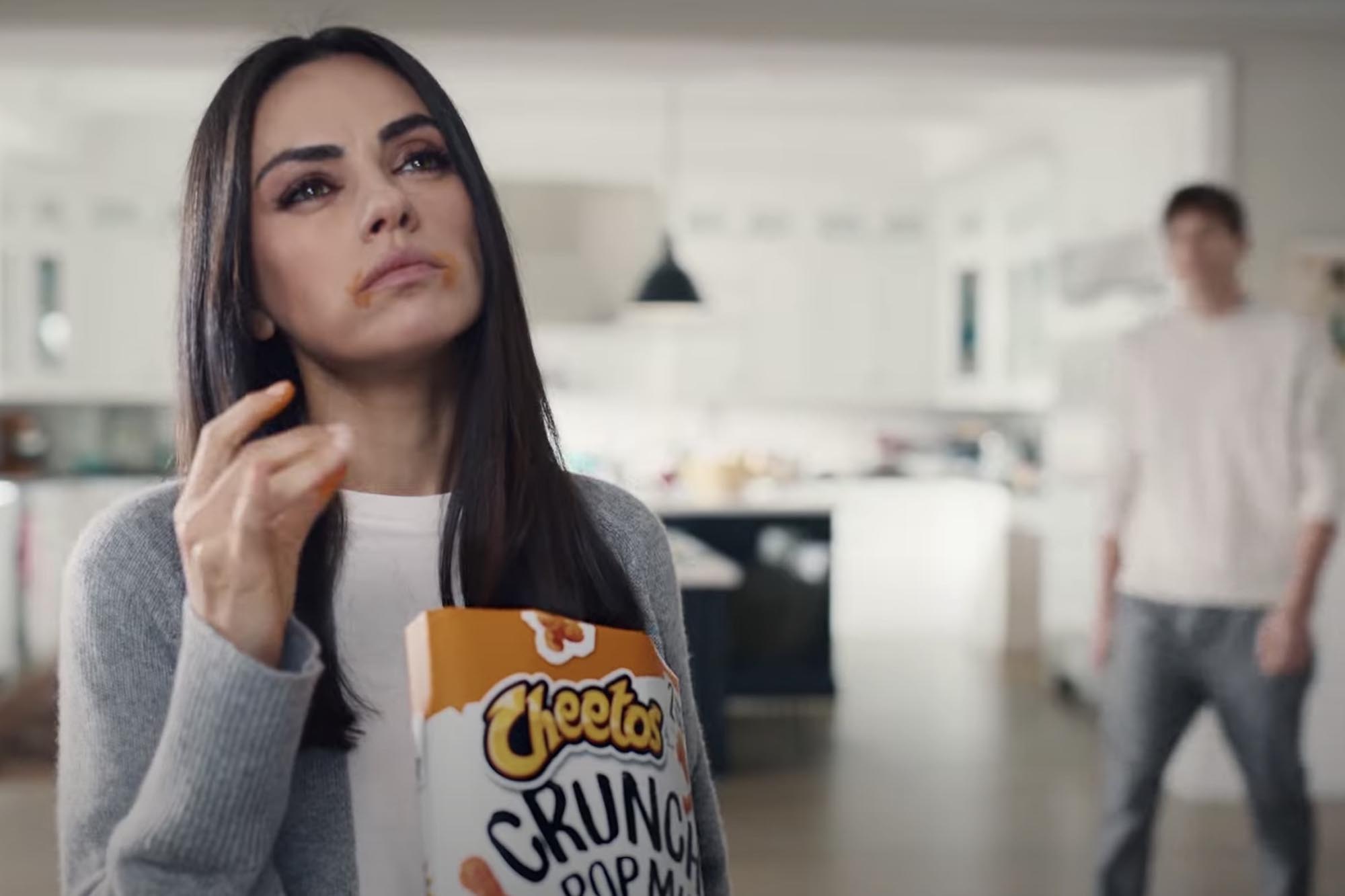 This is so darn cheesy.

Ashton Kutcher catches wife Mila Kunis doing it on the counter, on the sofa, in the shower and even on camera.

You guessed it, she was Cheetos-ing on her husband.

Kunis, 37, cheats Kutcher, 42, out of his Cheetos Crunch Pop Mix in a cheeky ad set to air at the Super Bowl. The hilariously cheesy commercial is one of three from the Frito-Lay brand and the real-life married duo, all hitting airwaves during the matchup between the Tampa Bay Buccaneers and the Kansas City Chiefs on Sunday.

In a spoof re-enactment of dance-hall dynamo Shaggy’s 2000 cheater anthem, “It Wasn’t Me,” the “That ’70s Show” co-stars-turned-sweethearts play a game of cat and mouse over Kutcher’s missing bag of Cheetos.

“It’s so silly!” Kunis told “Entertainment Tonight” of the cheese-powdered promo. “Ashton and I, we never work together. I mean, I know we’ve worked together before [on ‘That ’70s Show’ and more], but in the midst of quarantine, they sent us this ad to do.”

Mila Kunis said working on the commercial gave her and husband Ashton Kutcher a much-needed break from their kids.Cheetos

Even with orange dust caked around Kunis’ mouth and on her fingertips, the Hollywood hottie and mom of two said filming the ad gave her and Kutcher a much-needed timeout from full-time parenting during the COVID-19 pandemic.

“Also it was quarantine, and we were stuck with our children for nine, 12, months at this moment, and I was like, ‘Two days, baby! Two days off,’” Kunis said of their mini work vacation from daughter Wyatt, 6, and son Dimitri, 4.

“I love my children so very much. So, so much,” she added. “But I’ve never been so excited to wake up at 5 in the morning to be like, ‘I’m going to work!’ I literally skipped out of the house. My kids were like, ‘You’re abandoning us!’ And I was like, ‘Relax.’”

The hilarious commercial was released ahead of this Sunday’s Super Bowl.Cheetos

The “Family Guy” actress — who voices humdrum Meg Griffin on the animated Fox series — also voiced her cheer that the Cheetos spot didn’t call for her to be overtly sexy for football fans.

“Every time I’ve ever been offered a Super Bowl ad, it’s always a female having to be scantily clad,” said Kunis. “But this one comes around, I started laughing so hard, and Ashton was like, ‘This is kind of funny.’ And I was like, ‘We should do it!’”

Jennifer Coolidge once pretended to be twins to date two men
Karl-Anthony Towns Reportedly Already Sure He Wants To Marry Jordyn Woods!
Comment