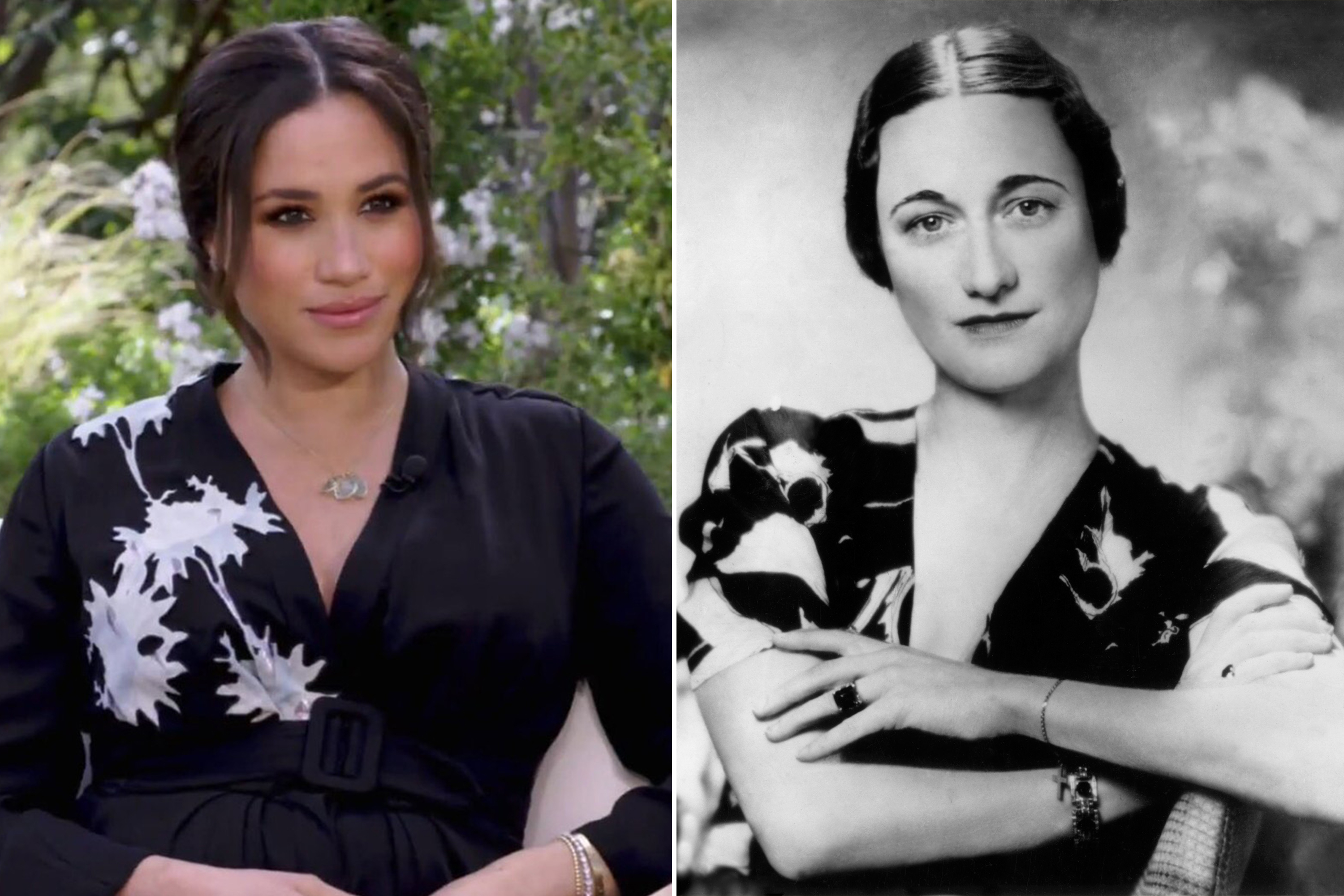 Meghan Markle’s chic look for her upcoming interview with Oprah Winfrey is being compared to an iconic portrait of fellow American Duchess Wallis Simpson on social media.

For the highly anticipated tell-all, set to air on CBS March 7, the 39-year-old Duchess of Sussex donned a $4,700 black Armani dress featuring a white abstract floral print, along with her signature messy bun.

It didn’t take long for Twitter to notice the striking similarities between Markle’s outfit and one worn by Simpson — for whom Prince Harry’s great-uncle King Edward VIII abdicated the throne to marry — in a 1936 portrait, before she became the Duchess of Windsor.

In the photo, Simpson also sports a center-parted chignon and a black silk dress with a V-neckline and white floral print — albeit one that appears all over the frock instead of just on one side.

What’s more, Markle layered Princess Diana’s diamond bracelet with her beloved Cartier Love bracelet ($6,550) for the sit-down, an iconic style that was also owned by the Duke and Duchess of Windsor.

“Idk does no one else feel the serious Wallis Simpson vibe coming off Meghan in that trailer,” one person tweeted, while another wrote, “Megs looks as if she’s styled herself for this interview on someone she can relate to.”

It’s far from the first time Markle has been compared to Simpson. Their stories began in much the same way: “A popular, playful prince falls in love with a strong-willed US divorcée, who ends up vilified by a hostile British press,” as the BBC noted in 2020.

Both women were slammed as social climbers and master manipulators by certain members of the media, and fled the UK with their husbands as a result — the Sussexes to Canada and then California, the Windsors to the Bahamas before spending time in both Europe and the US.

Prince Harry and Meghan Markle speak during an interview with Oprah Winfrey.ZUMAPRESS.com

Both couples also enjoyed a connection to Hollywood. But as Olivette Otele, Britain’s first female black history professor at the University of Bristol, pointed out to the outlet, Markle has worked as an actress, activist and lifestyle blogger, while Simpson never held a job.

“One was a socialite, and the other is an independent, successful woman who has relied on her own income to make a living,” Professor Otele explained, saying that the “the veiled and overt racist attacks” against Markle, who is biracial, make comparisons between the pair “completely nonsensical.”

“Wallis Simpson, of course she was mistreated by the British press, but it was never to the same extent [as Markle],” she said.

It’s been teased that the Duchess of Sussex described her time in the royal family — from which she and Prince Harry, 36, resigned completely in February — as “almost unsurvivable” during her chat with Winfrey.