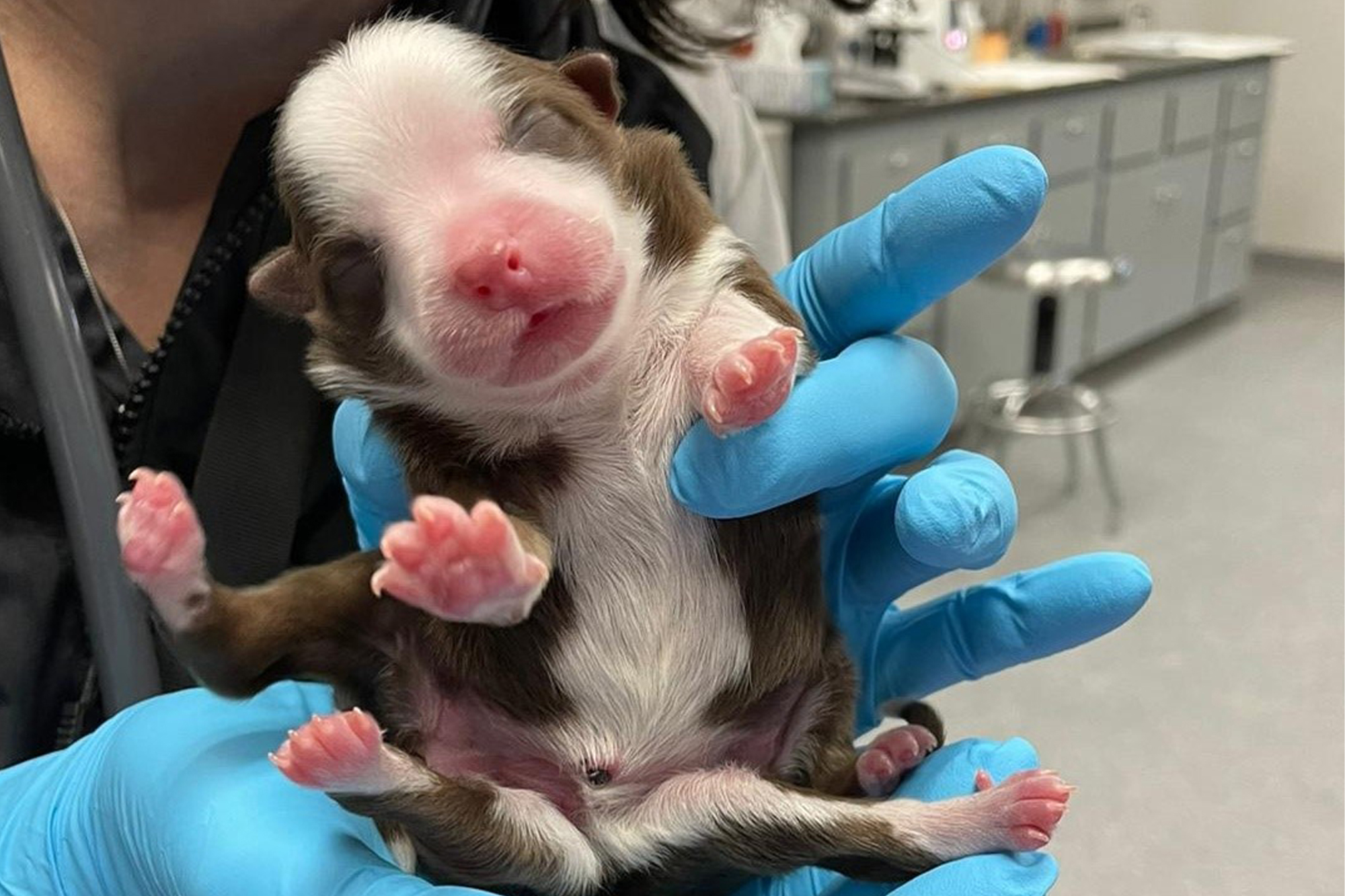 What has six legs, two tails, and an adorable spotted coat?

It’s Skipper, an Aussie border collie mix born last week at Neel Veterinary Hospital in Oklahoma City, where vets are calling her a “miracle” because she’s believed to be the first pup to survive in utero with six legs.

“This is a miracle named Skipper. Literally,” vets announced in a Facebook post. “She has survived longer than we suspect any other canine has (at just 4 days old — published research does not indicate one has been born alive) with her combination of congenital conditions.”

“[It] simply means she has 1 head and chest cavity but 2 pelvic regions, 2 lower urinary tracts, 2 reproductive systems, 2 tails and 6 legs among other things,” vets wrote in the post, which is accompanied by a snap of the cute, if unique pup. “Research does not indicate one has been born alive,” meaning Skipper is the first canine of her kind to survive to birth.

The pup “has been rejected by her mother and is being bottle fed,” a GoFundMe launched by Skipper’s new owner states. The crowd-sourced funds — $1,700 has been raised as of Tuesday morning — will be used toward “vet visits and possibly future surgery to fix some issues if they arise,” although Neel vets said encouragingly that Skipper was “pain-free” and “very strong.”

Skipper is believed to be the first six-legged puppy to survive utero. Facebook

Docs suspect that Skipper’s condition is a result of two embryos in utero failing to separate, but she isn’t a conjoined twin. Skipper has one head and chest — but her nether regions are double: a pair of urinary tracts, two reproductive systems and two pelvic regions, plus her visible bonus appendages are a result of the birth defect. Luckily, all of Skipper’s six legs work, “All of her legs move and respond to stimulus,” and she is “doing well at home now.” Skipper also has spina bifida.

Her new humans are also chronicling “Skipper’s Journey” in a Facebook group, which already has more than 20,000 followers.

Skipper joins another special dog, a 7-year-old Applehead chihuahua named Malibu who suffers from epilepsy, in her new home. “We want her to motivate and mentor Skipper,” her new humans posted.

Jordyn Woods Flaunts Her Natural Hair Are Her Fans Are Impressed
KUWTK: Kim Kardashian – Nicholas Braun Shoots His Shot With A Hilarious Video After She Files For Divorce From Kanye West!
Comment