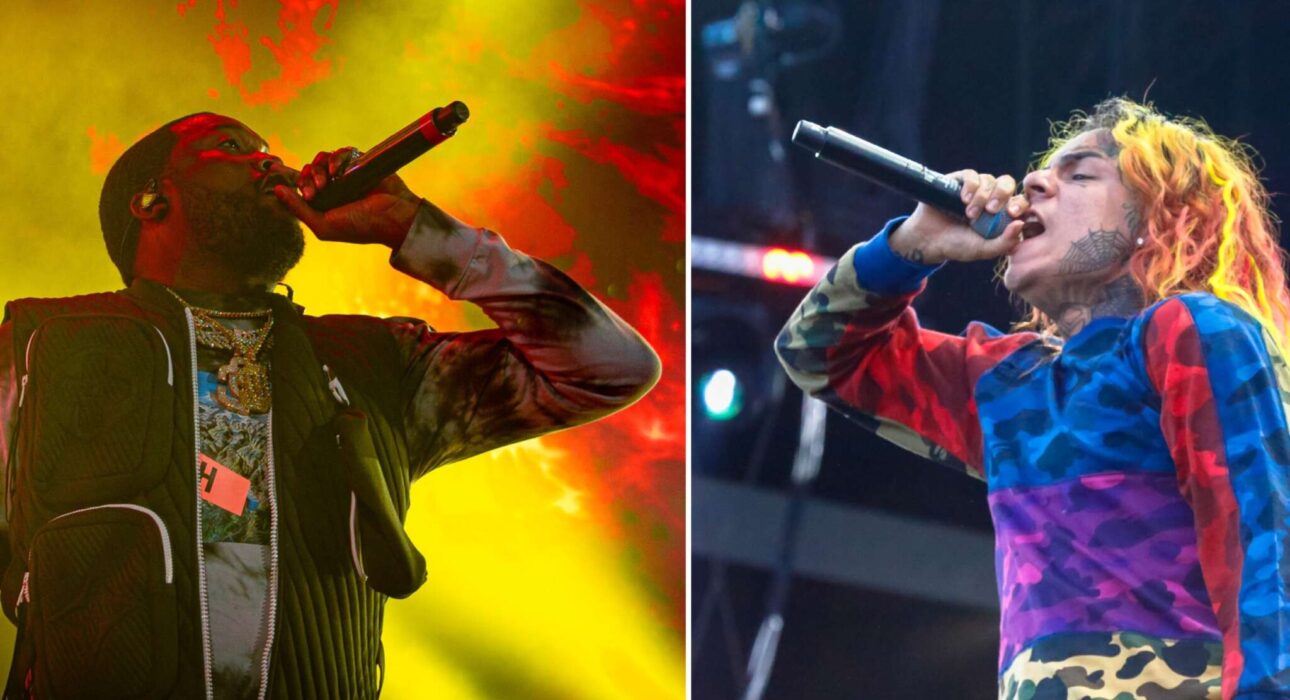 Meek Mill and Tekashi 6ix9ine almost came to blows this weekend, a new report from Hot New Hip Hop revealed. As fans of the hip-hop artist know, Tekashi 6ix9ine bowed out of the limelight after he got out of prison and released a number of hit tracks.
Tekashi released Tattle Tales at the height of his so-called trollery, but it didn’t perform as well on the charts as he or his team had hoped, even though it still did quite well. Initially, Tekashi 6ix9ine and his team hoped it would get 150,000 units in one week, but it wound up shipping only 50,000 approximately.
RELATED: Meek Mill Hits On Rihanna As She Poses In Racy Lingerie – Check Out His Juicy Message
Tekashi was beaten badly by Big Sean and his record, Detroit 2, which featured hit tracks like “Deep Reverence” featuring Nipsey Hussle who was shot and killed outside of his LA Marathon clothing store in March of 2018.
6ix9ine has fought with a number of prolific rappers since he got out of jail, including Snoop Dogg, Meek Mill, and Lil’ Durk, but it was the feud with Meek that nearly intensified to the point of real violence this weekend.
Reportedly, Meek Mill and Tekashi 6ix9ine actually wound up at the same club this weekend and it was filmed and put online in a clip that has now gone viral in the hip-hop world. They got into a shouting match and Meek later addressed it on his Twitter.
RELATED: Kevin Hart Fires Back At Meek Mill After Body-Shaming Him
You can check out Meek Mill’s comments below, or at least one of them:

Later, Tekashi 6ix9ine wrote on his account that rappers are lying to the public about who they really are. Mr. Daniel Hernandez – who goes by his stage name Tekashi 6ix9ine – went on to say in his post that Meek was actually working with the police and not his own private security team.
Meek Mill also said on his Twitter account that Tekashi 6ix9ine said a Pooh Shiesty line to him, which, of course, comes just a few days after Mr. Shiesty denounced Tekashi 6ix9ine for working with the federal government to secure his own early release.
Hip-hop fans know it’s the deal Hernandez cut with the federal government that led to his ostracization in the community, although, his feuds with other rappers afterward didn’t help.
Advertisement