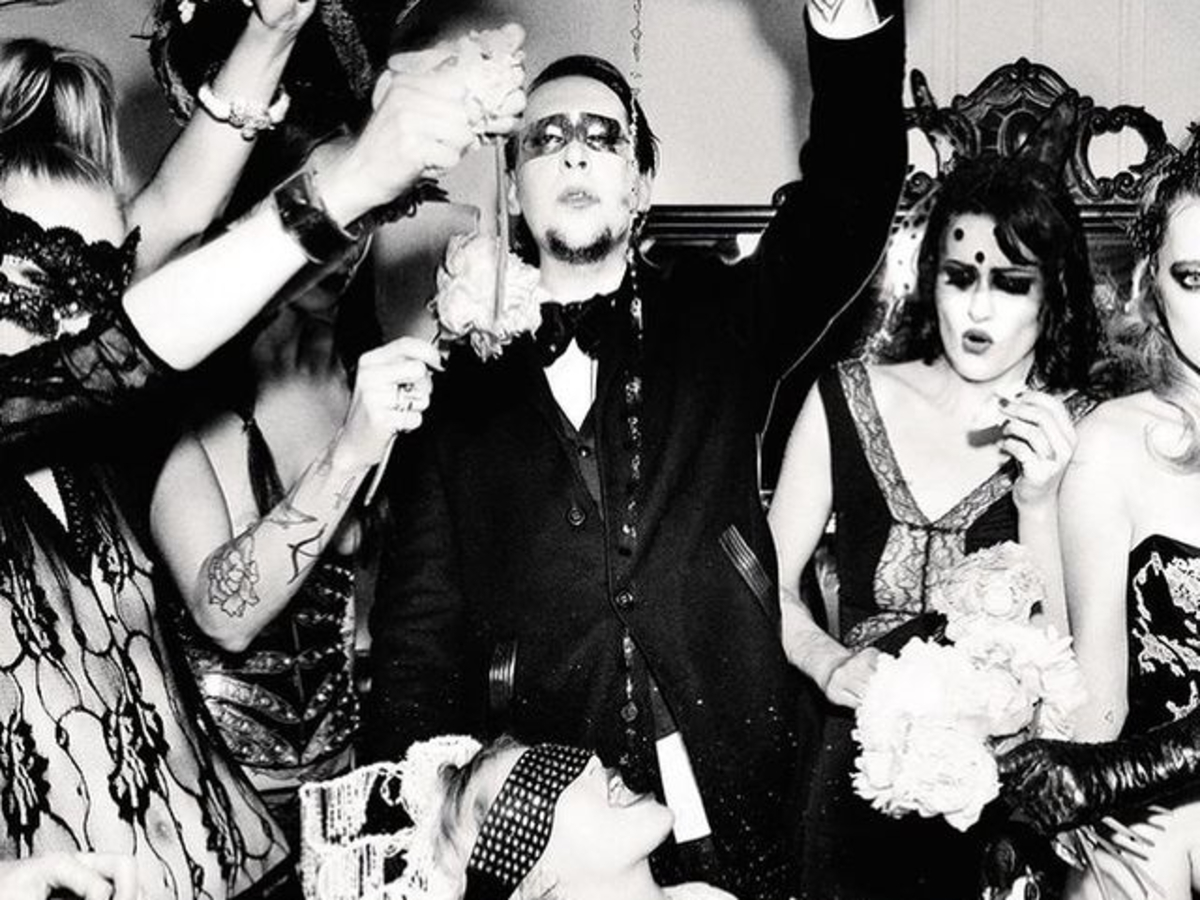 When Love Bailey was a twenty-year-old stylist, she described herself as naive. Thrilled at the opportunity to work with Marilyn Manson for Lovecat Magazine, the experience would later haunt her for years. On February 1, 2021, when Evan Rachel Wood, Sarah McNeilly, Ashley Walters, Ashley Lindsay Morgan, and an artist known only by Gabriella shared their abuse allegations against Marilyn Manson on Instagram, Love Bailey spoke out as well.
RELATED: Marilyn Manson’s Cover Of ‘Lost Boys’ Theme Song ‘Cry Little Sister’ Gets Over 1 Million Views, In Billboard Charts
Sharing a video on her official Instagram account, Love Bailey discussed her encounter with Manson when she entered his home for the assignment. She alleges that Marilyn Manson held a gun to her head after she tried to help a woman who appeared incapacitated and unable to walk. She also spoke of Marilyn Manson’s demonic art, what appeared to be an occult-ritual type portal drawn on the floor, and a glass cage that she believed was used to hold women against their will.
Love Bailey thanked everyone for their support and offering their condolences for her horrible experience. She began the video by calling it a dark time and revealed that she’s received multiple death threats since speaking out. She thanked her supporters for giving her the strength to ‘stand in her truth’ and tell her story.
In addition to receiving multiple death threats, Love Bailey says that the photographer who was involved in the shoot is threatening her. Due to these alleged intimidation tactics, she is speaking out publicly to protect herself and ensure her story is told.
RELATED: Marilyn Manson Covers The Doors ‘The End’ With Original Artwork And It’s Amazing — Watch Video Now
As a stylist, she was doing a photoshoot for an actress whose name was redacted for the video. The photoshoot took place inside Marilyn Manson’s home and according to Love, she was allowed to enter Manson’s personal bedroom.
Love Bailey said she distinctly remembers three rooms in Marilyn Manson’s home: the recording studio, the living room (where her team set up their base for the photoshoot), and the bedroom that was located in his recording studio.
Love said his recording studio was plastered in photos of women from magazines such as Hustler and there were ‘dark paintings’ on the floor. She described the artwork as demonic and said they looked like they were scribbled aggressively in charcoal.
She said the artwork culminated on the floor and then she noticed what appeared to be a charcoal-drawn, occult-type portal. Love assumed he was trying to channel demonic entities through some type of ritualistic ceremony.
Upon entering Marilyn Manson’s boudoir, Love noticed the large, glass cage that she believed was used to hold women against their will. The cage was addressed in the December 13, 2011, issue of V Magazine where the interviewer Elliott David reported the following.

Marilyn Manson lives on top of a liquor store in Hollywood. It used to belong to the actor Billy Zane, and Manson first visited his future home when he’d just arrived in L.A. and was trying to make it as a musician. Now it’s his perfect lair: a recording studio, a bedroom with a “bad girls room” (some former shower or steam room that’s now a lockable, soundproof glass enclosure), and an enormous and black-out space that serves as a movie theater, bar, art studio, and den for congregation.

You may see the full article below.

Love Bailey then stated when the actress stumbled on the floor apparently intoxicated or possibly on drugs, Love tried to help her up. She says Marilyn Manson laughed at the woman on the floor, pulled out a Glock and put it up against Love’s forehead, and mockingly stated, “I don’t like faggots!”
Love was shocked and terrified. She began crying as she recalled the incident, and said that at the moment the gun was at her forehead, she felt completely powerless.
Marilyn Manson hasn’t addressed Love Bailey’s accusations or issued a response.
You may see Love Bailey’s full video where she discusses the incident and that allegedly occurred during her first meeting with Marilyn Manson below.

What do you think about the abuse allegations against Marilyn Manson? Do you side with Manson or the women who have spoken out against him?
Do you support Love Bailey for telling her story?