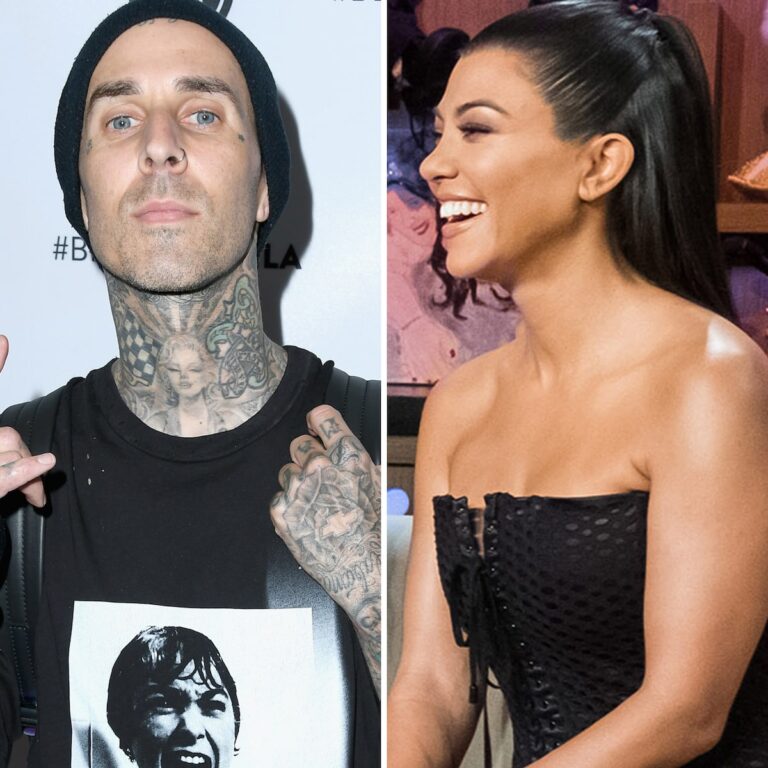 According to some new sources, Kourtney Kardashian and Travis Barker‘s romance is ‘heating up.’ Apparently, the KUWTK star reportedly likes her new man a lot!
That’s right! The source told HollywoodLife that Kourt and Travis’ romance is going really well, although they are still keeping everything private.
RELATED: Models Kendall Jenner And Hailey Baldwin Double Date With NBA Players Blake Griffin and Chandler Parsons
‘Things are moving along nicely for Travis and Kourtney,’ one insider noted. ‘Things are definitely heating up between Travis and Kourtney but there is no rush. They are getting to know each other on a more romantic and exclusive level which has not happened before.’
Sure enough, fans know that the two have been friends for a long time before they crossed that line and started dating.
As it turns out, that foundation has done a lot for their romance as they were already really comfortable around each other and knew one another really well.
RELATED: Khloe Kardashian Beats Kim And Becomes The New ‘Hot One’ In The Family – Kanye West’s Wife Plotting Her Response
‘Travis and Kourtney have hung in the same circles for as long as they can remember, and Travis has known her family as far back as when he was married to Shanna [Moakler]. Kourtney and Travis’ kids also get along great and they even exchanged Christmas presents over the holidays. Kourtney never imagined that things would turn into a romance, but Travis pursued her and how could she turn him down? He is an amazing father to his kids, he constantly makes her laugh, treats her amazing, and they were friends already so she is seeing where it goes but she likes him a lot,’ a second insider told the site about their dynamic.
It sounds like things are going really well for the new couple for now.
As for Kourtney’s ex and father of her children, Scott Disick, the source mentioned that he is rather comfortable having Travis around the young ones since he’s been part of their lives for a long time already.
Advertisement