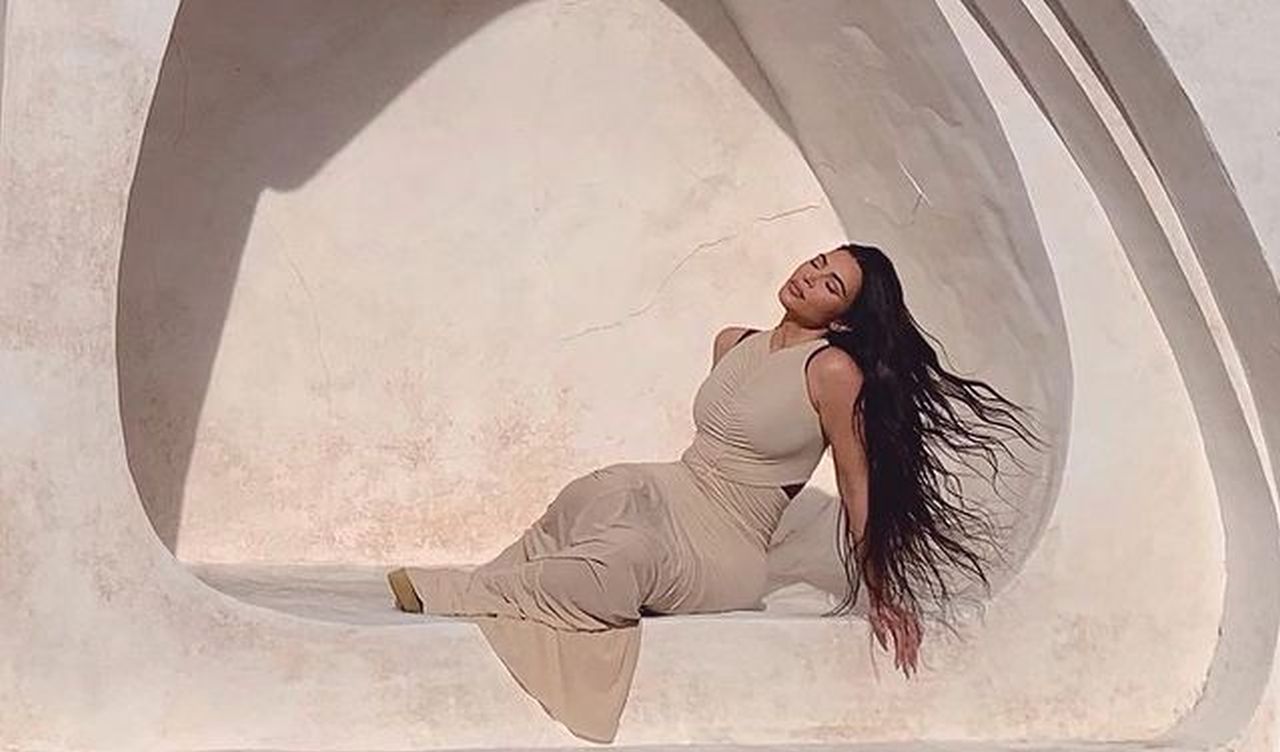 Kim Kardashian continues to prove to Kanye West what he’s missing as she showed off her goddess vibes in new Instagram photos. The 40-year-old mother of four wore a neutral-colored, ruched dress from Rick Owens, marking the second time in recent days she wore the designer. Kim went viral for wearing a white, string bikini paired with a Rick Owens wrap-around cropped top. Now she’s wearing the Rick Owens Lillies Fishtail Ruched Gown and fans are going crazy over the look.
Kim doesn’t seem to be too upset about her divorce as she’s looking radiant in her latest photos. She’s also busy with work and has launched several new items through her Skims and KKW Beauty companies. Fans loved the new photos and the dress Kim is wearing sold out quickly on multiple online sites.
RELATED: North West Looks Like an Adorable Kim Mini-me in Costa Rica Snaps
Rick Owens is revered for his creativity and feminine styles. The gown tends to cost approximately $1500 but can vary in price depending upon the seller.
Kim posed while seated in what appeared to be an outdoor structure made of cement or stone and she credited Amanda Scheer Demme with the photoshoot.
The neutral tones in the dress were the perfect complement to the stone structure and Kim looked sensational in the photos that you may see below.
RELATED: Kanye West Is Against The Idea Of Kim Kardashian Getting Booty Reduction Surgery: ‘He’s Anti-Surgery & Loves Her Big Booty’

Though you can’t see the back of the dress in Kim’s photos, the gown features a back cut-out design. The neck is split, and it hugs the figure tightly. Kim showed off her hourglass figure in the dress and fans couldn’t stop singing her praises in the outfit.
Khloe Kardashian told her older sister how stunning she looked and Sophia Hutchins described the pictures as cool. Fans left remarks such as ‘beautiful,’ and ‘gorgeous.’ Other fans filled up her comment section with hearts, fire emojis, and starry eyes.
What do you think about Kim Kardashian’s latest photos? Do you like the Rick Owens dress on her?
Charisse Van Horn is a freelance writer from Tampa Bay. She enjoys writing about celebrities, entertainment, crime, and fashion. The writer of this article will take legal action on those who reproduce or spin this article outside of Celebrity Insider.
Advertisement

All about Hannah Berner’s engagement ring from Des Bishop
KUWTK: Kendall Jenner And Devin Booker – Here’s Why Their Relationship Is Reportedly Getting More Serious!
Comment