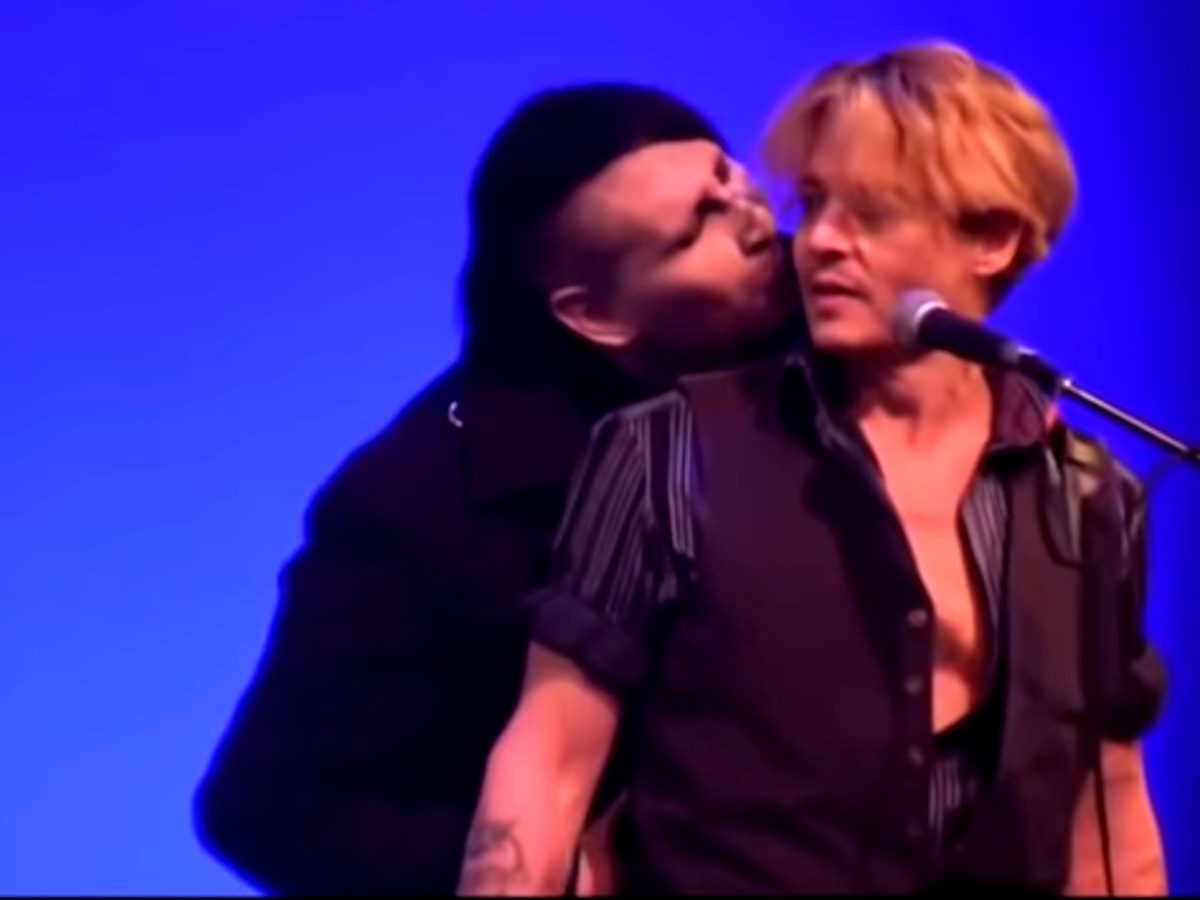 Johnny Depp and Marilyn Manson have a friendship that goes back decades. Manson is godfather to Depp’s daughter Lily-Rose and the two have matching tattoos. They share a lot together and Depp has appeared in Manson’s videos such as “Say10” and “Kill4Me.” Now they are sharing public allegations of abusing their exes as Johnny Depp is embroiled in a legal case with his ex-wife Amber Heard and Manson’s ex-girlfriend Evan Rachel Wood has publicly named him as the man who raped, terrorized, and tortured her. Now, some are sounding off on social media blaming Johnny Depp’s trouble on Manson and saying that his bromance with the shock rocker ultimately ruined his life and career.
Marilyn Manson has always had a dark, macabre persona and some of the statements he has made to the public are beyond disturbing. When asked during a 2009 interview with Spin magazine what the lowest part of his life was following his breakup with Evan Rachel Wood, he explained that on Christmas day, he called her over 150 times and cut himself as a way for her to permanently know how much pain she caused him.
RELATED: Is The Courtroom Sketch Of Johnny Depp Really From The Trial?
Evan referred to Marilyn Manson‘s behavior during testimony before Congress and said that he would manipulate her by saying he was suicidal if she left him. Once when she returned to try and diffuse the situation, she alleges he bound her feet and wrists and tortured her.
Johnny Depp, on the other hand, had an All-American, good boy image and people were stunned and shocked when Amber Heard made her allegations against the actor turned rocker and some think that Marilyn Manson has been a negative influence on Johnny Depp over the years.
Marilyn Manson and Johnny Depp are extremely comfortable with each other and have been photographed and videotaped kissing on stage. Marilyn has stated that they are like brothers and have several matching tattoos. You may see a video of Marilyn giving Johnny a kiss on stage below.
RELATED: J.K. Rowling Defends Johnny Depp, Explains Why He’s Reprising His Role In The ‘Fantastic Beasts’ Sequel Despite His Domestic Abuse Scandal!

Amber Heard revealed during court testimony that Johnny Depp and Marilyn Manson went on a 24-hour alcohol and drug binge together after he dropped his daughter off for school. You may see that report below.

They liked to get real fucked up together. D*pp has a history of anger issues but the ex-lovers who defended him weren’t lying, I don’t think. It does seem to have escalated here. https://t.co/o9KBzrLpQd
— 💀Cromortuary💀 (@CromartyHeather) February 1, 2021

Here is another video of Johnny Depp and Marilyn Manson putting their bromance on full display.

What do you think about the abuse allegations against Marilyn Manson and Johnny Depp? Do you think Marilyn has been a negative influence on Johnny?
Advertisement