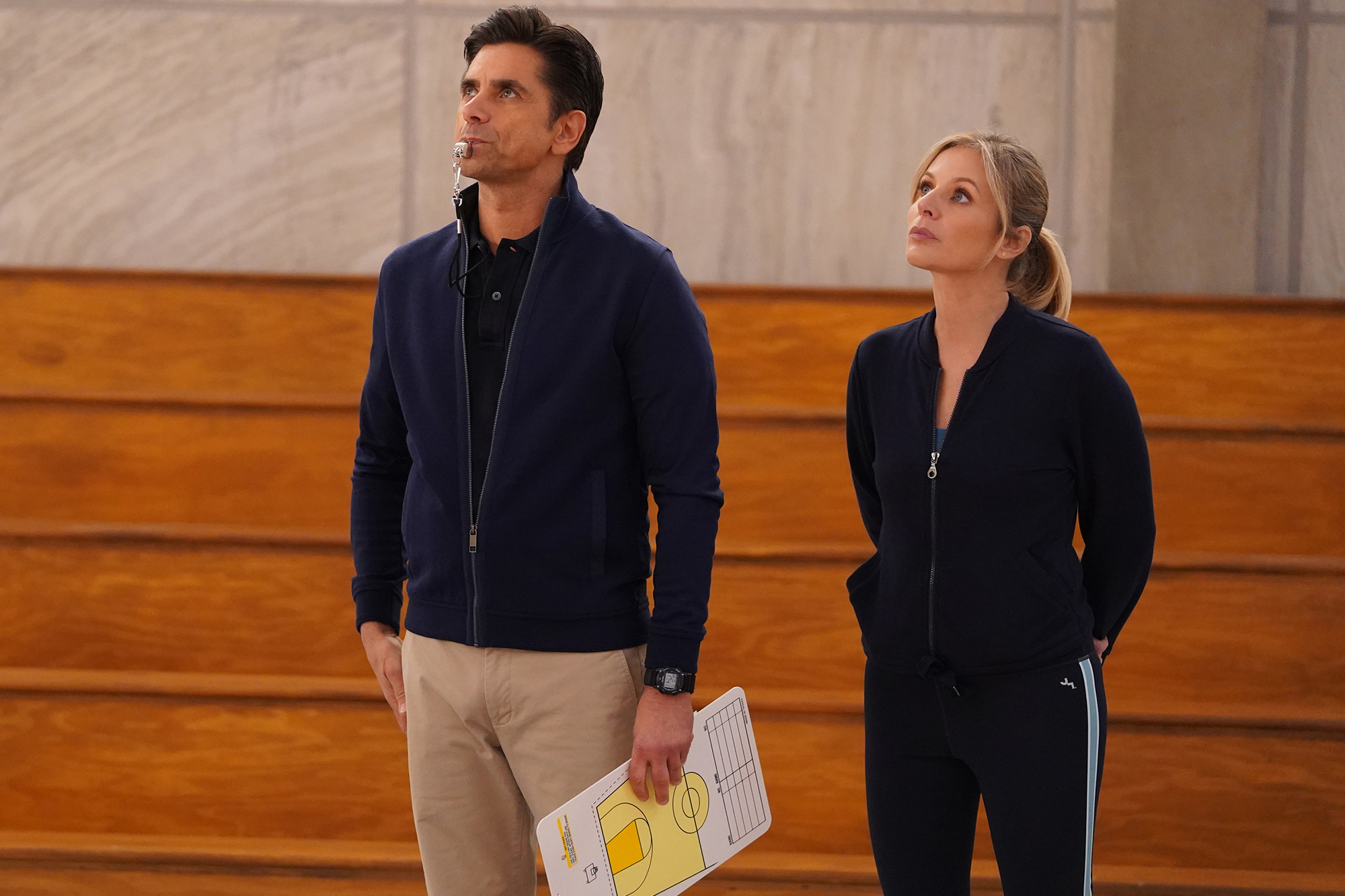 “I was a band geek in school, I’m a band geek now — I never played sports, I didn’t watch sports,” Stamos, 57, told The Post. “It was harder for me to learn basketball lingo than medical lingo when I was on ‘ER’ playing a doctor, I’m not kidding.”

Premiering Friday, April 16, on Disney+ (with new episodes out weekly), the sports dramedy series centers on Marvyn Korn (Stamos), a men’s college basketball coach who ends up having to work at an all-girls private high school as a last resort after his temper costs him his NCAA job — much to his dismay.

“I got a call from my agent saying, ‘You’re getting an offer on the new David Kelley show,’ ” said Stamos. “And I was like, ‘Oh, I love David Kelley! Am I playing a lawyer, is it like one of those dark characters on ‘Big Little Lies?’ And they were like, ‘It’s a show about basketball.’ And my heart just sunk. Of all things! I said, ‘I’m a player?’ and they said, ‘No, you’re a coach.’ And I said, ‘OK, great … what does a coach do?’ ”

Despite reservations, Stamos dove into research, he said, spending time with NBA legend Jerry West, who was inducted into the Basketball Hall of Fame in 1980.

“He told me it’s called ‘practice,’ not ‘rehearsal,’ ” said Stamos.

But it wasn’t just the subject matter that unnerved the actor. The character of Marvyn was outside of his comfort zone, too.

Once he was on set, Stamos decided the best way to inhabit the crotchety coach was to keep to himself.

“I had no outside interaction with the cast. I didn’t want to know the girls very well, I wanted to learn about the girls as Marvyn did. It was hard for me, because that’s not how I usually work,” he said.

In order to inhabit cranky coach Marvyn in “Big Shot,” Stamos said he had to stop himself from getting to know the cast. Disney+

Eventually, Stamos nailed it enough to impress Jerry West, as well as one of his idols: Howard Stern.

“I was getting texts from a New York number I didn’t recognize, and I got one that said, ‘Pick up, it’s Howard and Beth!’ ” he said. “And I FaceTimed them, and they just went on and on about how much they liked the show. He’s a hero of mine and a friend and someone I admire.”

Stamos occupies a rare space in Hollywood, since he’s been prominent for several decades with a host of hit shows under his belt (“General Hospital,” “ER,” “Full House,” “You”) and he hasn’t seen setbacks or faded into obscurity like many stars of ’80s and ’90s shows.

He attributes his industry longevity to his attitude.

“I think the days of being a prima donna are out the door — the days of like, ‘I’m not coming out of my trailer!’ If someone does that, it’s like, ‘OK, next!’ ” he said. “There’s so many actors and actresses out there that need work.”

He gets it, in part, from lessons he learned from his father, the late restaurateur Bill Stamos.

“My dad was a big influence on me in many things. My dad had restaurants, and he would treat the busboy in the back room washing dishes the exact same way he would treat his best customer. I sort of try to keep that.”

Stamos is a relatively new dad himself, since his son Billy (with actress/model wife Caitlin McHugh, 34) is 3 years old. Staying at home with the toddler, who is named after Stamos’ father, has been the silver lining of the past pandemic year, he said.

John Stamos with his son Billy.Marksman/Snorlax/MEGA

“I never would have imagined that I’d get this much time with him. But also, it really hits home what’s important and what isn’t important. Obsessing over your career to me is one of those things that I realize is not as important during this time.”

Quality time with the tot includes watching children’s television together, and showing him snippets of kid-friendly fare that Stamos has done in the past, such as the musical “Bye Bye Birdie.”

“But mainly I’m watching kids shows with him … It sure makes you go like, ‘Oh man, I’m glad I paid attention to the kind of television I did that was geared towards children.’ Because it is a bit of a responsibility,” said Stamos, referring to his long-running stint as Jesse Katsopolis on “Full House” (1987-1995).

John Stamos with his son Billy and wife Caitlin McHugh.ABC

At 57, Stamos is on the older end of fatherhood, but that doesn’t bother him.

“I’m glad that I have time and energy and patience to spend time with a 3-year-old right now and I don’t have to worry about my career as much or money, or things that a lot of people have to deal with. I’m very lucky and grateful.”