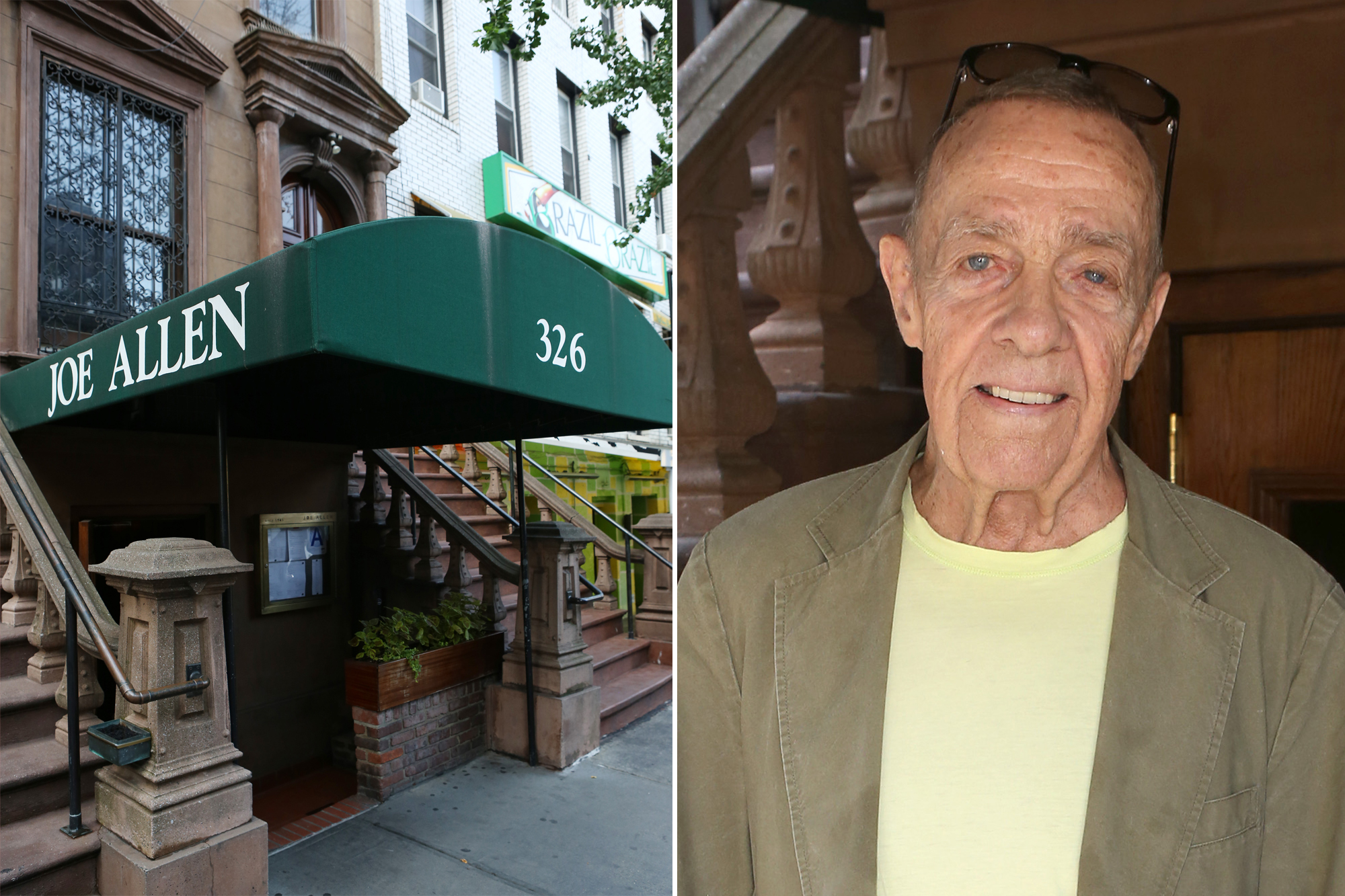 Joe Allen, the Theater District restaurateur whose name was synonymous with a night out on Broadway, died Monday. He was 87.

Although he kept an apartment above his famous New York establishment, Allen had been living close to his children in New Hampshire for the past several months, a spokesman told The Post.

Allen opened his namesake eatery, Joe Allen, on West 46th Street in 1965 as a homey-but-elegant spot for actors and other theater types, although the debonair man had no stage ambitions himself. It was a risky gambit.

The titan of catering to theatrical clientele had long been Sardi’s on West 44th Street, but men were still expected to wear tuxedos there, and your dinner might include bumping into gossip columnists like Walter Winchell or The Post’s Leonard Lyons.

But over at the subdued Joe Allen’s, a dancer could show up sweaty after a performance with her backpack, order a beer and pet Allen’s Labrador retriever Alice, who would cozy up to customers. That was Tony-award winner Chita Rivera’s nightly routine during her run in “Chicago.”

Some of the restaurant’s other early regulars were soon-to-be superstars Marsha Mason and Al Pacino.

Joe Allen, the restaurant, opened on West 46th Street in 1965 as a homey-but-elegant spot for actors and other theater types.WireImage

The owner’s modest gathering of friends fast evolved into an empire, with Joe Allens popping up in Miami Beach, Ogunquit, Maine, London and Paris. The French outpost, which opened in Les Halles in 1972 and now operates under new ownership, was a cause célèbre in the press at the time for being the first to export the American hamburger to fickle France.

In 1983, Allen opened the Italian spot Orso next door on 46th Street, and the old-school speakeasy Bar Centrale upstairs in 2005. Alongside the celebs at Centrale, where all the boozy drinks come with sidecars, you can find longtime Joe Allen general manager Mary Hattman manning the host stand most nights.

“It’s a sad day for all of us,” Hattman told The Post. “I loved Joe dearly and will miss him forever. He brought so many people together.”

Allen’s spirit of conviviality endured even into the pandemic. Joe Allen’s has been shuttered during most of the past year, but reopened for two months in the fall at reduced capacity. On its first night back, Oscar winner Joel Grey, a customer since the late ’60s, was there at his table, smiling and waving to other happy devotees.

Missing, though, was the man who made it all happen.

“Joe Allen was as much a part of the fabric of the theater community — frankly, as much a star — as anyone who ever dined or drank at his establishments,” said Broadway publicist Rick Miramontez. “I am sorry he won’t be sitting on his barstool when Broadway finally comes roaring back, but his presence will be felt for many, many years to come.”

Days before the restaurant began serving burgers again in September, Rivera fondly recalled her romance with Allen in the ’70s that bloomed at his restaurant.

“I went out with Joe for a little bit during ‘Chicago,’ and nobody knew that he was a warm, funny guy that really cared,” Rivera, 88, said. “I just want people to know that he is that guy. He is Joe’s.”