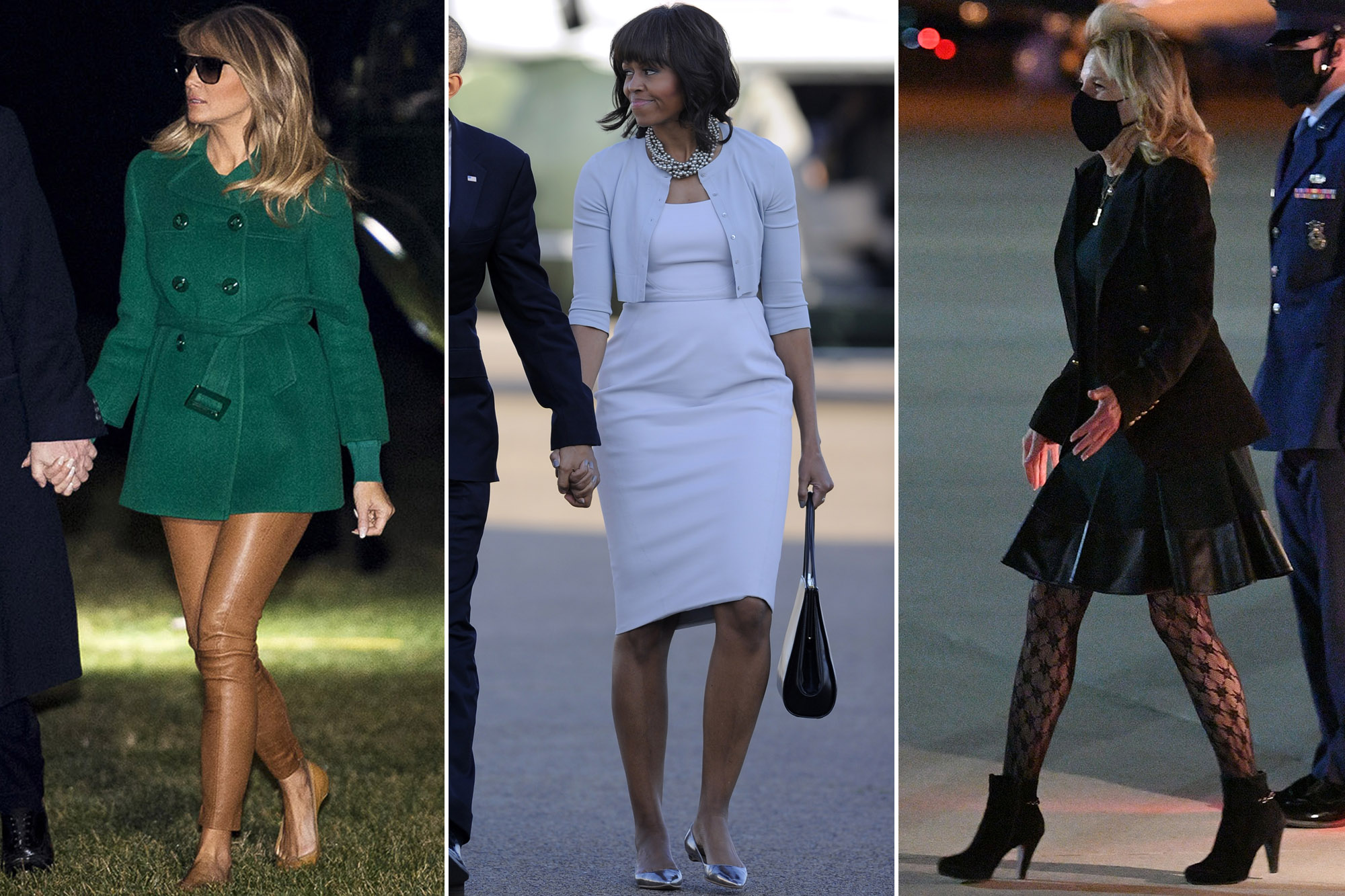 It’s a delicate subject for FLOTUS.

Jill Biden, 69, knocked observers’ socks off when she strutted off Executive One at Andrews Air Force Base in Maryland last week sporting a pair of black patterned fishnet pantyhose.

While some took to social media to celebrate her stylish stockings, others annihilated the president’s wife for rocking the head-turning nylons.

But she’s not the first first lady whose fashion-forward legs have sparked sheer chaos.

“High-power women and hosiery has been a hot-button issue for years,” lingerie expert Cora Harrington told The Post.

Michelle Obama, Melania Trump and Meghan Markle have all come under fire for flexing their gams however they saw fit.

Obama, now 57, nearly sent the nation into a state of emergency when she publicly denounced pantyhose during a casual chat on “The View” in 2008. She slammed the sheers for being “inconvenient” and “always ripping,” angering traditionalists who deemed stockings essential dressing for powerful women.

A decade later, Trump, now 50, wasn’t immune from controversy when she sported a pair of barely there, flesh-colored leggings beneath an upper-thigh-length jacket when she deplaned at Andrews in 2018.

“There seems to be a warped, unspoken expectation of wives and spouses of powerful political leaders,” said Harrington, whose book on the evolution of lingerie, “In Intimate Detail,” came out in 2018. “That they should be demur or sedate, almost invisible. And they shouldn’t do or wear anything that gets any attention.”

The Duchess of Cambridge, Kate Middleton, 39, is often praised for following royal wardrobe protocols by wearing nude pantyhose whenever she’s in public — especially while in the presence of the queen.

However, Markle, 39, boldly boasts her bare legs whenever she likes.

Her choice to go hose-free in her engagement pictures in 2017 and while attending a charity performance of “Hamilton” at London’s Victoria Palace Theatre in 2018, nearly caused a castle coup.

“You never see a royal without their nude stockings,” royals expert Victoria Arbiter told the press at the time. “I would say that’s really the only hard, steadfast rule in terms of what the queen requires.”

Why is everyone so uptight about ladies’ tights — or lack thereof?

Pantyhose made from silk or rayon were first popularized in the 1920s, along with shorter hemlines. DuPont first introduced nylon hosiery at the 1939 World’s Fair in New York; 4 million pairs were sold in four days when they went to market the following year.

Throughout most of the 20th century, stockings have been synonymous with femininity and required for any polished look.

Racier fishnets — with diamond-shaped patterns tending to accentuate curves and draw attention to the leg — were favored by the pin-up models of the 1950s.

Political spouses aside, the must-have pantyhose mentality started getting the old heave-ho in the late 1990s.

“Society has seen movement away from pantyhose as a fashion accessory since the turn of the century,” Harrington said.

“The end of that trend is tied to the increased casualization of dress code in America,” she said, noting the country’s recent embrace of athleisure. “Women in the workplace and in society are no longer expected to cover up their shins and calves with tights, but they’re totally free to do so if they want. And that’s great, having that choice is great.”

And while Biden’s avant-garde choice to outfit herself in fishnets caused an online uproar, it also opened up a much-needed dialogue about fun, femininity and fashion for women of all ages and classes.

“Now, more people will look at [Biden’s] outfit and think of ways that they can express themselves through clothes without fear of criticism,” said Harrington. “[They’ll think,] ‘If the first lady can wear whatever makes her feel confident and empowered, face some judgment, but still walk around with her head held high, so can I.’ ”