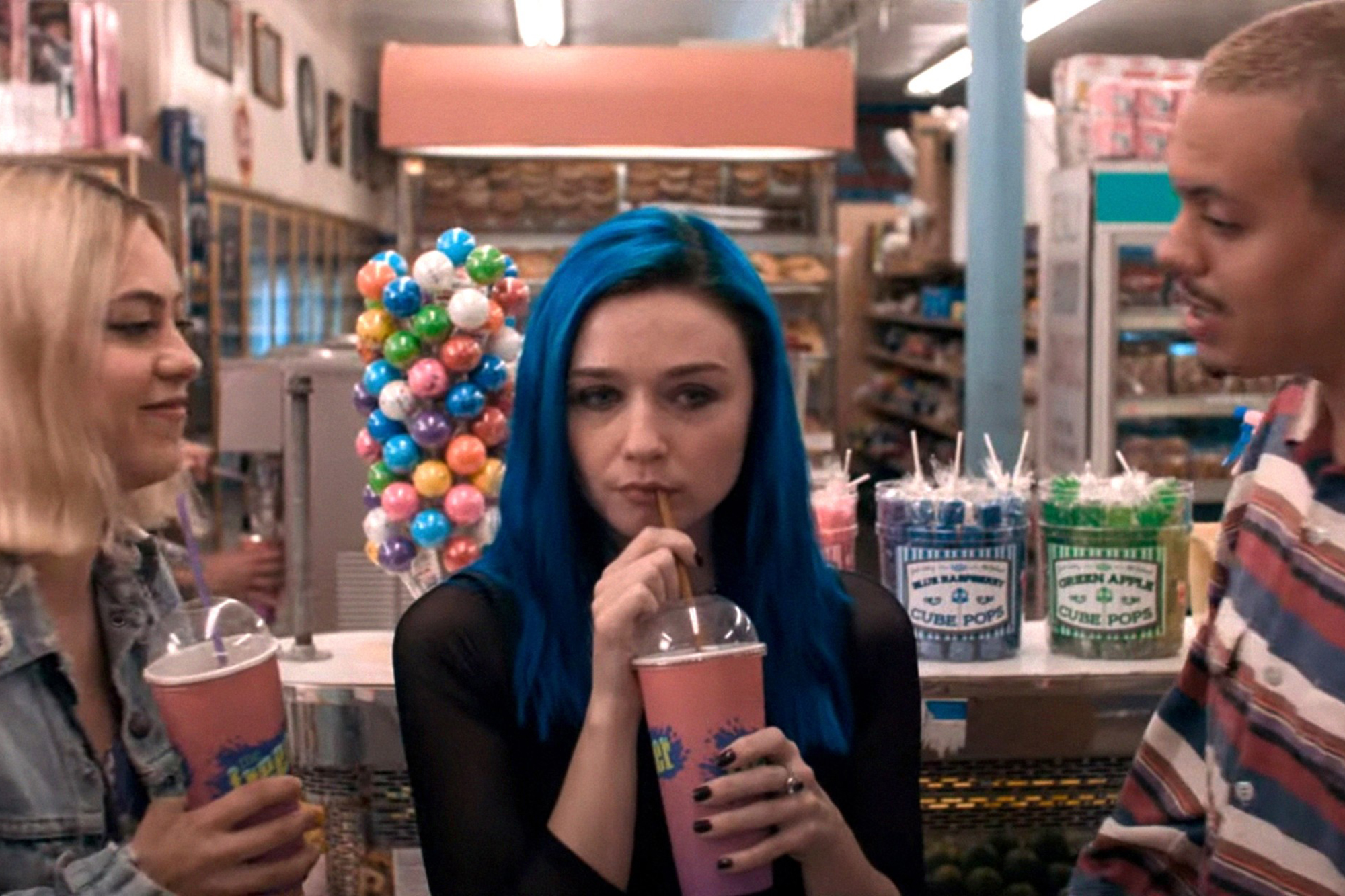 “Pink Skies Ahead” star Jessica Barden has a personal connection to the movie — and its focus on mental health awareness.

“At the time I was making the movie I was like everybody else, a typical kid in their 20s [and] I definitely knew I had anxiety,” Barden, 28, told The Post. “I thought, ‘Oh, I’m just this anxious person, I get nervous…get these adrenaline rushes.’ People were like, ‘You’re so confident, you have so many friends, how can you have anxiety and be an actress?

“But I knew I was having anxiety attacks as well.”

“Pink Skies Ahead” airs Saturday at 9 p.m. on MTV and sister network Pop TV as part of MTV’s “Mental Health is Health” initiative. It’s based on Kelly Oxford’s book, “When You Find Out the World is Against You” (Oxford also directs).

The British-born Barden plays Winona, a 20-year-old living in 1998 LA with her loving parents, dad Richard (Michael McKean) and artsy mom Pamela (Marcia Gay Harden). Winona, an aspiring writer, dropped out of college and is working a dull desk job in her father’s office — while driving him back and forth from work using her learner’s permit (she’s flunked her driving test several times). She parties with her friends Stephanie (Odeya Rush) and Addie (Rosa Salazar), drinks a lot of slushies and starts dating an older PhD student, Ben (Lewis Pullman) — but seems stuck in neutral.

Winona feels a lump under her armpit and visits her pediatrician (!) Dr. Cotton (Henry Winkler), who diagnoses her recurrent aches and pains as an anxiety disorder. She’s skeptical; she’s never had a panic attack and doesn’t feel depressed, but takes Dr. Cotton’s advice and visits a therapist, Dr. Monroe (Mary K. Blige) — admitting, through tears, her “deepest, darkest” secret: “I think I’m an a–hole.”

“I think our generation has gotten to the point where [mental health issues] are more open and you get help,” Barden said. “It’s accepted that you have a therapist and that some people will take medication. It’s no big deal. It’s whatever your mess is to get there, and I think part of the movie is telling you that it’s fine to be like that.”

Determined to move forward, Winona gets a job at a clothing store and, on her first day, melts down — having a panic attack she blames on too much coffee. “That scene resonated with me the most…that used to happen to me so much, not passing out, but I’d be in an audition and start talking and not thinking about anything and in the middle of a scene I’d be like, ‘Whoa, why do I feel like I’m going to pass out?’ That happened for, like, two years and I had no idea what was happening. I thought, maybe I didn’t eat enough — but I was having panic attacks and just didn’t know it.

“In the middle of conversations I would forget how to breathe,” she said. “I used to have stage fright and no one ever knew. It’s crazy what your brain does. I would never forget a line…but inside, every single part of my brain was ringing. It was wild.”

Barden said that what Winona experiences in “Pink Skies Ahead” vis a vis her internal emotions and thoughts is a common part of life — whatever your age group.

“She feels like, ‘Why can’t I pass my driver’s test, I don’t know what I really want to do at college or at a job — I have no idea what’s going on. I’m so horrid; I’m a failure. I’m trying and I don’t get it.’ She’s completely confused about herself, but viewers will think, ‘That’s actually fine. Your life is OK, you just don’t like yourself.’ They can understand that.

“I think they’re going to see Winona go on a journey of trying to be calmer and not placing so much pressure on herself,” she said. “When you’re 20, there is so much pressure on you and that doesn’t need to exist. Her focus stops being, ‘How do I distract myself and silence everything and make the most noise’ and she realizes that it’s OK to listen to the noises inside your head, it’s OK to have a bad week, it’s OK to have no idea what you want to do with your life.

“The journey is in not distracting yourself, in learning to be present in your life,” she said. “People can go their whole lives without realizing that.”