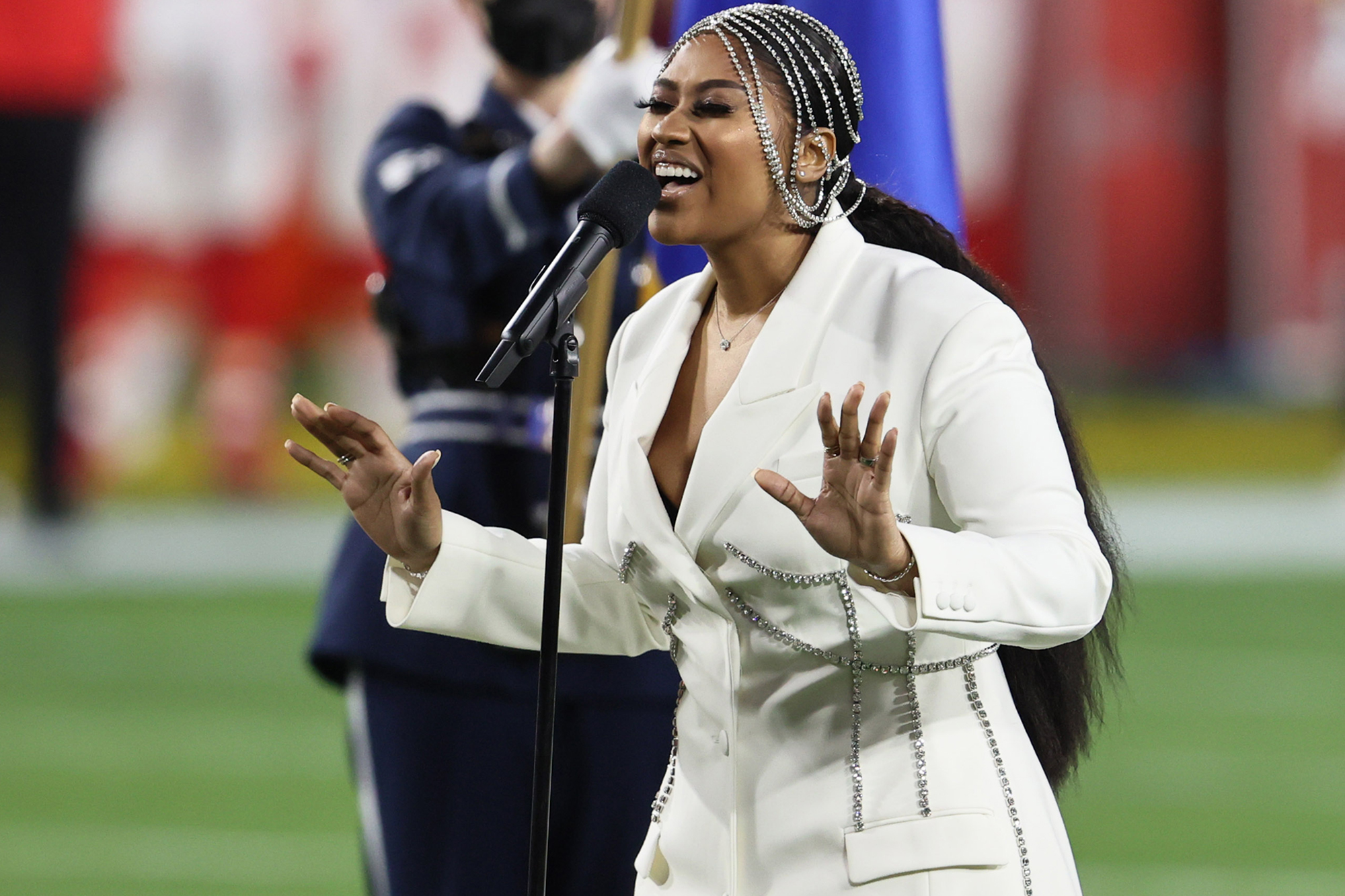 Super Bowl 2021 threw us an odd couple for the ages when they paired country star Eric Church, 43, with R&B diva Jazmine Sullivan, 33, to sing the national anthem.

Clearly, it was an attempt to unite the country — and fans of two very different musical genres — in some much-needed harmony after the political divisiveness that has been plaguing us as much as the pandemic.

But really, did Sullivan even need Church? The 12-time Grammy nominee practically blew away the “Springsteen” singer — from a proper social distance — once she opened her mouth.

The finest moment for Church, who also played the guitar, was opening “The Star-Spangled Banner” alone with his cool country twang — although he gets extra points for rocking that purple suede!

Eric Church, a country singer, rocked a purple jacket and his guitar for the 2021 national anthem. USA TODAY Sports

It was almost like pitting a lightweight against a heavyweight once Sullivan let her powerhouse pipes loose. She practically drowned him out when the two sang together — these were not two voices made to blend for a duet.

Makes you wonder why Sullivan, in her classic white suit and crystal headpiece, just didn’t get the chance to sing the national anthem all on her own. No doubt, she was the winner of this match-up.

R&B singer Jazmine Sullivan donned a classic white suit — similar to the one worn by Beyonce at the 2004 Super Bowl — as she belted out the National Anthem.USA TODAY Sports

And the national anthem duet failed to compete with H.E.R.’s version of “America the Beautiful” that preceded it. Beginning with a beautiful, stripped-down restraint that got to the soul of the song, the Grammy-winning R&B star then channeled Prince and launched into some guitar fireworks that lit up Raymond James Stadium before the Tampa Bay Buccaneers faced off against the Kansas City Chiefs.

When all was said and done, H.E.R. was the star bursting in air on this occasion.

The Super Bowl 2021 anthem time of Sullivan and Church’s performance — a popular topic for online betters — came in at 2:24 by many counts.

Church and Sullivan’s duet joins the ranks of some of the best National Anthem performances of all time — but of course couldn’t come close to patriotic pipes of Ms. Whitney Houston.

The “Star Spangled Banner” wasn’t the only entertainment to rally up the crowds. Before the festivities officially began, Grammy-winning singer Alicia Keys, 40, sang a reflective tribute to black lives in a pre-recorded segment. The song, “Lift Every Voice and Sing,” is often referred to as the “Black National Anthem” and was written by NAACP leader James Weldon Johnson.

Sullivan and Church were an unlikely — but very emotional — pairing at Super Bowl 2021.AP