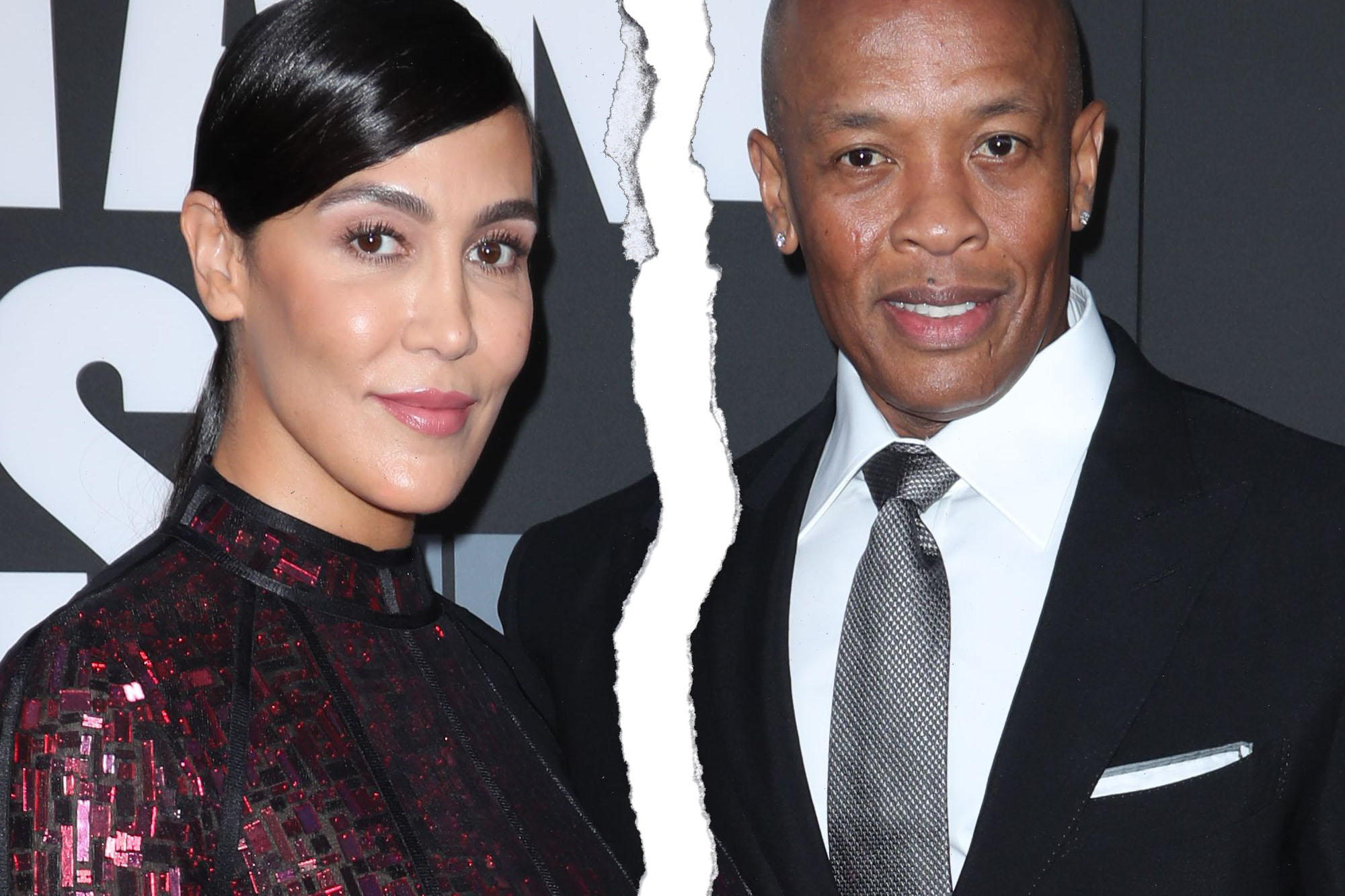 Dr. Dre’s personal life has been imploding in recent months — well before he was struck down by a brain aneurysm and hospitalized on Jan. 4.

A bitter divorce had gotten even messier when his wife of 24 years outed his alleged mistresses. Then, one of his daughters, LaTanya Young, went public to say she hasn’t seen her father in 17 years, adding that the hip-hop mogul has never met his grandchildren.

Insiders say the drama, not to mention his medical crisis, has taken a toll on the famously controlling 55-year-old rapper and super-producer who made his way straight outta Compton to conquer the music industry.

So much so, said an insider, that Dre abruptly agreed to give his estranged wife Nicole Young a one-time payout of $2 million to tide her over until the pair go to court again in April. Dre (whose friends call him Andre, his given name) reportedly signed the agreement from his Los Angeles hospital bed. He is said to have been released on Jan. 15 and is back at home. Two days later, an Instagram photo showed him in the studio.

Before this latest move, many thought Dre had the upper hand in the split from Young, 51, who filed for divorce last June 29. “He can be the ­nicest, gentlest person, even shy,” a Dre insider told The Post. “But if you cross him, you’re f–ked.”

In fact, a longtime associate added: “You better not write anything he doesn’t like. We’ll hunt you down.”

But Young has been standing up to her estranged husband. She began exposing dirt on him last fall, claiming in legal papers that Dre is hiding ­assets as well as relationships with other women from her. Then, days before he suffered the aneurysm, she filed court documents accusing him of once holding a gun to her head, punching her in the face and slamming her against a wall.

Young said she filed the new court documents about the alleged abuse after Dre stated in divorce declarations early this month that “at no time did I abuse Nicole or threaten her physical safety” during their 24-year marriage. He also said there was no evidence claiming such abuse.

“It is misleading, revolting and insulting for Andre to suggest that I have not been abused because, as a victim of relentless abuse and isolation, I did not create and maintain a contemporaneous record of the abuse inflicted on me,” Young said. “It is well known and accepted that most victims of domestic violence do not have documentary evidence of their abuse.”

A few of the rappers who helped build Dr. Dre’s fortune

After hitting it big in the ’80s with the Los Angeles gangsta rap outfit N.W.A, Dr. Dre released his mega-selling solo debut, “The Chronic,” and discovered, produced and signed a slew of acts to his record labels. Among the rappers he’s launched to stardom:

Insiders who doubted Nicole was going to outsmart Dre in her attempt to break a 1996 prenup and grab a chunk of his estimated $800 million fortune now are having second thoughts. Some friends of Dre resent her for it.

“She is throwing the father of her children under the bus,” said one ­insider. “It broke his heart.”

Nicole does not have a career of her own, but claims she “played an important role” in Dre’s trajectory, which included being “integral” to the naming of his record label, Aftermath.

The rap icon made his money the hard way. Born to teenage parents who split up not long after he was born, ­Andre Romelle Young came up on the rough streets of South Central Los Angeles. He formed N.W.A with Eazy-E and Ice Cube in 1986, revolutionizing West Coast hip-hop. Dre co-founded Death Row Records before leaving to start ­Aftermath.

With Dre is long considered one of the shrewd­est and most gifted players in music, many believe he will still  prevail in the war with his ­estranged wife.

“Dre is the brains running this show,” said private investigator John Nazarian, who knows all the players in Los Angeles’ high-net-worth divorce industry and blogs at Desperate Exes. “Nicole is the one being manipulated by lawyers.”

Nicole has claimed in court that she was pressured to sign a prenup upon their 1996 wedding and that Dre — in a dramatic show of romance — later tore it up. In response, he filed in court what he said was the prenup; it states that property they each acquire during the marriage remains their own.

Among the homes
Dre and Nicole
share are a $40 million
Brentwood, Calif.,
mansion
bought from Tom
Brady and Gisele
Bündchen.Carrillo/©CelebrityHomePhotos.c

Recent reports indicate Dre has been giving Young $293,306 a month in temporary support.

Nicole also filed papers demanding to know if Dre fathered illegitimate kids during their marriage. The two have a son Truice, 23, and daughter, Truly, 19. Dre also has at least seven older kids by five women, including a son, 38, he allegedly didn’t meet for 20 years.

Dre’s daughter LaTanya Young, 37, told the Daily Mail last month that she hasn’t seen her dad in 17 years and he’s never met her four kids. Even when she was little, LaTanya said, she had to go through staffers if she wanted to reach her father.

Dre’s own dad, Theodore Young, sounds as if he has even less of a relationship with his son.

“I haven’t seen Andre since his grandfather died and I can’t even remember when that was,” the 73-year-old told The Post from his home near Sacramento, Calif. “We have no relationship. My other sons love me. They tell me they love me. But coming from where I come from, most young men like Andre who have a big success don’t give a damn about their dad.”

Theodore said he and the rapper’s mom, Verna, who has accused Theodore of abuse (he denies this), split not long after Dre’s birth. “His grandmother raised him,” Young told The Post. “His mother and grandmother sprinkled a whole lot of salt on me.”

Dre has not spoken much about his father or responded to his older daughter’s recent claims. But he has copped to some past bad behavior — particularly with women — and doesn’t want to be seen as misogynistic or abusive in his divorce, sources told The Post.

In 2015 he publicly apologized “to the women I’ve hurt” as three women — journalist Dee Barnes, his ex-fiancée Michel’le, and singer Tairrie B — told The New York Times that Dre had abused them.

“He is a violent abuser of women who has never actually addressed his misogyny or past brutal attacks with any true remorse for his actions,” Tairrie B, aka Tairrie B. Murphy, told The Post.

Industry insiders wonder how the drama will play into Dre’s music.

Rumors have been rampant that his long-awaited fourth album, “Detox,” begun in 2002 and described as his “final album,” might finally come out soon. But Dre, a notorious perfectionist, has been sidetracked over the years by signing and producing stars like Snoop Dogg, Eminem, Kendrick Lamar, 50 Cent, Busta Rhymes and others. He was also interrupted by the creation of Beats headphones, which he and partner Jimmy Iovine sold to Apple for $3 billion in 2014.

“Everyone’s been waiting to hear this album but now it looks like he’s been detoxing his own demons,” an insider said. “All this stuff is going on with him. Rap is all about spitting the truth, spitting game. Maybe it’s been easier for him to focus on other artists.”