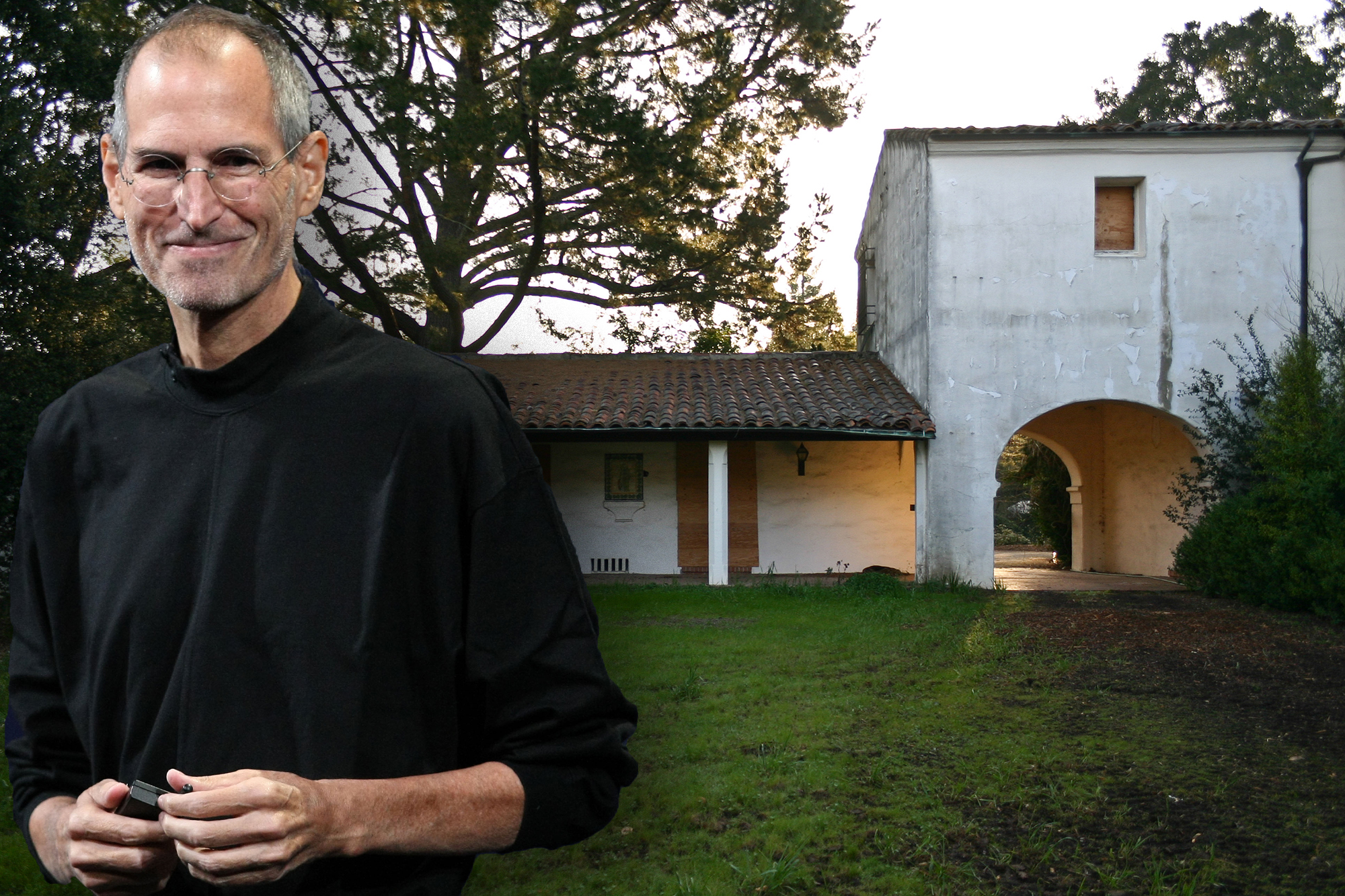 Steve Jobs spent over a decade trying to demolish his Woodside, California mansion — which he would eventually succeed in doing in 2011 during the final year of his life.

But before the historic estate was destroyed, photographer Jonathan Haeber — who dedicates his free time to shooting abandoned homes — was able to cross the gates of the property and capture exclusive photos that would’ve otherwise never been seen by the world.

The result? Beautifully haunting photos that explore the legendary man who pioneered the revolutionary Apple brand.

Also known as the Jackling House, the mansion was first built in 1925 by renowned architect George Washington Smith – who was considered the foremost creator of the Spanish Colonial Revival architectural style that became popular in the United States and remains so today.

The sun rises on the boarded-up and then-abandoned Jackling House. Credit: Jonathan Haeber

A certificate labeled “International Business Machine’s Corporation” included a plaque from a man named Regis on Feb. 24, 1985. It read: “Thought I would buy you IBM for your 30th birthday.” Credit: Jonathan Haeber

A chandelier at the center of an old living area with a wood burning fireplace. Crosses were engraved against a concrete wall. Credit: Jonathan Haeber

A Sept. 30, 1985 Newsweek Magazine placed on top of other documents. The caption of the paper read: “A Whiz Kid’s Fall.” Credit: Jonathan Haeber

The home was designed for copper mining magnate Daniel Jackling and the estate represented his aesthetic values and wealth.

Spanning 17,250 square feet and made up of 30 rooms, it contained a built-in residence pipe organ that would become the main focal point of the home.

Smith integrated the residence, which sits on 6 acres, with landscaped gardens and a large traditional courtyard, including open-air balconies and many indoor-outdoor access connections.

A silver-plated chandelier with red glass hung from the ceiling in a room with red and gold-colored wallpaper. A hole had formed in the ceiling. Credit: Jonathan Haeber

A chandelier made of copper hung in the center of the grand staircase. Credit: Jonathan Haeber

An oval-shaped archway was cemented over a staircase. Jonathan Haeber

A vintage crafted sink nailed against a gray-patterned wallpaper was seen in one of the abandoned bathrooms.Credit: Jonathan Haeber

Jobs understood the historical value of the estate, and would come to purchase the home in 1984 for $3.5 million, property records show. But as his mounting success continued, Jobs wanted to demolish what he saw as a complicated home, and build a smaller, minimal home.

Starting in 2000, Jobs stopped maintaining the home to force the city to demolish it. He spent a decade fighting local preservationists and the State’s Historical Resources Commission to tear down the structure.

Sunlight creeps into an isolated window located in one of the bathrooms. Credit: Jonathan Haeber

A view of the exterior featuring a Juliet balcony and mahogany panelling. Credit: Jonathan Haeber

An old refrigerator sat in the basement. Credit: Jonathan Haeber

The siding of the property gave off an eerie vibe as nature molded into the structure. Credit: Jonathan Haeber

Eventually, in May 2009, the Woodside Town Council granted the permit to demolish the home, with the condition that Jobs must allow the house to be disassembled and moved elsewhere. In February 2011, the home would be demolished.

An exhibit of the home, which includes furniture, maps and photographs, is housed at the Woodside Community Museum.

Haeber, 39, has explored almost 20,000 abandoned sites, but the Steve Jobs mansion remains one of his more vivid memories.

“I had a lot of great memories at that place,” Haeber told The Post, adding that it took him over a span of six months to capture the home in its entirety.

Another view of the expansive structure which included a covered balcony. Credit: Jonathan Haeber

Tiled Catholic art was embedded against the concrete wall of the home. Credit: Jonathan Haeber

The staircase was made with gold trimmings that faded over time. Credit: Jonathan Haeber

“It’s the same feeling I have in any abandoned house I go to,” he said. “It’s a discovery of my own. I was the first unauthorized photographer there. The feeling changes completely when you acknowledge that.”

“It was about urgency and excitement: This is the last chance that I will have to capture something and no one else could do it,” he added.

Haeber revealed that many items of the home were seen being thrown away in the dumpster, and he felt compelled to capture them.

“It was an important historical record of Steve Jobs because there were personal items.”

The roof was built with barrel clay, adding to the Spanish architectural design. Credit: Jonathan Haeber

A secret set of stairs led to a closeted room. Credit: Jonathan Haeber

A closet with gold-plated pieces, which likely was used to hang clothing.

Among those personal items, Haeber said, was an old will and testament that Jobs had first written that was placed on the kitchen counter. Haeber claimed to The Post that the will included a sole family member at the time, but he wouldn’t disclose the name.

Upon Jobs’ death his widow, Laurene Powell Jobs, was left his fortune.

Haeber admitted that he struggled with releasing some of the photos out to the public, noting he felt guilty that he was invading Jobs’ privacy. But in the end, he said he came to realize that it was a part of history that needed to be recorded.

A sign located in the industrial room used to water the grounds. Jonathan Haeber

Haeber also believed that Jobs wanted outsiders to come through the home in an effort to speed up the approval process to demolish the property.

“I sort of discovered I could walk through the front door. It was eerie, almost like Steve Jobs was inciting people there,” he explained. “When they don’t have permission to demolish a house, then they want people trespassing because it would lead to vandalism.”

He recalled that “when you first walked into the house, the outside gate had a smiley face – a hand-drawn smiley face.”

The windows and doors had mostly been boarded up. Credit: Jonathan Haeber

A closer look at the vintage sink. Jonathan Haeber

A cemented wood-burning fireplace with a wood-paneled wall. Jonathan Haeber

A closer look at the dust-filled pipe organ. Jonatha Haeber

The pool, along with the landscape, remained one of the only features of the home that had been well-kept. Jonathan Haeber

While the rest of the house was mostly in decay or left to the elements surrounding it, the pool was well-maintained.

“I went out there one night and went for a swim in his pool,” Haeber said, letting out a slight chuckle. “Jobs had full intention of keeping the landscape and the land. His idea to demolish the home was so he could put in a smaller house, more to his liking. So it’s normal for abandoned homes to have someone maintain the pool.”

Haeber noted that he felt a connection to Jobs when he noticed a vintage 1970s camera situated against a wall in one of the main rooms of the mansion, which allowed him to understand why the cameras on iPhones were high quality.

“I started feeling sort of connected to him,” Haeber said. “Even though we had completely different lives, there was this artifact that reminded me of myself, and it kind of humanized him. He is just like the rest of us in many ways.”

“I look back at photographing that place very fondly.”