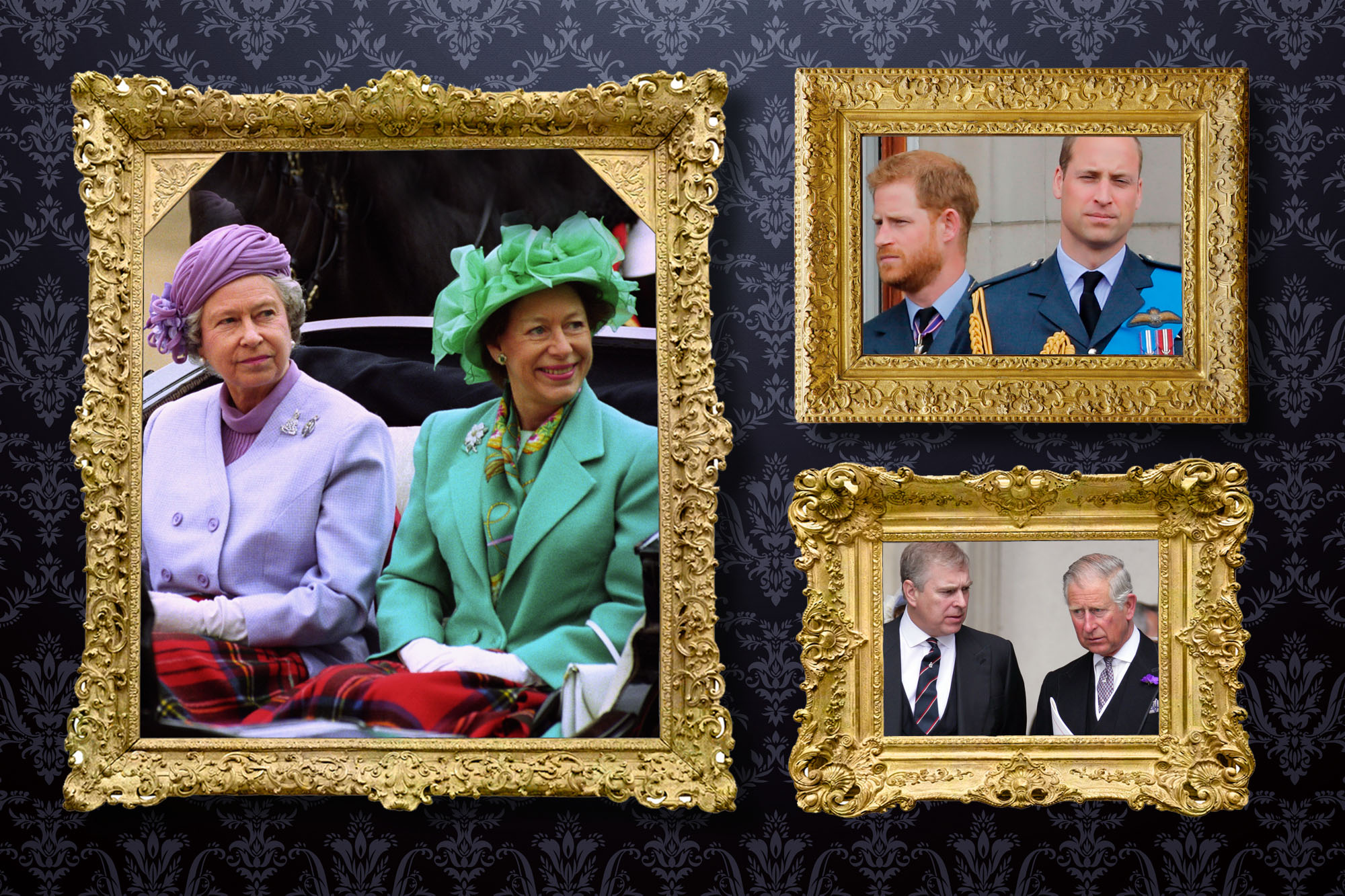 Every generation of the House of Windsor is stalked by a shadow: the good royal versus the naughty royal sibling.

Charles the patient versus Andrew the foolish. William the cautious matched against reckless Harry. It even extends to sisters-in-law — Diana the demure, Fergie the noisy roustabout; Catherine the demure, Meghan the forceful.

As Princess Margaret, Queen Elizabeth’s feisty younger sibling, once said: “When there are two sisters and one is the queen who must be the source of all honor and all that is good, the other must be the focus of the most creative malice, the evil sister.”

At times Margaret lived up to that stereotype: the black sheep of the family who broke the rules of love and romance, as when she dated a jobless gardener 17 years her junior.

Yet these stereotypes mask as much as they reveal, as I write about in my new book, “Elizabeth and Margaret: The Intimate World of the Windsor Sisters.” Throughout their lives Elizabeth and Margaret butted heads — the sensible, older sister matched with the mischievous, willful little sister. Yet they were united by a primal bond, a private world only they could share. Central to that bond was Margaret’s unflinching loyalty to her sister. She was Elizabeth’s wingwoman, able to say things that a queen would shy away from expressing.

Queen Elizabeth is determined to be fair to her grandsons Harry and William after seeing how her sister, Princess Margaret (in green), suffered in her shadow. Getty Images

The tragic death of Princess Diana, Elizabeth’s former daughter-in-law and the mother of future king William, in August 1997 went to the heart of the bonds between royal sisters and brothers. This was salt-and-pepper royalty at its spiciest.

The way Margaret and the queen navigated the trauma of the funeral week highlighted their different temperaments and positions — as did the ensuing conflict between Prince Charles, heir to the throne, and his younger brother Prince Andrew.

Margaret was her sister’s alter ego, saying the things the queen might think but could not possibly comment on as both head of the House of Windsor and head of state.

Margaret’s view, which echoed the initial response of her sister, was that the family should have as little to do with the funeral as possible. She complained bitterly about the “fuss the unfortunate girl who married my nephew has caused.” A private funeral for a private citizen was her verdict, though she did not win.

At Kensington Palace, she grumbled over the smell of rotting cellophane-wrapped flowers — five feet deep in some places — left by mourners and piling up outside the gates near Margaret’s home.

Brought up never to show feelings in public, both sisters found the wailing and keening hard to understand.

Margaret showed her displeasure on the day of the funeral. As they stood outside the gates of Buckingham Palace waiting for the gun carriage carrying Diana’s body, somewhat bizarrely, Margaret was talking to her sister about improving the lavatories at Kensington Palace. While the queen, who stood with the rest of the family outside Buckingham Palace, respectfully bowed her head as the funeral cortege passed, Margaret gave the barest of nods. (She had never forgiven the late princess for having granted a television interview about Diana and Charles’ failed marriage.)

Meanwhile, that same week, Charles contradicted his mother, by siding with then-Prime Minister Tony Blair in arguing for a funeral befitting of a woman who occupied a special place in the hearts of millions.

Symbolically the final battle between tradition and political expedience was fought out in the queen’s second-floor sitting room, a royal retreat that has scarcely changed since Queen Victoria’s day. During the back-and-forth of argument about whether the queen should return to London from her vacation home at Balmoral Castle in Scotland and give an address to the nation, Andrew walked in.

Hearing the raised voices, he angrily told the assembled courtiers: “The queen is the queen. You can’t speak to her like that!”

Harry (left) and William — the future king of England.Getty Images

Though politically naïve and of poor judgment, Andrew is intensely loyal to his mother. She reciprocates. It has long been said that he, rather than future King Charles, is her favorite son. Bumptious, noisy and charming when he wants to be, Andrew has some of the characteristics of his father, Prince Philip. Like his father, he fought in a war, piloting a Navy helicopter during the Falklands conflict in 1982.

He was a marked man: Argentinian high command believed that if they could kill or capture the then second-in-line to the throne the war would be over. Andrew’s courage on the front line earned him the description of war hero, a status that rankled with Charles, his polar-opposite brother who was jealous of the younger brother’s involvement.

What a difference a generation makes. Andrew’s association with sex offender Jeffrey Epstein ruined his reputation inside and outside the House of Windsor. In the aftermath of a car crash of a November 2019 TV interview in which Andrew showed no empathy for the victims of his pedophile pal and offered laughable defenses for his own alleged relationship with a teenage girl, Charles swung into action against his brother.

Elizabeth’s son Charles (right), long jealous of his younger sibling, swept Andrew aside as soon as he could.Getty Images

Charles, who was in New Zealand on an official visit when the interview aired, telephoned the queen and coerced her to strip her favorite son of his royal duties. After days of headlines, including reports of the rapid exodus of his charities and sponsors, Andrew finally issued a statement saying that the queen had given him permission to step back from public duties for the foreseeable future.

It was a brutal, swift end to his royal career, orchestrated by his brother. As Charles has made it clear that he wants a slimmed-down monarchy when he is king, it suited his purposes to see Andrew’s head on a pike staff.

Prince William may well feel the same way about his younger sibling after Harry recently broke the bond between brothers by blurting out to Oprah allegations of racism inside the family and accusations that William and their father were trapped in an institution that restrains its members.

It was a brutal, swift end to his royal career, orchestrated by his brother.Andrew Morton on Prince Andrew’s duties being taken away by Prince Charles

For all her faults, Margaret would never have spoken publicly in this way about her sister. Loyalty mattered most. The nearest she came was when she confessed that the royal family had “jolly good rows” — some between her and her sister — but never rifts.

In many ways the queen’s treatment of her grandsons reflects the lessons she has learned from watching her sister grow. Margaret was, for years, intensely resentful that she was tail-end Charlie — the perennial No. 2, be it at ceremonial events or being given her big sister’s hand-me-downs.

While Elizabeth as the elder sibling had a career mapped out for her, Margaret had to find her own way. Just as galling, she felt that she was the glamorous sister, the one who, in partying with the Rolling Stones and reportedly taking Warren Beatty as a lover, conferred showbiz pizzazz on the venerable ­institution — and her dutiful sister.

In her own way, the queen has spent time and energy on both of Charles’ sons, training William for kingship but ensuring that Harry, unlike Margaret, was not left out of things. Her appearance in a 2016 video with Harry to promote the ­Invictus games for wound­ed servicemen and women, was a classic example. The clip showed the Obamas telling the Brits to “bring it on.”

William and Harry take part in a relay race, during a training event to promote the charity Heads Together, in 2017.POOL/AFP via Getty Images

When a member of Team Obama said “Boom,” as if dropping the microphone, the queen looked at Harry quizzically and said wryly, “Boom, really.” It was a fun video that showed the queen wanted to encourage Harry in his endeavors. Over the years they developed a jaunty relationship — for Christmas, he bought the queen silly gifts like a hairnet or a singing Billy the Fish.

In his and wife Meghan’s notorious Oprah interview in March, he singled out the queen for praise while dissing the institution she has represented since 1952.

The queen would have agreed wholeheartedly with Princess Diana, who always told me that she saw Harry as William’s backup — but in the nicest possible way. With Harry now out of the picture, at least for the foreseeable future, the queen’s full focus is on William. He has been learning the ropes from his grandmother ever since he was a pupil at swanky Eton school near Windsor Castle and saw her most weekends.

Queen Elizabeth with Princess Margaret at the Badminton Horse Trials in 1975.Getty Images

The fallout from the Oprah interview — and the subsequent review into claims of ­racism and bullying within the palace — ­ensures that the queen, 95 this month, will hold the reins of monarchy even tighter.

In the sunset of her long reign the queen has seemed more relaxed and at ease now that she undertakes her engagements on ­social media. Funny, too, her bone-dry sense of humor often on display. She has made it clear that she ain’t going anywhere. But it will be Charles and William who are left with the heavy lifting of royal duties while she enjoys fireside chats on Zoom.

The first item on the agenda: repairing ­relations. All eyes will be on Harry and William this summer when they are scheduled to jointly unveil the sculpture of their mother that they commissioned. This is possibly the final irony — the spirit of Diana, who plunged the monarchy into crisis, could be the balm that heals a damaged institution.

Andrew Morton’s latest book, “Elizabeth and Margaret: The Intimate World of the Windsor Sisters” (Grand Central Publishing), is out now.