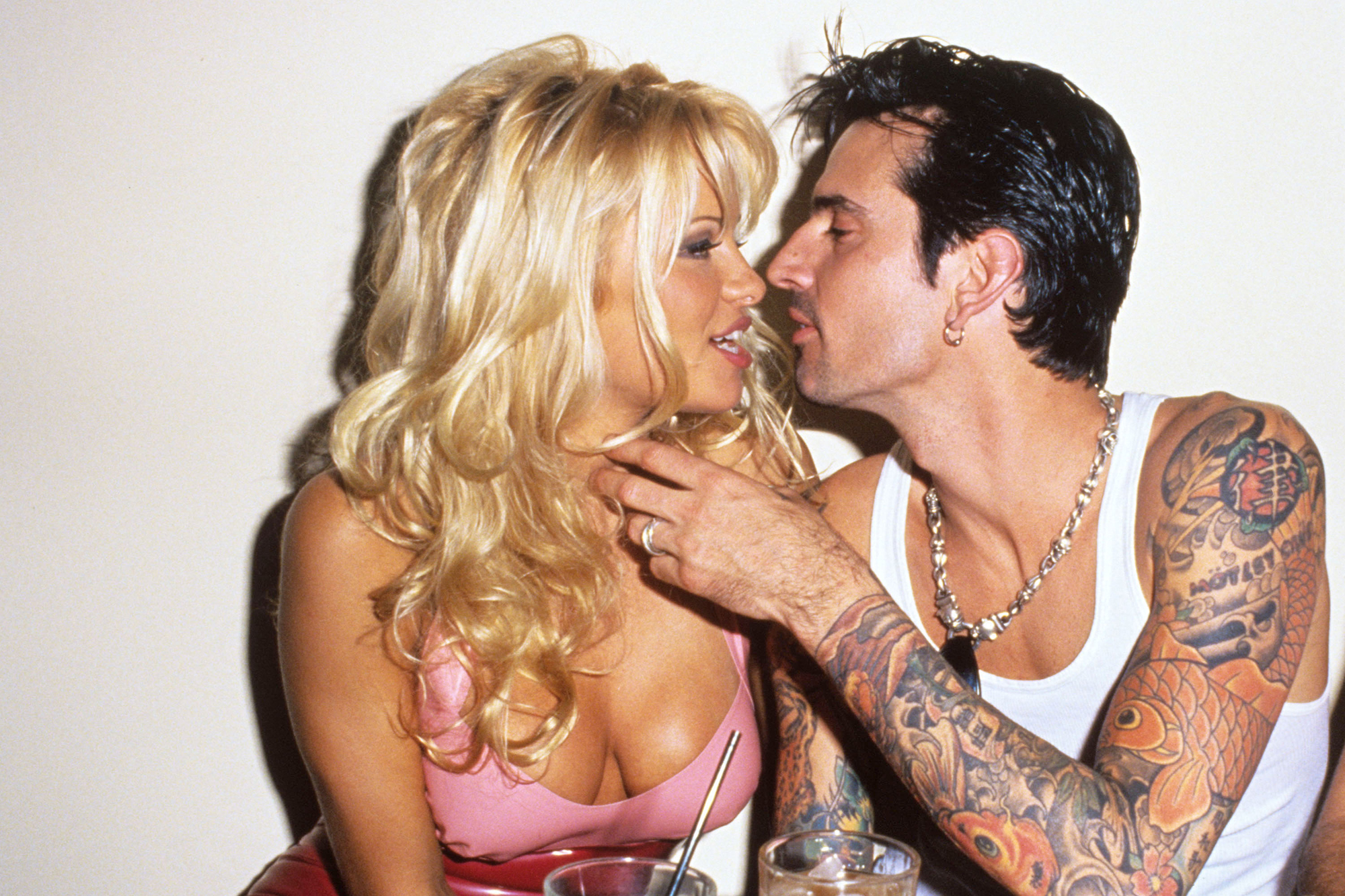 Back in the ’90s, Pamela Anderson reigned as Hollywood’s hottest chick — a Playboy cover girl turned “Baywatch” sex symbol. Tommy Lee, meanwhile, ruled as the baddest dude in rock ‘n’ roll: the Mötley Crüe drummer was known for bingeing on groupies, drugging heroically and swallowing small lightbulbs for kicks. With celebrities of the era zigzagging through LA’s elite nightclubs and boîtes, it was pretty much inevitable that their paths would collide.

They did — on New Year’s Eve in 1994 — at a Sunset Strip supper club called Sanctuary. The pair would meet up a second time — just six weeks later — and end up married.

Now, their salacious love story is getting made into a limited series. Hulu’s “Pam & Tommy” will star Lily James and Sebastian Stan as the star-crossed couple. Shooting is scheduled to begin this spring. Interest in the high-voltage saga has weathered time — Pam is now 53 and Tommy is 58 — better than the tattoos that cover Tommy’s body.

Their wild ride began, predictably enough, with Lee wasted. In the 2001 Mötley Crüe memoir “The Dirt,” Tommy recalled taking ecstasy on the fateful night in ’94. He augmented his pills with straight-from-the-bottle swigs of Cristal and downed the shot of Goldschläger sent over by Pam, who owned a small piece of Sanctuary.

Pam succumbed to Tommy’s charm offensive. “He came up, grabbed me and licked my face,” Anderson told me during an interview for Movieline magazine in 1995. “I thought he was a cool, friendly, nice guy. I gave him my number.”

A barrage of phone calls ensued. The intensity put off Pam, but, as reported in Rolling Stone in 2001, Tommy remained relentless. Finally, spurred to action by a message she left on the drummer’s answering machine, he picked up $400 worth of sex toys and costumes. He had high hopes for a spirited night.

They finally connected on the phone just as she prepared to leave town for a photo shoot in Cancún, Mexico. According to Pam, he responded, “ ‘You’re going without me?’ I begged him not to come down there. He said, ‘OK. See you later.’ I thought it was a weird way for the conversation to end.”

True to his word, Tommy flew to Cancún and tracked Pam to the Ritz-Carlton. That night, they got bombed at Señor Frog’s and bedded down in her hotel room. Within 96 hours, the smitten pair exchanged marriage vows on the beach.

After just a few nights together, Pamela Anderson and Tommy Lee wed on the beach in Cancun, Mexico in February 1995.Getty Images

Others commemorate landmark moments with professionally taken photos. Tommy and Pam had no time to arrange that. But, soon after tying the knot, they made a sex tape and took X-rated Polaroids. Both would come back to haunt them.

For the moment, however, they were happy newlyweds who saw no need for typical wedding bands. Instead, Pam sat for a tattoo, with the word “Tommy,” that encircled her left hand’s ring finger. “I don’t like jewelry,” she told me. “The size of the stone is really about the man’s ego over his little thing. I think diamonds have a direct relationship to your man’s penis size.”

Speaking of which, Lee got commemorative tattoos as well — on his finger and elsewhere. “I don’t know how that got out,” Anderson said. “There is a very select group of people who see his penis. But, yes, [a tattoo on Lee’s legendarily prodigious penis] says, ‘Pamela.’ ”

People in Pam’s camp may have been shocked by the impetuous nuptials, but they chalked it up to true romance. “I thought they were 100 percent madly in love,” an insider told The Post. “And Tommy was good for her. He knew the game a little more than Pam did. He had been famous since [1983, when Mötley Crüe first blew up] and helped her to navigate [that world].”

Plus, as a couple, they shared outré interests that went beyond, say, tennis or antiquing. “Tommy will have his friends over and I’ll get them to wear my rubber dresses,” Anderson said. “They were kickboxing in my bikinis once. When I bring a present home for Tommy, he’ll open the box and see that it contains high heels, size 10 1/2, men’s.”

And he’ll put them on? “Of course. Or else, if Tommy is in a bad mood, I go upstairs and come down wearing this 3-foot-high Mad Hatter hat. He looks at me and cracks up — because that is all I’ve got on.”

Sex games aside, fissures in the relationship formed quickly. Surely, things were not helped by Pam’s 1995 miscarriage, constant stalking from paparazzi and gossip about Tommy’s controlling nature. Rumors circulated about him keeping his wife contained in her trailer while she shot “Barb Wire” in 1995.

“Of course, Tommy and I had sex in the trailer on the movie-set — all the time,” she said. “But that was both of our choices. He didn’t keep me from the set.”

Nevertheless, a former lover of Pam’s told The Post, “Tommy never let anyone near Pamela.” Asked if he was insecure, the source responded, “Just smart. The whole world wanted to f - - k Pamela.”

Or at least glimpse her in the act. Explicit photos, swiped from the couple, made their way to French and Dutch editions of Penthouse magazine in ’95. “Those were good shots,” Anderson told me at the end of that year. “When I saw the first Polaroid, I was, like, ‘Whoa, baby. We should frame this.’ ”

A video containing around eight minutes of X-rated action circulated as well. Hollywood private eye Anthony Pellicano told The Post that Pamela and Tommy were less blasé about that exposure. “They were incredibly upset,” said Pellicano, who was hired to find the culprit and retrieve the tape. “They thought [the video] contained their private moments, and it most certainly did. Somebody had access to the safe [where the video was stored] and stole it.”

Pamela Anderson and Tommy Lee dressed up for the MTV Video Music Awards in New York City in 1999.Getty Images

As reported in a 2014 Rolling Stone story, the thief was allegedly a disgruntled electrician named Rand Gauthier — to be played by Seth Rogen in the series — and whispers of collusion added insult to injury. “They did not willfully participate,” the insider told The Post. “They had a huge refrigerator-sized safe, and somebody stole it. Privately, they were devastated.” A police report was filed, and a $10 million lawsuit was launched against Gauthier and others, but the couple couldn’t prevent its online distribution.

“Pam & Tommy Lee: Stolen Honeymoon” kicked off a craze for celebrity sex releases from the likes of Paris Hilton (in flagrante delicto with Rick Salomon, who was briefly married to Pam twice — in 2007 and again in 2014) and Kim Kardashian. Generating some $77 million in sales revenue, the tape was ultimately released by Vivid Entertainment after the couple signed away their copyright in 1997. They claim to have not profited from it. (Tommy Lee declined to be interviewed for this story, and Pam Anderson did not respond to requests.)

By this time, the pair were parenting two kids, Brandon and Dylan (born in 1996 and ’97, respectively), and juggling everyday familial stressors. “I’m sure that on some level the heightened sensibility [that they initially experienced] ended,” said the insider, noting that Anderson oversaw child care and eventually sent her sons to boarding school in Canada, the country where she grew up. “The kind of momentum that led them to get married in four days, it’s not sustainable.”

As Tommy later said, “When Dylan was born, I dropped down to No. 3. Now I was full-on nonexistent. And I couldn’t deal with that.”

In February 1998, Lee appeared in court after Anderson accused him of abuse. He pleaded no contest to a felony charge of spousal battery and was sentenced to six months in jail. Getty Images

In 1998, they had an altercation at home. It allegedly got physical. Pamela called the police. Tommy was led out in handcuffs.

He told Rolling Stone that his memory of the confrontation was delivering “a swift, slippered boot to the ass.” But Deputy District Attorney Kathryn Solorzano maintained that Pamela had bruises and a torn fingernail from the spat. Soon after, she filed for divorce. Tommy pleaded no contest to a felony charge of spousal battery. A judge sentenced him to six months in jail.

Outside of the Malibu Municipal Courthouse, Pamela told reporters, “I’m very proud of Tommy. I’m happy he took responsibility for this. And I think it’s the first step towards healing.”

Anderson said outside the courthouse that she was “happy that he took responsibility.”Getty Images

Pamela and the kids repaired to Paradise Cove, a luxurious trailer park on the Malibu beach front. Soon after, she embarked on well-publicized flings with surfer Kelly Slater and Swedish model Marcus Schenkenberg. “Tommy,” tattooed on her ring finger, was finessed to “Mommy.”

The artist Marilyn Minter photographed Pamela in 2006 and produced a series of stunning, emotionally revealing images. “She owned her sexual agency,” Minter told The Post. “Pam acknowledged that she made money by being a pin-up. I found that healthy.”

The session took place around the times of Anderson’s rumored involvement with Mark McGrath of Sugar Ray, racer Eddie Irvine and singer Ray J, who went on to star in Kardashian’s 2007 sex tape.

Pamela Anderson with sons Dylan and Brandon in 2016.FilmMagic

“She said something about having bad taste in men,” said Minter. “I thought she was pretty smart. She was single at the time and telling me how Tommy was such a terrible alcoholic [during their marriage]. That was why she had to end it. She said he was out of control, peeing in bed. I was sympathetic.”

Although she and Tommy got back together, a decade after breaking it off, in 2008, the reunion was short-lived. Ten years later, in 2018, after son Brandon (now 24 and working as an actor) knocked out his father in an altercation of their own, mama Pam posted to her website: “alcoholism is the devil.” She maintained that their son “punched him in the nose for all of us who he has hurt” and described her ex as “a disaster spinning out of control.”

Pam recently made waves with an unfruitful push for former President Trump to pardon Julian Assange and defended her “vegans make better lovers” tweet on Piers Morgan’s “Good Morning Britain.” Tommy, who’s been sober for more than a year, will be appearing in a horror movie called “The Retaliators,” and his third solo album, “Andro,” dropped last October. Riding above it all, though, is the legacy of their wild years together. As summed up by the insider, “They had a crazy relationship.”

NeNe Leakes Is Back On The ‘Gram And Fans Go Crazy With Excitement
Dale Moss Responds To Accusations He Regrets Getting Engaged To Clare Crawley And Other Rumors After Their Split – Video!
Comment