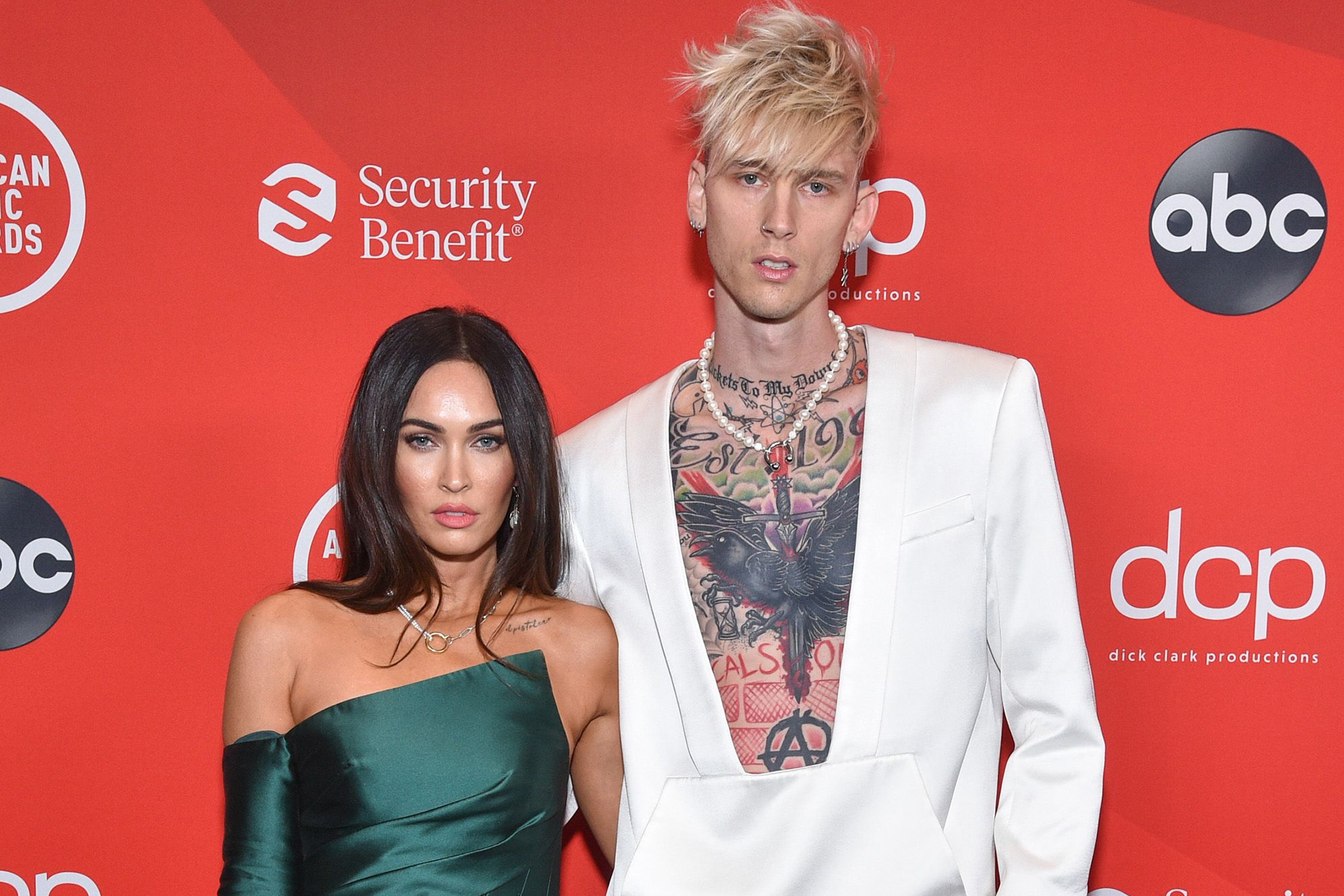 With A-list hosts, musicians and guests coming through “Saturday Night Live” every week, it takes a lot to impress workers at 30 Rock. But that’s just what Machine Gun Kelly — the rapper turned rocker playing the show for his first time Jan. 30 — managed to do.

“There aren’t many people here [because of COVID],” said a 30 Rock staffer, “and usually everyone is pretty blasé. But this guy caused a little bit of a stir.”

Indeed, few people are riding higher this week than the six-foot-four, ultra-tattooed Colson Baker — the 30-year-old star’s real name — who has walked the runway for John Varvatos and could be a model if he wasn’t busy with a No. 1 album (“Tickets to My Downfall,” his fifth LP), a hot acting career and just maybe putting a rock on girlfriend Megan Fox’s engagement finger. As Page Six reported, the actress was spotted in New York City on Thursday wearing a “huge sparkler.”

Baker looked at ease in Manhattan as paparazzi snapped photos of him and Fox outside 30 Rock — where he’s working this week with his close pal and “The Dirt” co-star Pete Davidson —  but then again he may be in no hurry to wed. Fox is still reportedly married to her husband of 10 years, “90210” actor Brian Austin Green, with whom she shares three sons, although she filed for divorce in November and has said they separated a year before.

She met Baker, who uses his real name when acting, on the set of the movie “Midnight in the Switchgrass” in March, and they’ve practically made a sport of Instagram PDA.

In August, she posted a  photo of herself and Baker, both scantily-clad, and captioned it: “Achingly beautiful boy … My heart is yours.”

Green fired back by posting a photo of his sons, with the seemingly mocking caption “Achingly beautiful boys … My heart is yours.”

Fox said of Baker on the “Give them Lala” podcast last year that she “knew right away that he was what I call a twin flame. Instead of a soul mate, a twin flame is actually where a soul has ascended into a high enough level that it can be split into two different bodies at the same time.”

Having a Hollywood sex symbol fawn over him didn’t seem in the cards for Baker, who came to fame around 2011 as an Eminem lite. Like the Detroit rapper, he told a back story about a hardscrabble life that inspired songs of vulnerability and depression as well as defiance and ambition.

Most interviews with Baker say that he was the son of missionaries who traveled the world when he was little and that he later moved to Denver and then the East Side of Cleveland where he wound up in the ghetto.

But his real background is murkier. His father, James Colson Baker, was a human resources executive with companies like Amoco, PepsiCo and Hewlett Packard during Baker’s childhood. James did work in Cairo briefly for Amoco but his missionary work does not seem to have happened until Baker was in high school.

Baker’s mother, Sonia Kjos Waring, is an epidemiologist with a doctorate in veterinary entomology but otherwise a mystery. Sources told The Post that she and Baker’s father had been living in Texas around 1998 when Baker was 8 and they decided to liquidate all their assets and go overseas as missionaries.

But at the airport, Baker’s mother refused to go and told her husband that she was leaving him for another man, who she later married, a relative told the Post.

It’s unclear if Baker had any relationship with his mother after that. Calls and emails to his mother and stepfather went unanswered. Both his maternal uncle and a man at his maternal grandmother’s house hung up the phone when the name “Colson Baker” was mentioned.

A rep for Baker did not return a request for comment.

Baker grew up with his father, with whom he had a troubled relationship.

“I came from a father who was extremely religious and extremely strict, and wouldn’t even let me hold my pen the way I wanted to hold my pen,” Baker has said. “That made me rebel completely, and cut off communication completely, because I didn’t want to have any common ground with him.”

Elizabeth Brandl, a teacher in Illinois who worked with James Colson Baker and stayed friends with him, recalled him as “the perfect executive, with a smile that would knock out the sun.

But then the next day you’d run into him and it was like he was just crumbling,” Brandl told The Post. “He had zero self-confidence. He came from a tiny farming community and he could have gone so far. He  talked about marrying this fabulous girl. Then she left him and broke his heart.”

James, who had studied theology, grew more religious after his wife left, Brandl said. He and his son clashed so much that Baker often left home, “living hand to mouth and with friends,” she said.

Brandl said James was upset about his son’s lifestyle but “always loved him,” she said.

Earning the nickname Machine Gun Kelly for his rapid-fire rap style, Baker released his first mix tape in 2006. In 2009, he won amateur night at Harlem’s Apollo — the first rapper to do so.

From there, he was discovered by Sean “Diddy” Combs and Jimmy Iovine, who signed Baker to Interscope Records.

In 2011, Baker gained prominence with a mixtape titled “Lace Up” which has, among fans, become a movement that means getting ready, showing up, no matter what happens. For Baker, that ethos kicked in when he became a parent at just 18, as his high-school girlfriend Emma gave birth to their daughter Casie — now 12, and her father’s frequent travel companion.

Fans online wax rhapsodically about how Machine Gun Kelly’s songs about trying to overcome substance abuse  — he’s spoken about being addicted to Adderall —  and sometimes suicidal despair has helped them.

Baker famously beefed with Eminem in what many say was a PR stunt that helped the younger rapper. In 2012, Baker tweeted that Eminem’s then-16-year-old daughter Hailie was “hot as f—k.” In 2018 Eminem dropped a devastating diss track, “Not Alike.” Baker followed with his own response, “Rap Devil” after which Eminem owned him with “Killshot.”

“MGK is pretty brilliant,” a music manager, who has observed him since his early days in Cleveland, told The Post.

“He dreamed of making it big and he started to get there by being a rapper. He said, who’s the giant in this game. I’m going to poke that bear so much until I get a reaction and I get noticed. It worked.  Eminem noticed and he reacted … But I don’t think rap was [Baker’s] endgame. He’s living his real dream now. The hot girlfriend, the acting career. He got his success by using psychology as well as his talent.”

Indeed, Baker has gone from playing a rapper in the 2014 film “Beyond the Lights” to roles in “Bird Box,” the Showtime series “Roadies” and “Big Time Adolescence” and “The King of Staten Island” — the latter two movies with his close friend, Pete Davidson.

Despite the rocky relationship with his father, when James became ill in 2019, Baker tweeted: “I should’ve told him that I loved him years ago. Breaks my f—in heart that we wasted all this time.” After James passed away in July, Baker tweeted that he’d “never felt a pain this deep in my life.”

A few days before his SNL debut, Baker recalled his late dad.

“I remember when I was a kid watching SNL every weekend with my aunt and my dad,” he tweeted. “Since they aren’t here to see this moment, I’m going to perform the song I wrote for them, on the show. Hopefully I’ll feel them there.”