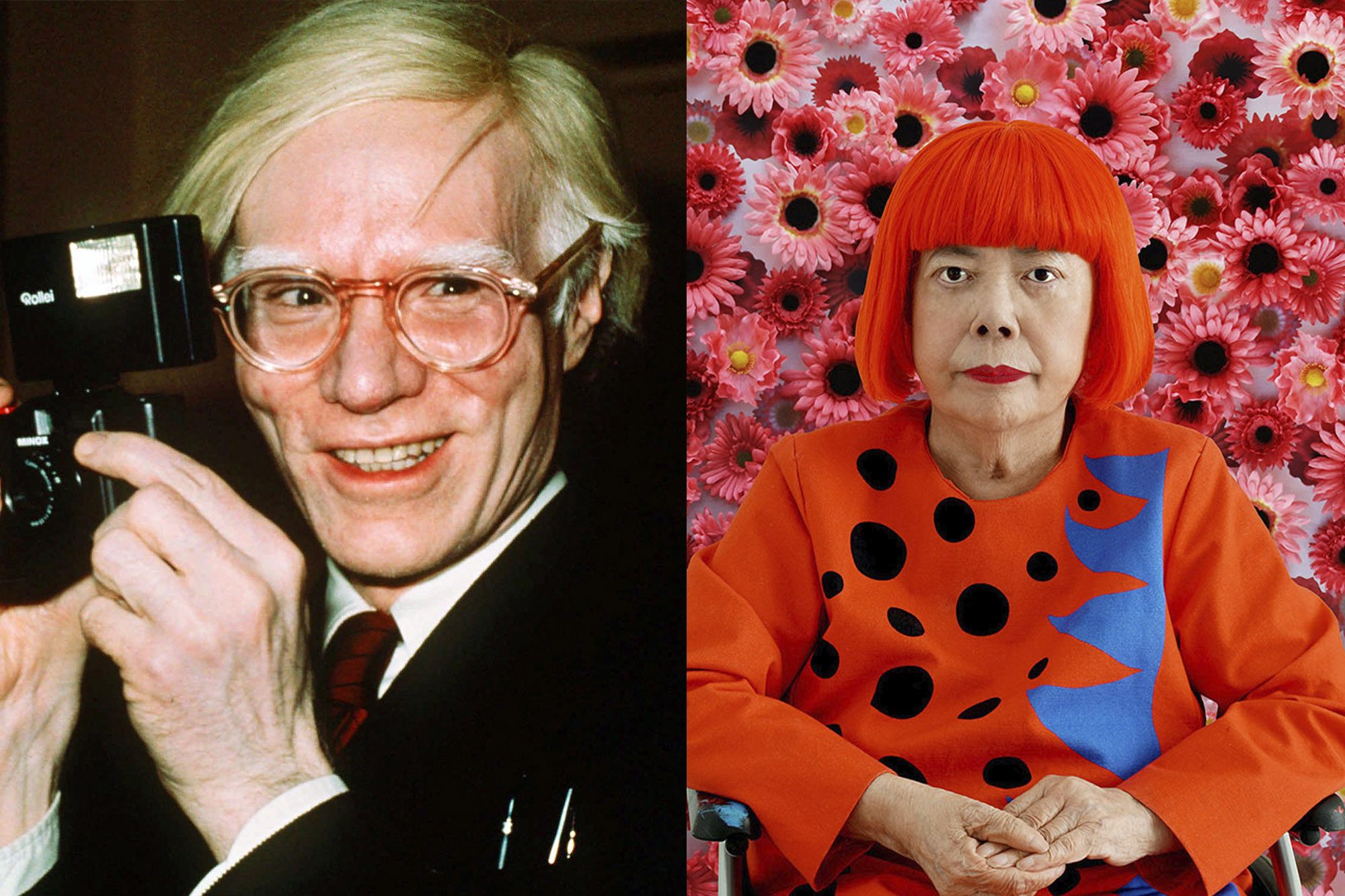 In 2019, New Yorkers waited in line for hours to see Yayoi Kusama’s show at the David Zwirner gallery in Chelsea — eager to get the Instagram selfie of the moment, posing inside the artist’s famed mirror rooms or with one of her dotted pumpkin sculptures.

But when Kusama first came to New York City in 1958, she struggled to draw crowds.

During her 15 years here, she made some of the work that she’s famous for today, like the Infinity Net paintings that go for as much as $8 million. Early on, Kusama begged galleries to show her work. Most declined.

She believed that male peers — including Andy Warhol, whom she called a “close friend” — were copying her work.

It all led to a suicide attempt.

“Kusama faced terrible prejudice in the art world,” her old friend Hanford Yang, an architect and longtime Pratt professor, told The Post. “She was so good, but none of the big galleries would show her because, one, she was Japanese, and, two, she was a woman . . . She struggled in New York. She had no money. I used to see her cry.”

Born in 1929 in Matsumoto, Japan, Kusama grew up on a seed farm that had been in her family for a century. She spent her childhood immersed in flower fields, which, she says in the documentary “Kusama: Infinity,” is where she first had hallucinations — including “talking” violets — that would inspire her art.

Some of the artists that Kusama believed copied her work:

Kusama said in the film that her parents had an unhappy marriage, and she was tasked with spying on her father, who had a roving eye. Witnessing him in a “sex act” led to a lifelong fear of sex. She said she sees her art as a way to work through the trauma.

She briefly attended the Kyoto School of Arts and Crafts and wrote a fan letter to Georgia O’Keeffe, who became, Kusama has said, her “first and greatest benefactor.”Eager to come to the US and be an artist, Kusama landed in Seattle, then New York, at age 27, just 13 years after World War II.

“This was a time when Japan was still in the minds of many in the US as an enemy,” said Alexandra Munroe, senior curator of Asian Art at The Guggenheim. “And we know America can be a racist country. Animosity towards Asians has been an integral part of social and political reality for centuries. It must have been very difficult for her.”

In her autobiography, Kusama describes her early Manhattan apartments as “hell on earth.” She used a door found on the street for a bed and ate “from the fishmonger’s rubbish.” She painted all night to stay warm because she had no heat.And she was “aggressive” when pushing her art, Yang said.Kusama has described carrying a canvas “taller than myself” 40 blocks to the Whitney for consideration, only to be rejected. She went to parties looking for patrons, crashed events and made friends with contemporaries like Warhol and Donald Judd. When O’Keeffe visited New York, she introduced Kusama to art dealers.

Kusama poses on the Brooklyn Bridge in 1968. Getty Images

Yang credits Judd for introducing him to Kusama at Judd’s apartment on Park Avenue South and 19th Street.

“He said he wanted to introduce me to a ‘wonderful artist who will be a great artist in the future,’” Yang said. “And that was Kusama!”

Her first solo show, in October 1959, was at a gallery started by artists. Judd glowingly reviewed it for ARTNews and bought one of the pieces for $200. The support of a well-respected male peer went a long way.

In 1962, Kusama began showing soft-sculpture pieces, covering sofas and ironing boards with hand-sewn phallic forms. “Nobody was doing soft sculpture,” she says in the documentary. Later that year, her peer Claes Oldenburg debuted soft sculptures. Kusama felt he had stolen the idea. “His wife pulled me aside and said, ‘Yayoi, forgive us,’ ” Kusama has claimed.

In 1963, she landed a solo show at Gertrude Stein Gallery, her first-ever installation. “Aggregation: One Thousand Boats Show” showcased a boat covered with soft phallic forms; she also wallpapered the space with repetitive images of the boat. In her autobiography, she wrote that when Warhol, her “close friend” and “rival,” came to see the show he shouted “Yayoi, what is this? It’s fantastic!” A few years later, when Warhol plastered the walls and ceiling at the famed Leo Castelli Gallery with repetitive cow wallpaper, Kusama was crushed.“She was very upset,” Yang said. “It was very similar . . . and nobody gave Kusama any credit.”

In 1965, Kusama debuted her first-ever mirror room at the small Castellane Gallery, which tried and failed to sell the piece for $5,000. (They now go for about $2 million apiece.) Months later, Lucas Samaras, an artist whose work is now in the Whitney’s permanent collection, debuted a mirror room at the more established Pace Gallery.

According to the documentary, that was the final straw. Driven to suicide, Kusama jumped out a window — but landed on a bicycle and survived. Fed up with feeling ripped off, she covered the windows of her Greenwich Village studio to prevent other artists seeing and copying her ideas.

In the late ’60s and early ’70s, Kusama began staging naked “Happenings,” where she painted nude volunteers, and took part in naked political protests against the Vietnam War. By this time, her work was now being shown around Europe, and she was a known name in the New York art scene, but monetary success was still fleeting.Although she never married or had children, she did have relationships, including with the famed artist Joseph Cornell. The pair were a good match, Kusama has said, because they both “didn’t like sex.”

Kusama (pictured above in 1967) says she struggled in her early Manhattan days.Getty Images

But in 1972, he passed away from apparent heart failure. The next year, disgruntled by the city’s art scene and the white men who controlled it, and sinking deeper into depression, Kusama head back to Japan and eventually checked herself into Seiwa Hospital, a mental institution, where she still lives.

Now, she says in the film, “I want to live forever.”

She kept creating, but New York City forgot her. Then a ­curator tracked her down.

“I kept hearing about Kusama from all of the Japanese artists who were in New York,” Munroe told The Post. “They all kept asking, ‘Where can I see Kusama? Why no Kusama?’ . . . But there were no books about her in English. She wasn’t in any of the top galleries. It was like the world had forgotten about her.”

In 1989, when Kusama was 60, Munroe curated “Yayoi Kusama: A Retrospective” at the Center for International Contemporary Arts in Manhattan, which helped relaunch her on the international stage. It also marked Kusama’s first return to NYC in 17 years.

A few years later, in 1993, Kusama represented Japan at the Venice Biennale. In 1998, “Love Forever: Yayoi Kusama, 1958-1968,” which highlighted Kusama’s New York years, debuted at the MoMA.Now, with her shows selling out around the globe, she’s the most famous and successful living female artist in the world. According to ARTnews, Kusama’s auction sales have increased more than tenfold, from $9.3 million in 2009 to $98 million in 2019.Some of her early New York art — three paintings and eight works on paper — will be on display for the first time at Bonhams New York on May 12. The auction house is hosting the sale of the collection of the late Dr. Teruo Hirose, Kusama’s personal doctor, and longtime friend. In a statement, Bonhams says this is the “rarest group of Kusama works from the late 1950s and 1960 to ever come to auction.”Kusama still paints daily from her studio, which is a short stroll from the institution.Munroe said she’s not surprised by Kusama’s success.

“A great artist is someone who changes the way we think and Kusama is that,” Munroe said. “She wanted to change the world [and] she has.”

Saweetie Responds To Criticism About Using Samples In Her Music
Michael Rapaport on his famous feuds with Kevin Durant, Barstool Sports & more
Comment