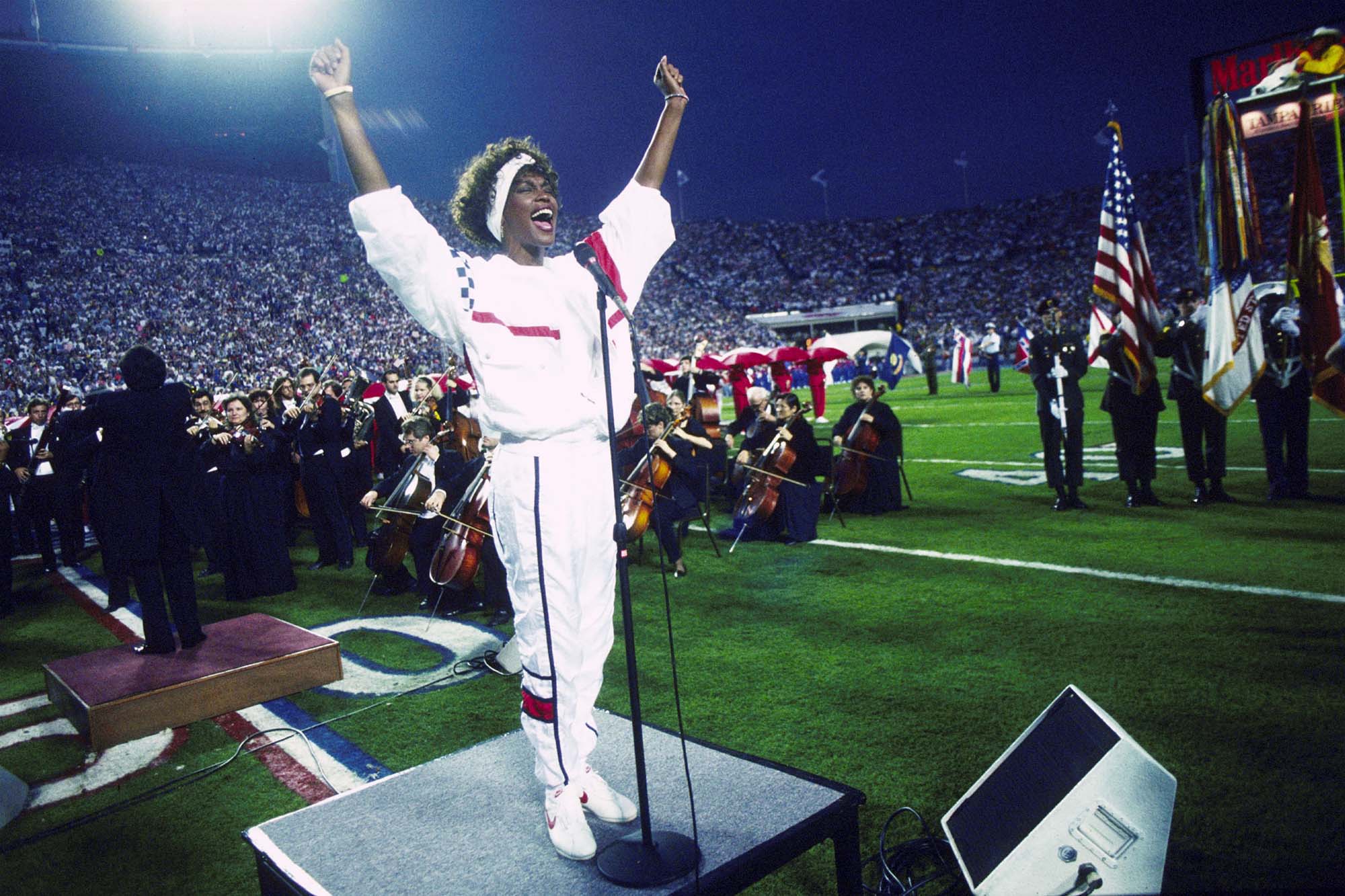 And singing what is widely considered the greatest national anthem rendition of all — at the Super Bowl 30 years ago on Jan. 27, 1991 — Whitney Houston was inspired by another music legend.

“She said, ‘You know, Marvin Gaye did it at the [1983 NBA] All-Star Game, and I really loved how he was able to take his time. Can we do something like that, where we let the words kind of linger?’ ” Rickey Minor, Houston’s longtime musical director, told The Post. “So we added a beat to each bar. That alone was sacrilegious to change the national anthem!”

Although Minor, now 61, “was almost fired” by NFL executives for shaking up “The Star-Spangled Banner,” Houston’s rampart-bursting rendition at Super Bowl XXV in Tampa, Florida —  the Tampa Bay Buccaneers will tackle the Kansas City Chiefs there for the championship Feb. 7 — changed the game.

“We wanted it to feel like Whitney,” said Minor, who also served as musical director of the “Celebrating America” inauguration night special last week. “So the orchestrator, John Clayton, did an arrangement [where] we added some gospel chords and some jazz chords. So now, we’re not only changing the time but we’re changing the harmonic structure of the song, which is a huge risk. I wanted to make sure that, musically, it gave her places to go.”

Minor went to Tampa to work out the arrangement with the Florida orchestra. Then, he sent Houston the music before meeting her in Los Angeles to lay down the prerecorded “safety” track that is required for the Super Bowl.

“When she arrived at the studio, I ran outside to meet her at the car like, ‘What do you think?’ ” said Minor. “And she said, ‘I haven’t had a chance to listen to it yet. I just came from doing a screen test for this movie with Kevin Costner called “The Bodyguard.” I think it went well.’ And so here she is so relaxed about it.

“I played it for her, she listened to it one time, and then she said, ‘OK, I got it!’ And she walked into the booth, and I would say 90 percent of what you heard is that first take,” said Minor, who only had her do one more take.

‘I don’t think anyone was ready for the impact.’Rickey Minor, Houston’s longtime musical director

When it comes to singing the national anthem at the big game, though, “it’s up to the artist whether they want to sing live or sing to the track or however they wanna do it,” said Minor.

Ultimately — because of the cold, damp conditions and technical concerns — they went with the prerecorded track. “She sang live on the field, but I used the vocal that she sang in the studio,” explained Minor. “I just didn’t turn on the mike, so when you see her veins moving, she was singing.”

In the midst of the Persian Gulf War, Houston’s “Star-Spangled” moment struck a patriotic chord both at Tampa Stadium and around the country. “Everyone was just fired up to hear the national anthem,” said Minor, noting that Houston also recorded a version of “America the Beautiful” that was played at the stadium but didn’t air on television.

As for the iconic white tracksuit with red and blue stripes — plus matching headband — that Houston wore, Minor said, “She was like, ‘I wanna be able to go to my seat and just enjoy the game.’ And she said, ‘My Giants are gonna win too, just so you know!’ ” (Indeed, the New York Giants squeaked out a victory over the Buffalo Bills, 20-19.)

Two weeks later, Houston’s instant-classic performance was dropped as a charity single and, when it was re-released in 2001 following the 9/11 attacks, it hit the Top 10 of the Billboard Hot 100.

“I don’t think anyone was ready for the impact,” said Minor, who has been the musical director for other Super Bowl national anthem singers, including Faith Hill (2000), the Backstreet Boys (2001) and, most recently, Gladys Knight (2019). “The stars have to align for things like this to happen.”

But, he added, “I have to be honest that when Whitney opened her mouth, I expected magic.”

Vivica A. Fox Has Something To Say About Dani Leigh’s Latest Music Release
Diddy’s Latest Throwback Pics Have Fans In Awe – See Them Here
Comment