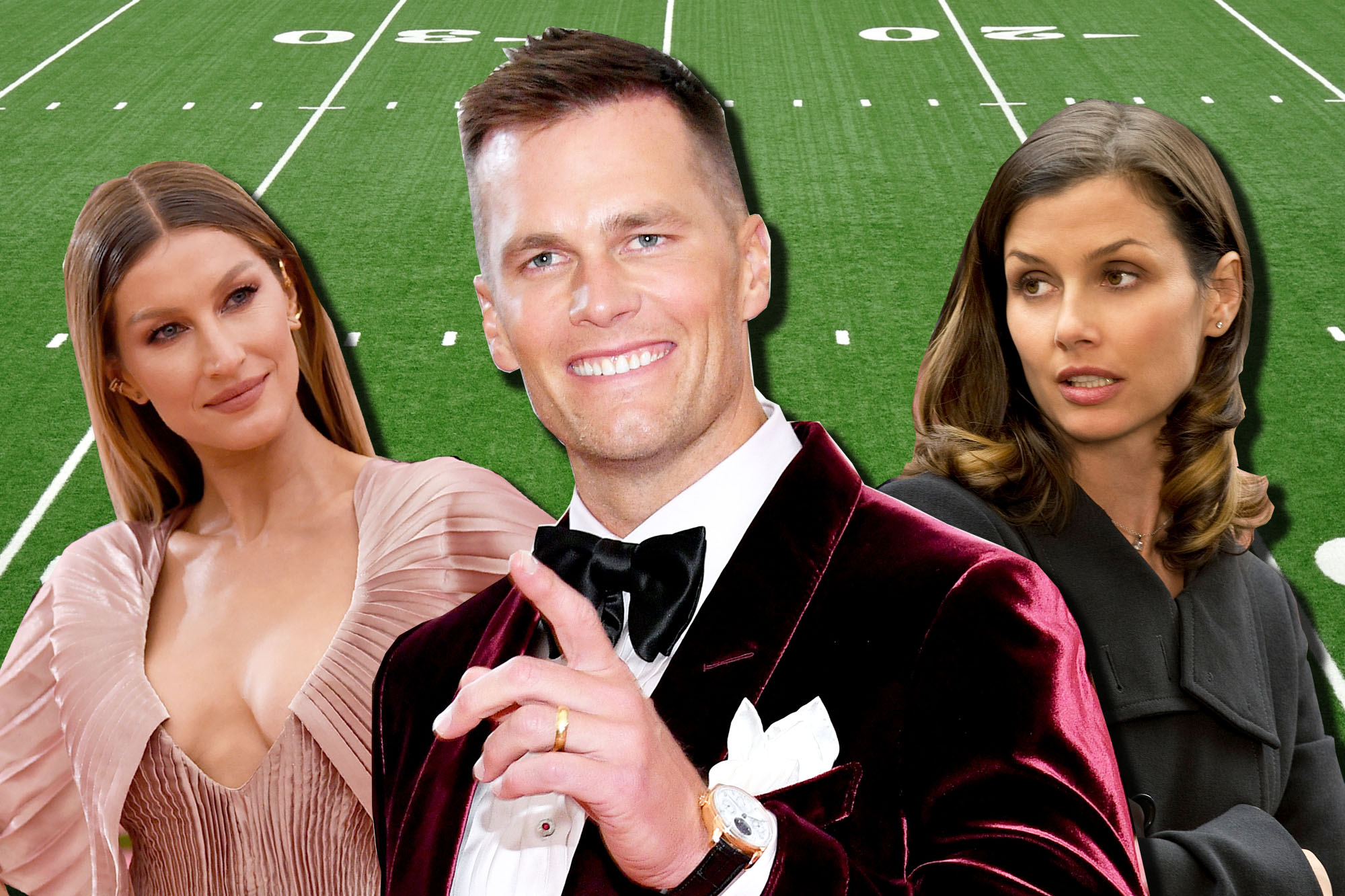 The minute last Sunday that Tom Brady clinched his  record 10th spot in a Super Bowl, there was just one person he wanted to see.

After his Tampa Bay Buccaneers’ NFC Championship victory over the Green Bay Packers, the 43-year-old future Hall of Fame quarterback rushed to the stands for a hug from his 13-year-old son, Jack.

“Can I say hi to my son?” asked Brady, who climbed the barrier to embrace his oldest boy — already gaining on  him in height — and tell him, “Love you, kiddo.”

Friends of the multimillionaire quarterback told The Post that Jack is Brady’s Mini-Me.

Added one: “He has got his dad’s long legs and he’s really talented. I don’t know if he’ll be a professional footballer player, because can you imagine the pressure that comes with being Tom Brady’s son?”

After the post-game moment, Brady talked to Westwood One Radio about Jack: “Oh man, he’s such a trooper. A good friend of mine, my friend Tom Wagner, was flying to the game and he said, ‘I wonder if Jack can come? We’ll be in and out the same day.’ And Jack was all in. He came and watched, sitting out in the freezing cold and was just so happy at the end …

“He’s a special kid. I love my family. Obviously, I love my team, and there’s just no greater feeling than to spend those moments with all of us together after a great win.”Jack’s mom, actress Bridget Moynahan, seemed equally excited. “Could not be more proud @tombrady said he would do it and he did. Congratulations @buccaneers,” she posted on Instagram.

There was a time when such camaraderie and support seemed unthinkable. Her followers certainly knew that, too.

“So awesome to watch you both navigate your lives in such a supportive, respectful way! High praise! Can’t be easy living in the spotlight,” one wrote. “You’re a great role model for kindness and forgiveness,” posted another. As nearly 30,000 “likes” ticked up, one person added: “Have not been a Tom Brady fan because of how he treated you in the past. If you can cheer for him today, I can too. It was a great win!”

Moynahan, now 49, found out she was pregnant with John “Jack” Edward in February 2007 — just two months after she split from Brady, whom she had dated for two years. Making things even more dramatic, the athlete had just started dating his now-wife, supermodel Gisele Bündchen.

Although Brady has been there for Jack from day one, that doesn’t mean it was easy for the ex couple. Moynahan has said: “He was there on that day and came in afterwards. He certainly wasn’t holding my hand while I pushed.”

Brady told Howard Stern that, “It was very hard for [Bündchen] to think she fell in love with this guy, and now this guy’s ex-girlfriend’s pregnant. And it was very challenging for my son’s mom because she didn’t envision that either.”

As for Bündchen, in 2015 she told “CBS This Morning”: “I felt like I didn’t know what to do. It was one of those moments where like, do I run away? Now, eight years later, I couldn’t have asked for a sweeter bonus child.”

She also got an unexpected bonus relationship out of the deal. “Gisele and Bridget now actually talk as much as Tom and Bridget, if not more,” said a friend who knows the family.

“Tom and I made a decision to raise a child together and we both found partners that not only supported us in raising that child, but also loved our child as if he was their own,” Moynahan told People. “I don’t think you can ask for more than that. My son is surrounded by love.”

Brady married Bündchen in 2009 and they went on to have son Benjamin, now 11, and  daughter Vivian, 8, who are very close to their half-brother. Moyahan wed investment banker Andrew Frankel  in 2015 (Brady and Bündchen were not in attendance), and the couple split their time between Tribeca and Shelter Island.

“I’m glad she got her happy ending with Andrew. I’ve spent time with them — he’s not part of the ‘scene,’ he’s not a celebrity, he’s super down to earth. They’re a sweet couple,” a Moynahan friend told The Post.

There were no formal court proceedings after Jack’s birth, but any custody and financial support agreements that Brady and Moynahan have were done “privately and respectfully.”

With an estimated $200 million fortune, Brady has more than enough  for his son’s upbringing. As Page Six reported, the athlete and supermodel recently splashed out more than $17 million for a property on Miami’s private Indian Creek Island  — nicknamed “Billionaire’s Bunker.”

Brady and Bündchen reportedly plan to build something that meets their dream of sustainable living, and he has already been spotted visiting the property by boat with his architect.

“They like things just so, every toilet has to be perfect, everything has to be sustainable and organic,” a friend said. “Sustainability is Gisele’s passion.”

Sources said the two are searching for a new home in Los Angeles, and they still have a place in Tribeca — to be close to Jack.

In 2014, Moynahan splashed out $4.6 million on a loft in Tribeca. Jack attends the Upper East Side private school Saint David’s, where, The Post reported in 2018, Brady was auctioned for lunch. Pre-COVID, he was seen playing football with Jack and pals in the schoolyard.

Gisele and Bridget… talk as much as Tom and Bridget, if not more.Friend who knows the Brady family

Sources who know Brady say he’s also not a fan of socializing with celebrities. One NY socialite recalled how Patriots owner Bob Kraft  “brought Tom to a very smart dinner in the city a few years ago, where Elton John was performing, and he looked super awkward.”

He’s more comfortable at home, where Bündchen is said to rule the roost.

Brady has said that his wife once wrote him a “heartfelt letter” when she felt dissatisfied in the marriage, telling Howard Stern: “She felt like I would play football all season and she would take care of the house. And all the sudden when the season would end, I would be like, ‘Great, let me get into all my other business activities. Let me get into my football training.

“They’re going to be their own selves, not who you want them to be,” Brady told Men’s Health. “… [Jack] wants to try hard, and he never wants to disappoint his dad. That was me. I’d wake up early on weekends to do stuff with my dad. That’s why I didn’t party a lot.”

Preparing for retirement, Brady co-founded his own company, TB12, in 2013 with his trainer Alex Guerrero, with two performance facilities in Boston and one in Tampa and a best-selling nutrition and fitness book, “The TB12 Method.” He’s now developing it into a full-blown health and wellness brand. The pair have plans to open gyms across the country, The Post is told, but those were delayed because of the pandemic.

On Feb. 7, the Buccaneers will play the Kansas City Chiefs in Super Bowl 2021  at Raymond James Stadium in Tampa Bay, Fla. — the Bucs’ first time in the championship since 2002. Whether the Brady bunch will be on hand remains to be seen amid the pandemic. Normally, the family would be there.

“There were obviously challenges when Gisele had just met Tom, but Jack made their family blended and it’s about family and nothing else matters, they make it work because of their love for Jack and the kids,” said the  source who knows the family. “They’re a true, modern blended family.”