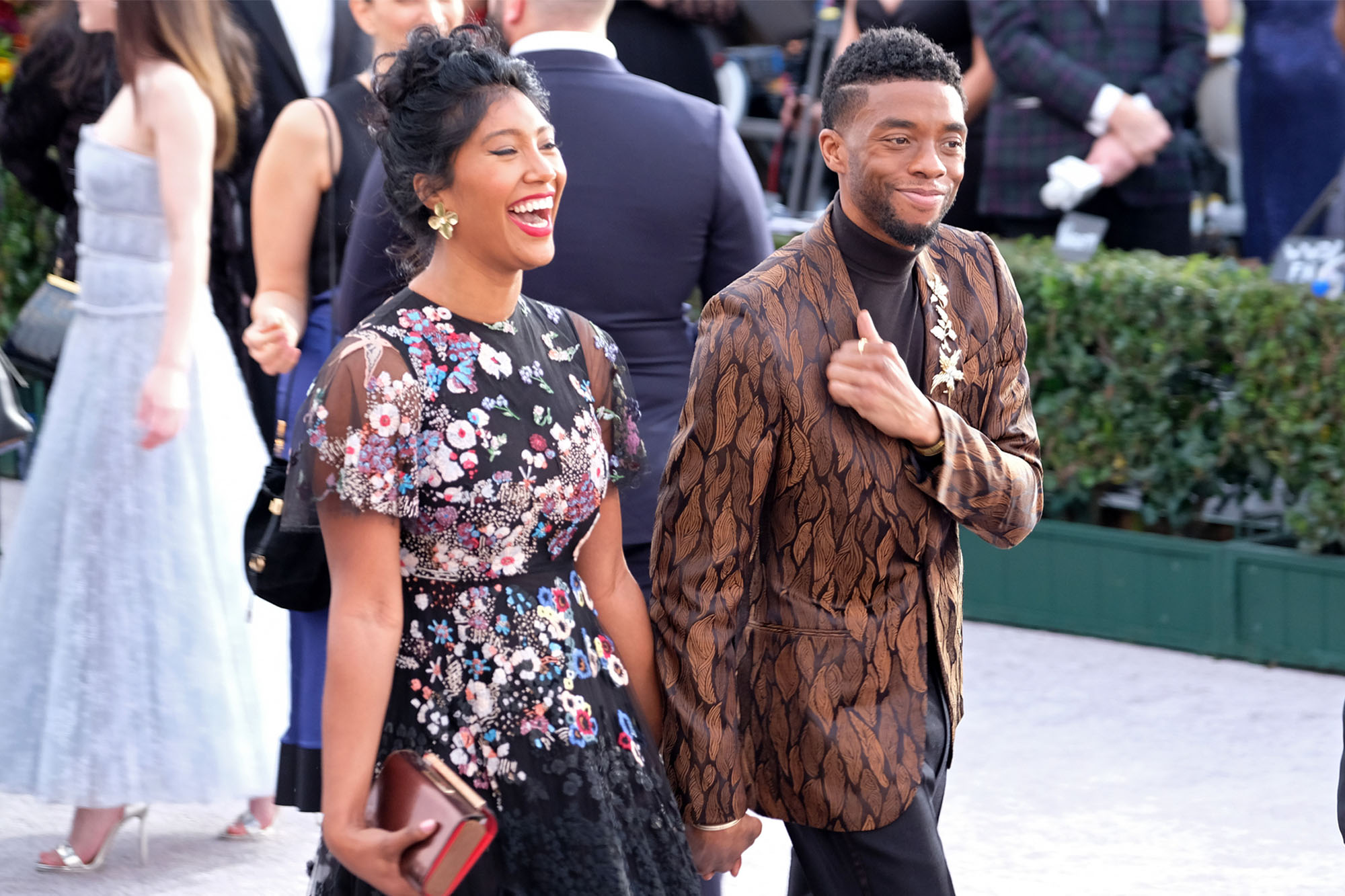 When Simone Ledward accepted the Outstanding Actor honor for her late husband, Chadwick Boseman, at the NAACP Image Awards in March, the crew was stunned into silence.

“Sometimes in the control room, you talk during the speech and sometimes you don’t. This time we didn’t. We leaned into the screen. It was very emotional,” Tony McCuin, the show’s live television director, told The Post.

“Normally, you’re looking at 30 to 45 seconds … before you cut the person off. We made the decision to let her go. She went for two minutes. She spoke to every black man, telling him to get his [colon] checked. It was about keeping black women from going through what she went through,” he said.

Boseman died of colon cancer, at age 43, in August of 2020. “If you are 45 years of age or older, please get screened,” Ledward, 30, said in the speech, her voice cracking.Even when she was finished, the director couldn’t bear to look away.

“Usually as soon as the speech ends, we [move on],” McCuin added. “I needed to … stay with Simone for an extra few seconds. I wanted to see her face one last time.

When the Oscars are presented on Sun., April 25, Ledward will wrap up her role standing in for her husband —  favored to win Best Actor for “Ma Rainey’s Black Bottom” — this awards season. It’s been magical, and heartbreaking, as Boseman has received multiple trophies for his roles in two movies: “Ma Rainey’s” (Golden Globe, Critics’ Choice, Screen Actor’s Guild and others) and a supporting part in “Da 5 Bloods” (NAACP Image, New York Film Critic’s Circle and more).

Ledward’s moving acceptance speeches have been a highlight.

When Boseman won a Golden Globe in February, she was tearful as she spoke via Zoom. “He would say something beautiful,” she said, as presenter Renée Zellweger cried onstage. “Something inspiring. Something that would amplify that little voice inside all of us that tells you you can. That tells you to keep going.”

“It all came from her heart,” he said of the NAACP speech. “I didn’t think she had anything written.”

Boseman and Ledward were first spotted together in 2015. By that point, the South Carolina-born actor was a star, having landed his breakthrough as Jackie Robinson in 2013’s “42” and wowed audiences as James Brown in “Get On Up.”

Ledward had graduated from Cal Polytechnic University in Pomona, Calif., in 2014, where she majored in music industry studies and was lead singer of the school jazz band.

The couple were very private, although occasionally seen on dates to NBA games and red-carpet events.

The last time they were at a big awards show together, it was the 2019 Oscars for “Black Panther,” the film that defines Boseman’s legacy. With his best girl resting her head on his shoulder, the actor looked on top of the world as the film scooped up three Academy Awards.

Secretly, however, he had been battling colon cancer since 2016, and many of his coworkers had no idea.

Ledward was a constant presence by Boseman’s side on the set of “Ma Rainey,” where only a very small trusted group knew that he was sick.

Co-star Glynn Turman, who  knew nothing of the illness, told The Post: “I absolutely felt their love.”

He recalled how Boseman teased Ledward, particularly about her clumsiness, like when she tripped while being introduced to Turman. “They would joke and kid around … She was in on it and she took it in great stride and knew it was playful, as it was meant to be.”

“Ma Rainey” producer Denzel Washington told CBS “This Morning” how he urged Boseman “to put a ring” on Ledward’s finger “’cause she kept her eye on him and she watched him.”

Turman agreed: “We said he had to marry her … We could all see that they cared deeply for one another. It was wonderful to watch their love affair. Chadwick had a team of people he worked with who took good care of him … we had no idea what they were doing and why. They were all led by Simone.”

The couple reportedly got engaged in October 2019, and Ledward showed off her ring at a Lakers-Clippers basketball game.

The marriage was only made public with the news of  Boseman’s passing, in a statement that said he died at home with his wife and family by his side.

Simone Ledward’s Golden Globes speech, accepting her late husband’s award for Best Actor in a Drama for “Ma Rainey’s Black Bottom”, was a teary, heartfelt tribute that brought many, including presenter Renée Zellweger, to tears. via Reuters

Boseman rarely spoke about his private life. But when he won best film actor at the 2019 NAACP Image Awards, for “Black Panther,” he praised Ledward.

“Simone, you’re with me every day. I have to acknowledge you right now. Love you,” he said, as she mouthed back : “I love you.”

Boseman’s death came as a shock to his fans as well as those who knew him. “We were all flabbergasted at the strength and dedication and sheer will he had [on ‘Ma Rainey’s’],” Turman, who had hoped to work with Boseman on a Western, said in hindsight.

Entertainment journalist Tanesha Laverne Grant recalled how Ledward watched over Boseman at the NAACP Image Awards in 2019 as she talked to them both, saying: “She looked at me and said ‘I gotta get Chad home.’ I’m thinking, of course he’s tired, it’s awards season.

“Chad amplified the beauty of humanity and brilliance of black culture with every breath he took … It was my pleasure as an African-American journalist to have shared in a moment where I had the opportunity to interview him .. I hope he takes the Oscar home.”

For some of Boseman’s closest friends, the devastation of losing him has made this awards season nearly unbearable.

“This awards season has been torturous. I managed to watch five minutes of the Globes when they announced his win, and only a portion of Simone’s speech,” Richards told The Post. “I burst into tears and turned off the TV.

“Many people think that we were just his team, he was just a ‘client.’ This is not so. We are family … “

She added: “Since Chad’s passing, Dede and I have been dragged through the awards system mill ourselves for ‘Ma Rainey’ makeup and hair nominations … The effort it took for the both of us to even begin to wrap our head about talking hair and makeup for our Chadwick was nearly impossible …

“It’s been like drowning … during awards season. Some days you manage to get your nose above water and breathe, only to have another email arrive or phone ring, pushing us back under.”

Part of the pain, she added, is knowing what Ledward is going through herself.

“To hear Simone’s speeches is not something any of us is really able to do other than in snippets — and very much after the event, if at all,” Richards said.

She and the others do not plan to watch the Academy Awards.

“He’s going to win the Oscar. We told him all through shooting ‘Ma Rainey’ that he would bring home gold again and again,  only we never thought he wouldn’t be here to receive it personally,” Richards added.

“Chad never did it for the awards, he did it for God and for the people. The hearts that he has won all over the world by telling the stories he told is worth more than the gold statue he will win that was voted on by a select and privileged few.

“However, he would have relished the moment in true Chad style,” she continued. “We know he would have had his billion-kilowatt smile full blast as he received it, that he would have looked so, so handsome, and that his words would have [been] poignant …

“Although we love Simone and are so proud of her handling all those speeches at this time, we cannot bring ourselves to listen to a speech  … on Chad’s behalf again. It’s just too much too soon.”

It came from her heart. I didn’t think she had anything written.Tony McCuin on Simone Ledward’s speech honoring her tragic husband, Chadwick Boseman

Turman plans to watch the Oscars at home, and  cheer on Boseman — and Ledward. “It will be wonderful and well deserved,” he said of the predicted win. “My main thing is that the public should know I feel that he deserved it for his performance … not [because we] lost him so soon.”