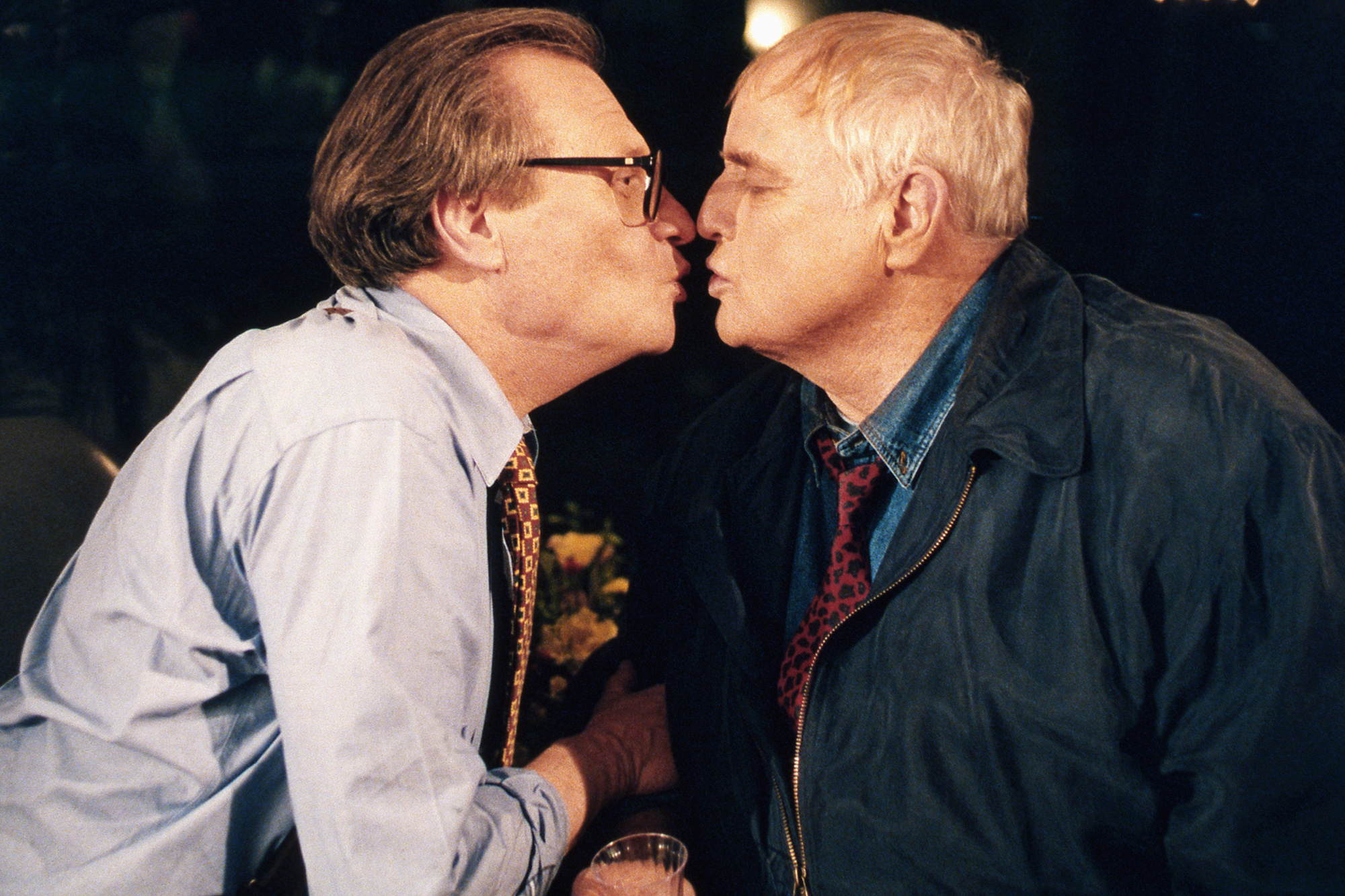 Larry King conducted more than 50,000 interviews during his storied career. Here are some of his most memorable:

King called his 1988 sitdown with the iconic crooner one of his favorites. During the segment, the mighty Sinatra called writers of kiss-and-tell books “pimps and whores” and he confided that he never got over his stage fright. “I swear on my mother’s soul,” Sinatra revealed, “the first four or five seconds, I tremble every time I take the step and I walk out of the wing onto the stage.”

Actor Marlon Brando with Larry King during a taping of his show in 1994.Joan Adlen/Getty Images

King scored his infamous 1994 Q&A with “The Godfather” star only because the screen icon was contractually obligated to do one interview to promote his memoir, “Songs My Mother Taught Me,” and chose King. Viewers were treated to the sight of the bloated, reclusive Brando’s pudgy bare feet while he and King sang a brief duet. Brando told King he was out of tune — and planted a goodbye kiss on King’s lips.

Unlike many who forgave King’s tendency to occasionally lose the plot, Seinfeld wasn’t having it in 2007 when King asked him if “Seinfeld” had been canceled after nine years or if Seinfeld had decided to end the show. “Do you think I was canceled?” Seinfeld barked. “I thought that was pretty well documented, Larry. Do you know who I am? 75 million viewers on the last show, Larry.” A sheepish King quickly went to a commercial break.

In sunglasses and King-style slicked-back hair and suspenders, Lady Gaga commandeered much of her 2010 interview from a bemused King, talking about a tour that never materialized with Michael Jackson, quitting cocaine, picking up bar tabs, rejection and her battle with lupus.

King was prescient in 1987 when he began an interview with New York City real estate mogul by saying he was “sounding a lot like a politician,” even though Trump claimed he “didn’t want to be president” on the show.

One of King’s funniest on-screen bromances had to be with rapper Snoop Dogg in 2010 when King takes the wheel of Snoop’s “low to the floor” custom 1967 Pontiac Parisienne. “I can’t reach the gears,” King was heard intoning at one point.

Messner, a controversial figure once married to disgraced televangelist Jim Bakker, was a tabloid staple back in the day. She went on King’s show many times. But her 2007 appearance, cancer-ridden, haggard and weighing just 65 pounds, was the most poignant. She died the next day.

King interviewed the Russian president twice, in 2000 and 2010, grilling him about WikiLeaks. Putin, who was translated in real-time for American audiences, made a rare comment about his personal life, saying his daughters had a right to privacy. “To put them through the public lighter is not what I think is right.”

Elizabeth Taylor speaks during an interview with Larry King.

The screen legend was uncommonly candid in a 1993 interview with King. “I was an alcoholic and it was a disease,” Taylor said. “Come 5:30, I’d have a Jack Daniels. Three, four, five. I’d have wine with dinner. I never got drunk. If you asked around nobody would have said Elizabeth Taylor is a drunk.”