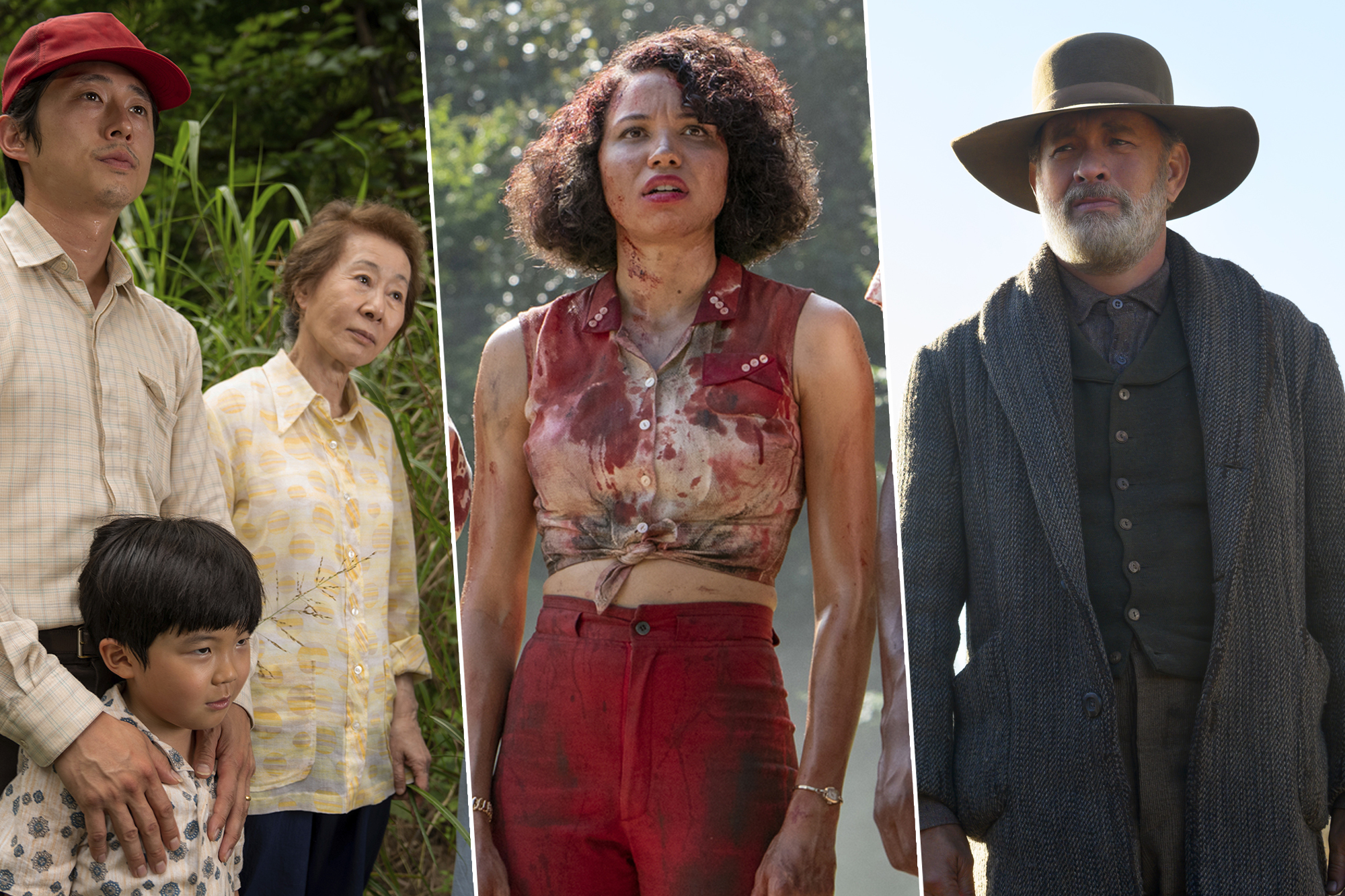 Who said Zoom awards show season has to be boring? In fact, it’s already off to a gloriously bitchy start.

The 2021 nominees for the Golden Globes awards were announced Wednesday morning, and online buzz is already brewing about what many perceive to be egregious oversights — and, in some cases, downright boring retreads.

Former “SNL” stars Tina Fey and Amy Poehler are back to host the broadcast on NBC. Typically the award ceremony is held on the first Sunday of the year but the broadcast was pushed back to Feb. 28 amid the COVID-19 pandemic.

This year also marks a first — the broadcast is going bicoastal. Fey will host her segments from Rockefeller Center’s Rainbow Room in New York City while Poehler will take the helm at the traditional venue, the Beverly Hilton.

The acclaimed “Minari,” the ignored cast of “Lovecraft Country” and a left-out Tom Hanks in “News of the World” are just a few of the surprises — and snubs — on the 2021 Golden Globes nominations list.A24; HBO; Universal Pictures

Until then, check out The Post’s picks for this year’s biggest snubs and surprises in the top film and television categories:

Lee and his Netflix film “Da 5 Bloods” have been an award season favorite since it was released back in June. Receiving acclaim were Lee’s direction, screenplay and his cast, especially the brilliant British actor Delroy Lindo. But the film got zero recognition by the Hollywood Foreign Press Association on Wednesday. That came as a surprise, because the HFPA has backed Lee from the early days — “Do The Right Thing” was nominated for Best Motion Picture – Drama in 1989 — whereas the Oscars took their sweet time.

This one stung. And while Tahar Rahim and Riz Ahmed are deserving of their Best Actor – Drama spots, Lindo, 68, is a journeyman actor whose skill has only brightened, never dimmed. His ferocious one-shot speech in “Da 5 Bloods” as he thrashes through the jungle of Vietnam was the acting highlight of 2020.

Sophia Loren in “The Life Ahead.”Netflix

A beautiful European legend snubbed by the Hollywood Foreign Press Association? Shocking. But it’s true — 86-year-old Sophia Loren’s wonderful turn in “The Life Ahead” as a Holocaust survivor who watches over the children of local prostitutes was left out in the cold.

Meryl Streep and James Corden in “The Prom.”Netflix

“Late Late Show” host James Corden was nominated for Best Actor – Musical or Comedy for his role as a flamboyantly gay Broadway actor in “The Prom” — but why? He took a part that was knock-down, drag-out hilarious when Brooks Ashmanskas played it onstage in the musical, and turned it into a sappy, humorless “poor me” routine with a questionable American accent.

How’s this for news of the world? Tom Hanks — who has a reserved front-row seat at most award shows — was left off the Best Actor – Drama list for his gritty performance as a news reader in Paul Greengrass ’well-received western. His young co-star, Helena Zengel, scored a surprise supporting actress nod.

Tom Hanks and Helena Zengel in “News of the World.”Universal Pictures

A wave of deja vu is coming on! A Korean-language film (“Minari”) is praised from the rooftops by critics and nominated for all sorts of awards for best picture, writing, directing, but its cast is nowhere to be found on any lists. It happened last year with “Parasite,” and history is repeating itself with Yuh-Jung Youn’s exclusion from Best Actress – Drama for her surprising turn as a grandmother who comes to her daughter’s Arkansas farm from Korea.

And now, on to the biggest snubs and surprises on the small screen:

HBO’s creepy historical/ fantasy drama about literal monsters in the Jim Crow south got a deserved nomination in the “Best Television Series — Drama” category. But none of the cast (Jurnee Smollett, Jonathan Majors, Courtney B. Vance) got recognized. Instead, the Globes focused on the tired usual suspects in the drama acting categories. Did “Lovecraft Country” not have any actors? How can a show be worthy of a nod, but none of the stars are?

Yes, the major networks were the big snub of 2021. Broadcast television was, once again, invisible in the Golden Globe noms — with Jane Levy, star of NBC’s “Zoey’s Extraordinary Playlist,” the lone contender in any major category.

That the broadcast networks were skunked isn’t surprising — there were no standouts, even without the COVID hiatus. Cable fared better: “Your Honor” (Showtime), “Lovecraft Country,” “I Know This Much is True” and “Perry Mason” (HBO), “Schitt’s Creek” (Pop) and “Better Call Saul” (AMC) were all cited. But still…not what it used to be in this digital age, which was, no doubt, given a huge boost by the lockdown.

Wednesday’s TV nominations were all-about streaming series and their top cast members, both of whom snared the lion’s share of nominations — though somehow, Ryan Murphy’s overblown Netflix series “Ratched” — which I found nearly unwatchable — garnered nominations for Best Drama and Best Actress (Sara Paulson), perhaps a knee-jerk reaction to those two names who appear on these lists year after year.

For some inexplicable reason, Collins got a surprise nod for Netflix’s insipid “Emily In Paris,” about an American working at a French marketing firm. It’s a show that exists solely for memes and social-media mocking and possesses no real quality, but now Collins could conceivably walk away with a “Best Performance by an Actress in a Television Series — Musical or Comedy” trophy. It rankles more that there’s no shortage of other actresses who could have occupied this spot. What about “Ted Lasso” co-stars Juno Temple and Hannah Waddingham? Those layered performances were full of humor and depth, and they got passed over for an obnoxious second-rate “Sex and the City” wannabe.

On the plus side, it was great to see “Ted Lasso” get a surprise nomination for Best TV Series, Comedy and for star Jason Sudeikis. Both the series and Sudeikis were outstanding and should win big later this month at the Golden Globes ceremonies. “Schitt’s Creek,” heavily rewarded last fall with a total of nine Emmys, was also cited in this category (as was star Eugene Levy) — both are great, but might have exhausted the industry’s enthusiasm by now.

Pacino for “Hunters”? Really? Both Pacino and the series itself barely registered (the Nazi hunters in New York plotline looked good on paper but, again, was nearly unwatchable).

Mescal, 25, is the Irish breakout star of Hulu’s romantic drama “Normal People,” based on the 2018 Sally Rooney bestseller. His vulnerable performance is the best part of the show — which the Emmys recognized, since he got a nod then. But now? The show itself got a Golden Globes nod, as did his co-star Daisy Edgar-Jones, but there’s crickets for Mescal. And while Edgar-Jones delivered a good performance as the spiky Marrianne, Mescal’s turn as Connell was quite frankly better. Ouch.

In the surprising — albeit inevitable — “enough already” nominee category there was Emmy winner Jodie Comer (“Killing Eve”) for Best Actress, Drama — but it was nice to see Laura Linney (“Ozark”) get recognized in that category, along with her co-star Jason Bateman (Best Actor, Drama). They were both riveting last season.

I think the most interesting race will be Best Actor, Limited Series, which includes three performances all worthy of a Golden Globe statuette: Bryan Cranston in “Your Honor,” Mark Ruffalo in “I Know This Much is True” and Jeff Daniels (“The Comey Rule”).