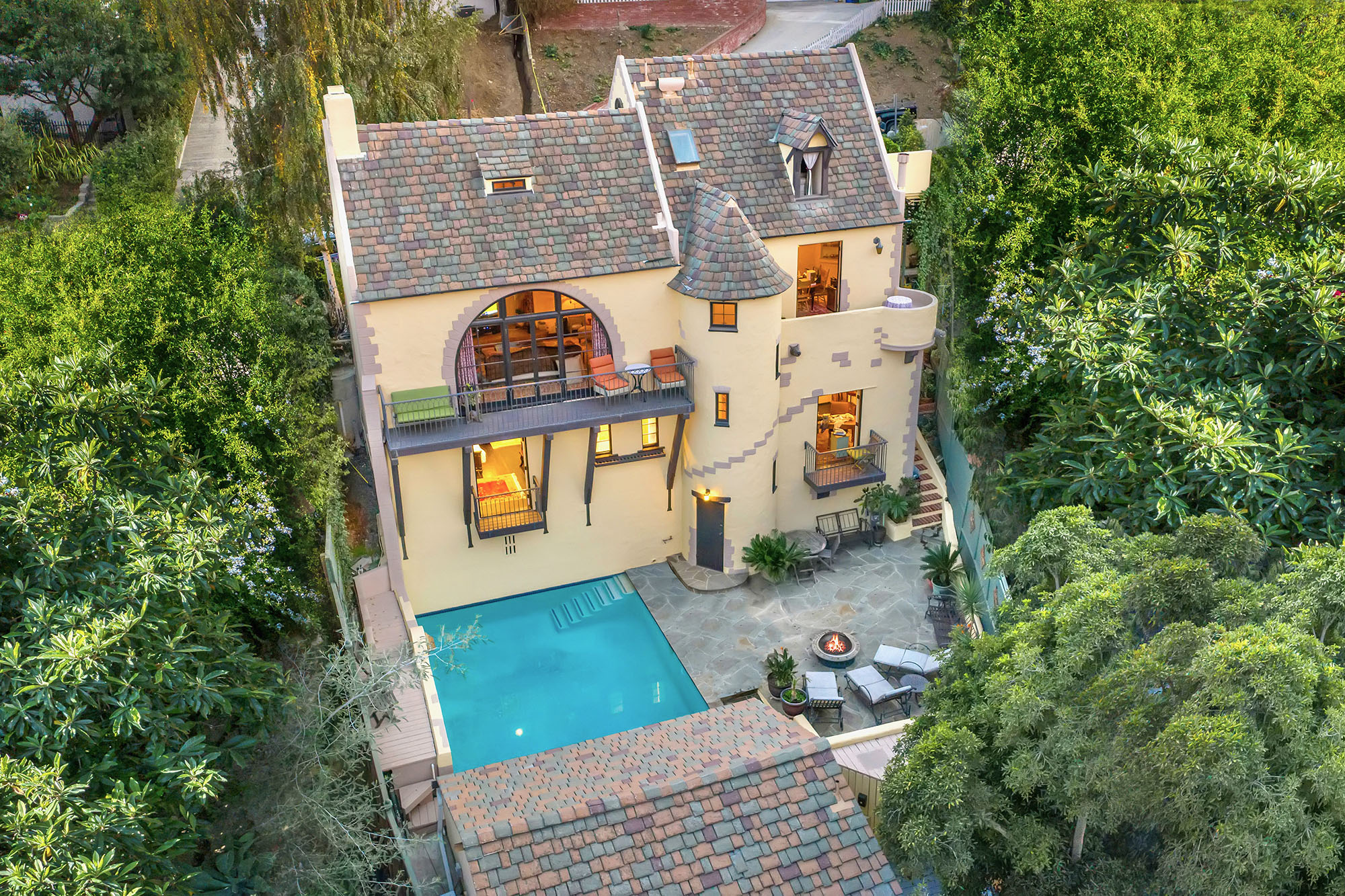 The four-bedroom, three-bathroom home was built in 1926 by Roland E. Hill, the architect of the famed Sleeping Beauty’s Castle at Disneyland in Anaheim, California.

The registered historic home has a castle-like turret, stained glass reminiscent of that in the classic 1959 film — and comes with the original 1926 blueprints of the 2,626-square-foot house. The cottage last sold for $1.57 million in 2006, according to the Realtor.com listing.

The living room has its original hardwood floors, and 26-foot exposed wooden beams create a storybook peak. A red-and-yellow stained-glass window looms over an oversized gray fireplace, and a wrought-iron chandelier and lantern lighting create a mystical ambiance. Arched glass doors open to a balcony overlooking a deck with a heated pool.

Through a pair of medieval-style peaked doorways, the dining room has another stained glass window and exposed ceiling beams, with French doors opening onto a Juliet balcony.Christopher Amitrano

Through a pair of medieval-style peaked doorways, the dining room has another stained-glass window and exposed ceiling beams, with French doors opening onto a Juliet balcony.

The kitchen (and the rest of the house) has been updated with modern appliances.

Up a winding staircase, the master bedroom has a stained-glass window, exposed brick wall and three closets sure to satisfy the prince or princess in potential buyers. Meanwhile, double French glass doors open onto a dramatic balcony overlooking the pool, according to Realtor.com.

The property, which sits on a tenth of an acre, is packed with a main house, a separate studio, a guest house and a two-car garage, plus five citrus trees, a fountain, a slate patio, a fire pit and wrought-iron gates.

One of four bedrooms at the Hollywood Hills cottage.Christopher Amitrano

The Hollywood Hills home is full of charm.Christopher Amitrano

He drew his castle inspirations from his stint as a pilot in World War I, when, after he was injured in a crash, he chauffeured officers around France and Germany, sketching many of the castles he saw along the way, according to the bio his grandson, Steven Edward Hill, wrote for his official IMDb profile.

In the Army, Hill met Walt Disney, when he also was a driver in France for the American Red Cross.

They formed a friendship over the drawings, and Neuschwanstein Castle in Germany became the inspiration for his later work.

His family mantra: “Anything worth dreaming in life is worth working for.”

Disneyland’s Sleeping Beauty castle was designed by Roland E. Hill, who was inspired by castle designs during his stint as a pilot in World War I.Alamy Stock Photo

After graduating from art school and returning in 1924 — just before he designed this fairy-tale cottage — Hill advised on castle and medieval architecture design for Disney, particularly on “Snow White and the Seven Dwarfs,” “Fantasia” and “Sleeping Beauty.”

Realtors-to-the-stars Joshua and Matt Altman, of Douglas Elliman, have the listing.

Hill advised on castle design for “Snow White and the Seven Dwarfs,” “Fantasia” and “Sleeping Beauty,” according to IMDb.DOUGLAS ELLIMAN REAL ESTATE