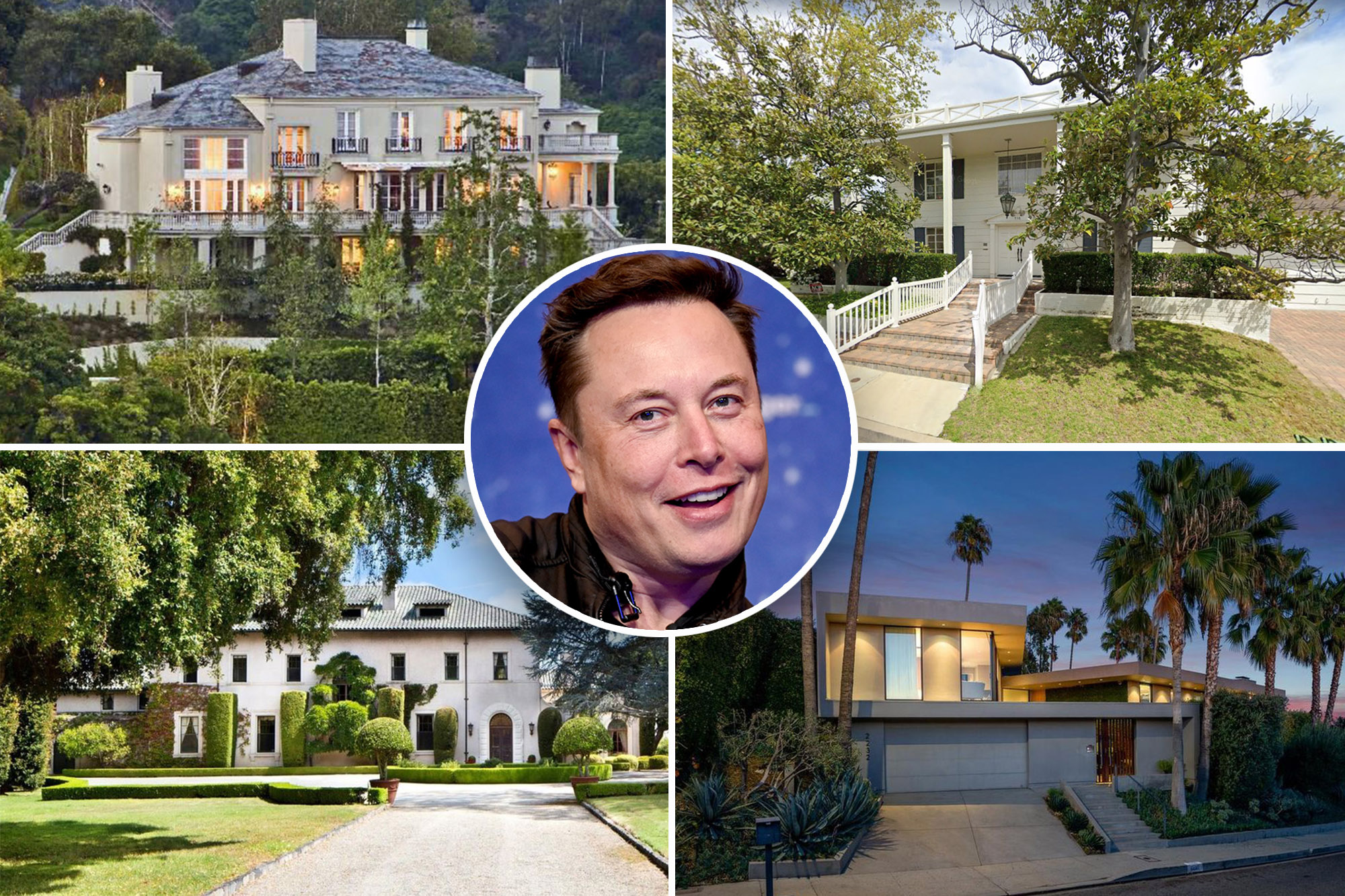 Elon Musk promised in May 2020 that he would sell almost all his assets — an ambitious goal for a man who at the time had $114 million in real estate. But he’s almost there.

“I am selling almost all physical possessions. Will own no house,” the SpaceX founder tweeted. Musk’s portfolio of houses was centralized in Los Angeles, though one house is in Northern California, near San Jose, is still on the market, listed for $35 million.

Most of his sales have made slim profit margins compared to what he originally bought them for, but a few slam-dunk sales have brought his property profits to about $19.5 million.

In part because of his objections to California’s coronavirus-related restrictions, the 49-year-old billionaire is leaving California for Austin, Texas. If he’s renting in Austin, though, it’s unclear where exactly he ended up. It’s also unknown if he is joined by his 10-month-old child, X AE A-XII, and his girlfriend, 32-year-old “Oblivion” singer Grimes.

I am selling almost all physical possessions. Will own no house.— Elon Musk (@elonmusk) May 1, 2020

The Tesla, SpaceX and Boring Company founder announced yesterday that he would create “the city of Starbase” in Texas, the same day that Texas Gov. Greg Abbott announced Texas would lift mask mandates and reopen businesses at 100% capacity.

Musk isn’t one to stay out of the news for long. In the month of February alone, he made headlines for his Dogecoin commentary, for briefly passing Jeff Bezos as the world’s wealthiest man and for offering a $100 million reward for the best carbon-capture technology.

Here’s a look at his (intentionally) dwindling real estate portfolio.

He sold off $62 million in real estate in December

He said on Joe Rogan’s podcast in 2018 that he had one primary home and bought adjoining properties to create a privacy buffer.

The 1.57-acre property appears to have an industrial building near the traditional house (not pictured).Google Maps

This six-bed, seven-bath house on Somera Road is topped with an egret-like metal sculpture, Google Maps images show. The low-key yet eccentric teal house spans 9,300 square feet, according to Realtor.com.

“Project for the big thinker” on Chalon Road

This six-bed, eight-bath stucco house with hardwood floors and a fireplace spans 7,000 square feet, according to Realtor.com. It was built in 1954 and renovated in 1999, according to the listing.

The estate has an eight-car garage, a pool and views of the city and the mountains, according to Zillow.

“A project for the big thinker, designed to showcase one of the best views in Los Angeles — from the city to the ocean and beyond,” the Zillow listing says.

The colonial-style house was built in 1964, and it has two fireplaces and a pool, according to the listing. It also has a “very large paneled den,” a wet bar, an eat-in kitchen, a formal dining room and a paneled library, according to Zillow.

A sliding door opens to a large brick outdoor patio. The 0.85-acre property has a yard, a garden, a pool, a two-car garage, mountain views and views of Los Angeles, according to Zillow.

The 1.26-acre lot has a two-car garage.Realtor.com

The house, purchased by Musk in 2017, was built in the 1960s and appears to have not been updated since.Realtor.com

The dated house has a pool, a spa and a fireplace.Realtor.com

Musk bought some of these houses solely to provide a privacy buffer for his main residence — and we think this could be one of those houses.

This four-bed, four-bath home was built in the 1962 — and with a wood-paneled kitchen and teal carpets, it doesn’t look like it has gotten many updates, according to Realtor.com photos.

The 2,900-square-foot house has a pool, a spa and a fireplace, according to the listing. The 1.26-acre lot has a two-car garage, according to Zillow.

He marketed these properties as “FSBO,” or “for sale by owner.” Typically, an FSBO sale is selected when a seller wants to save every penny, as it forgoes paying out a broker. This, ironically, often leads to the seller losing money.

The choice seemed unusual to some, including the Zillow CEO, who told the eccentric billionaire he was “here to help” in a since-deleted Tweet, according to CNBC.

With high ceilings and luxury finishes, this stucco house has seven bedrooms and 13 bathrooms.Realtor.com

The 20,200-square-foot mansion has a two-story library, a theater and a 1,000-bottle wine cellar.Realtor.com

If we had to guess, we’d say this was the residence Musk was trying to shield from prying eyes.

With high ceilings and luxury finishes, this stucco house has seven bedrooms and 13 bathrooms, according to the listing.

Built in 1999, the 20,200-square-foot mansion has been remodeled with a two-story library, a theater, a two-room guest suite, a 1,000-bottle wine cellar, a gym, a spa and a large owner’s suite with dual bathrooms and closets.

A large owner’s suite has dual bathrooms and closets.Realtor.com

The 1.67-acre property has a lighted championship tennis court and a pool.Realtor.com

The 1.67-acre property has ocean and city views, a lighted championship tennis court, a pool, a grassy yard, a fruit orchard and a five-car garage with a five-car motor court, according to Zillow.

Musk bought this house for $17 million in 2013, making him a $12 million profit in the June sale, the listing shows.

In his original tweet promising to sell his assets, he stipulated that the house, which once belonged to the original Willy Wonka star Gene Wilder, could not “be torn down or lose any [of] its soul.” Realtor.com

He ended up selling the house to Wilder’s nephew — and giving him a loan to finance the purchase.Realtor.com

This three-bed, three-bath stucco ranch house was a particular favorite of Musk’s.

In his original tweet promising to sell his assets, he stipulated that the house, which once belonged to the original “Willy Wonka” star, Gene Wilder, could not “be torn down or lose any [of] its soul.”

Just one stipulation on sale: I own Gene Wilder’s old house. It cannot be torn down or lose any its soul.— Elon Musk (@elonmusk) May 1, 2020

He ended up selling the house in October to Wilder’s nephew — and giving him a loan to finance the purchase, according to Variety.

The 2,750-square-foot rustic home has unique and quirky features, a la Willy Wonka, according to the listing, though further details were not given.

The 0.78-acre property has an oval pool, a five-car garage and a guest cottage. It overlooks a stream, trees, the Bel-Air Country Club Golf Course and Los Angeles in the distance. It was built in 1951 and is “tennant [sic] occupied,” according to the listing.

Musk sold the property in August 2019 for $3.9 million.Realtor.com

The 0.28-acre lot has a saltwater pool and spa.Realtor.com

The house has a cook’s kitchen with Caesarstone counters and a living room with a fireplace.Realtor.com

Musk once owned a $4 million modern house in Brentwood, less than 20 minutes from his Chalon-Somera compound. He sold it before he even made the promise to dump his real estate assets.

This three-bed, three-bath house with floor-to-ceiling windows and wood floors spans 3,000 square feet and has a cook’s kitchen with Caesarstone counters and a living room with a fireplace, according to the listing.

The 0.28-acre lot has multiple patio areas, a saltwater pool and spa, a two-car garage and panoramic views of the ocean, city and canyon.

A $35 million estate still “weighs” him down

He’s not done selling off his assets yet, though. Musk is known to own at least one more property. He seems resolved to get rid of it, telling Joe Rogan: “I think possessions kinda weigh you down. And they’re kind of an attack vector. People say, ‘Hey, billionaire, you got all this stuff.’ ‘Well, now I don’t have the stuff — now what are you gonna do?’”

This property is different from all the others because it’s not in Los Angeles. It’s in Hillsborough, halfway between San Francisco and San Jose. Realtor.com

This property is different from all the others because it’s not in Los Angeles. It’s in Hillsborough, halfway between San Francisco and San Jose. And it looks like Musk is still trying to find someone to take it off his hands.

The stunning 105-year-old stucco mansion has nine bedrooms and nine-and-a-half bathrooms. With 12,400 square feet of hardwood floors, it has a ballroom, a banquet hall dining room, a professional kitchen and multiple fireplaces, according to the listing.

The 47-acre estate has a pool, hiking trails, canyons, a reservoir and views of the Bay. It has a detached three-car garage, eight-car carport and an additional motor court.

Musk listed the home for $35 million in May 2020, only days after his Twitter announcement. He removed the listing in November, and while it is not currently being marketed for sale, the listing language about a “buying opportunity” suggests that the property will be re-listed.

Across its 12,400 square feet, the home has a ballroom, a banquet hall-style dining room, a professional kitchen and multiple fireplaces.Realtor.com

The 47-acre estate has a pool, hiking trails, canyons, a reservoir and views of the Bay. Realtor.com