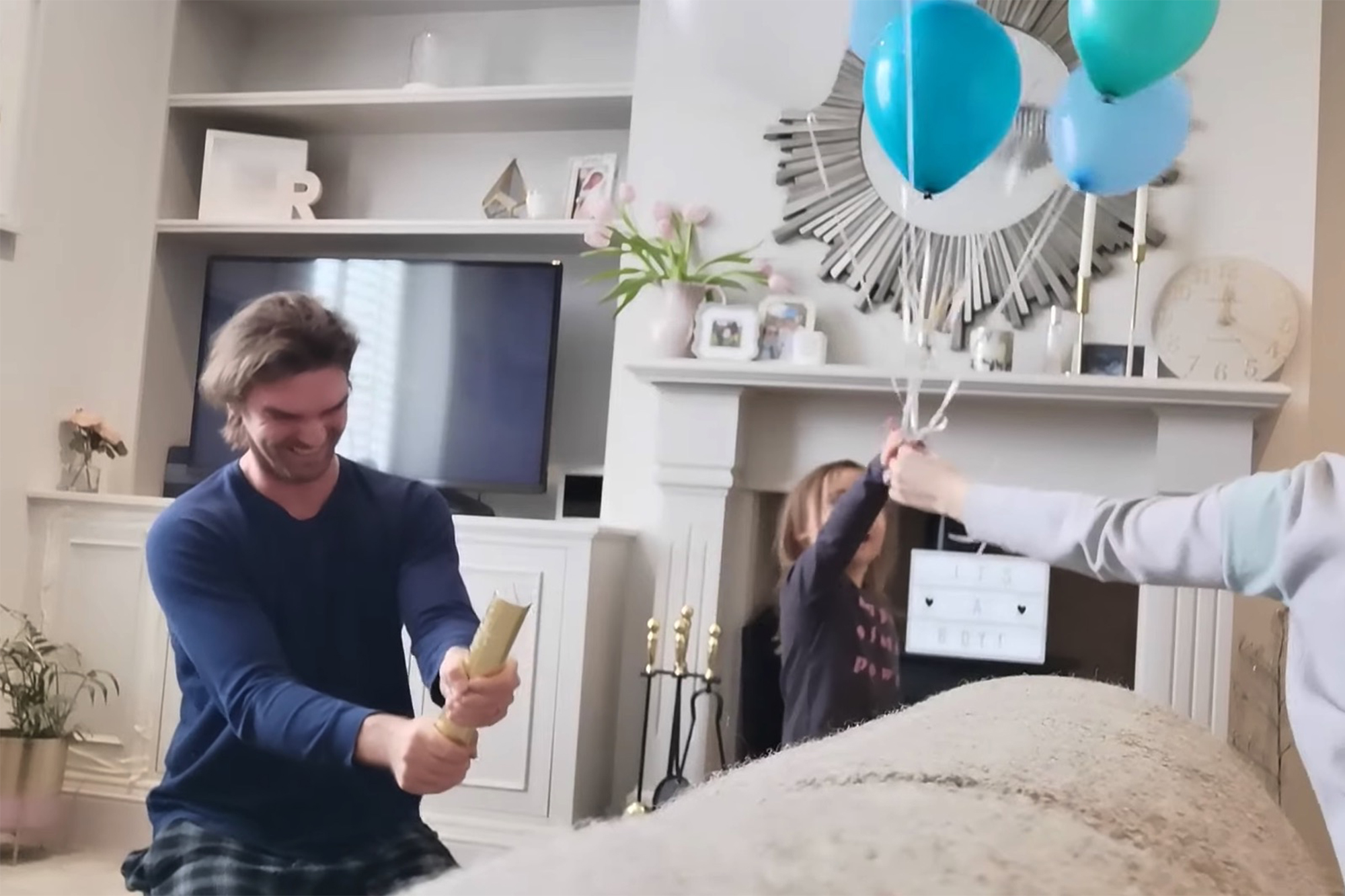 He might not need to reveal anymore babies’ genders after this one.

A gender-reveal party backfired painfully after a man was blasted in the baby-maker after trying to announce the sex of his unborn child with a confetti cannon. A video of the funny failed stunt has since gone viral online.

“From start to finish, everything that could go wrong definitely did,” reads the caption to the YouTube video, which had racked up more than 17,000 views as of Wednesday morning.

The two-minute video, which was uploaded to YouTube Monday and joins a long line of viral gender-reveal snafus, begins innocently enough with the UK’s Gemma Bayliffe Newby and her unnamed partner preparing to share the news that a baby boy is on its way while his sister-to-be hops up and down in anticipation.

“What do you think the baby is? Shall we find out?” asks Gemma from behind the camera as her beau totes the festive firearm. The excited tyke points out that blue confetti corresponds to a boy while pink represents a girl.

Mom then has her daughter release blue balloons — signifying a boy in high gender-reveal tradition — while the father prepares to follow suit with his baby-identifying bazooka.

The stunt goes awry, however, after the husband can’t get the sex pistol to discharge, and ill-advisedly flips it around, causing it to blast blue confetti directly into his groin.

“S – – t,” the pained soul yells before curling up on the floor, prompting his ever-sympathetic daughter and partner to collapse into a fit of giggles. Indeed, for a moment, it appears the man’s baby-making career might’ve started and ended with a bang.

Fortunately, dad recovers from the inadvertent crotch shot and the couple is able to announce that they’re having a boy.

In the realm of gender-reveal misfires, the ball-busting incident still doesn’t compare to one California couple — who burned down a forest after lighting a pyrotechnic device to reveal their fetus’ sex.

BTW: Jenna Karvunidis, the “mommy blogger” credited with inventing this increasingly dangerous trend way back in 2008, has since revealed that she regrets it.

“Who cares what gender the baby is?” she wrote in a viral Facebook post in 2019. “Assigning focus on gender at birth leaves out so much of their potential and talents that have nothing to do with what’s between their legs.”

Karvunidis’ other big reveal: “PLOT TWIST,” she wrote, “the world’s first gender-reveal party baby is a girl who wears suits!” Her 11-year-old offspring now shares dapper looks on her Instagram.

“I’m glad gender reveal parties brought joy to some people — but that joy has been at the expense of nonbinary and trans people,” Karvunidis, 40, told HuffPost. “Even if you say a problem doesn’t affect ‘me’ personally, we should all have enough humanity to realize we don’t have to cause pain for marginalized people to have joy for ourselves.”

It appears this unnamed father’s baby-making career is going viral with a bang from a misfiring confetti cannon on YouTube.Gemma Bayliffe Newby via Youtube