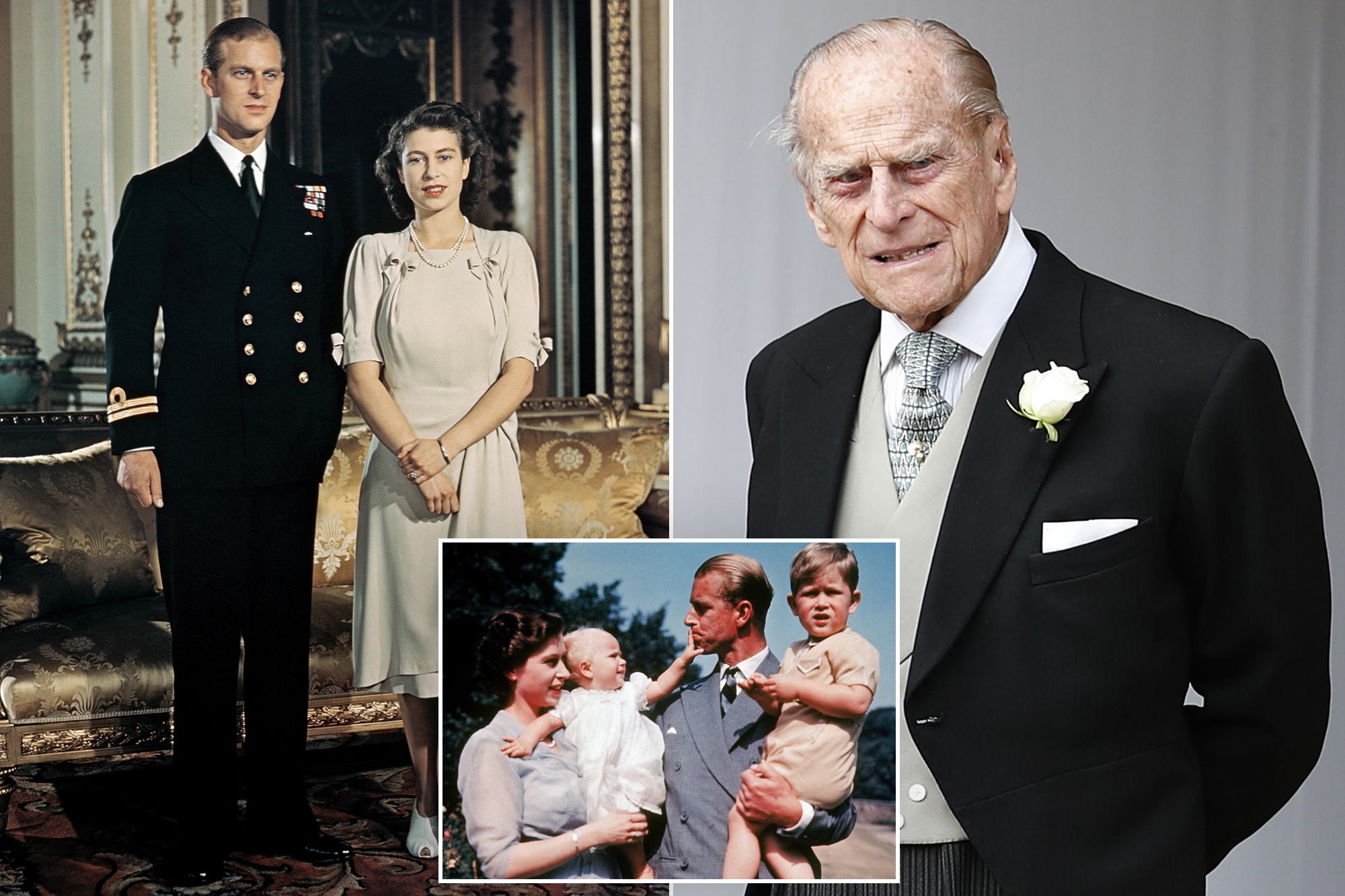 Prince Philip, the longest-serving royal consort in British history, who was a constant companion to Queen Elizabeth II during their 74 years of marriage and the father to royal heir Prince Charles, died Friday. He was 99.

“It is with deep sorrow that Her Majesty The Queen has announced the death of her beloved husband, His Royal Highness The Prince Philip, Duke of Edinburgh,” Buckingham Palace announced on Twitter Friday.

“His Royal Highness passed away peacefully this morning at Windsor Castle.”

Known for his easy-going humor, dapper wardrobe and sometimes startling frankness, The Duke of Edinburgh was a tireless advocate for the monarchy, wildlife conservation, science and a proponent of mixing athletics with scholarship.

Elizabeth and Prince Philip on their honeymoon in Hampshire in 1947.Topical Press Agency/Getty Images

The oldest-ever male member of the British royal family, Philip was rarely seen in public after he retired from his public duties in August 2017.

But he still accompanied his wife to the weddings of their grandchildren, including: Prince Harry to Meghan Markle in May 2018, Princess Eugenie to Jack Brooksbank in Oct. 2018 and Princess Beatrice to Edoardo Mozzi in July 2020.

Princess Elizabeth and Prince Philip at Buckingham Palace shortly before their wedding in 1947.Hulton Archive/Getty Images

His most recent public event was a military ceremony at Buckingham Palace in July 2020.

Despite never being crowned king, the Duke played an important role behind closed doors, supporting his wife of seven decades during times of great tumult.

“He has, quite simply, been my strength and stay all these years, and I, and his whole family, and this and many other countries, owe him a debt greater than he would ever claim, or we shall ever know,” Elizabeth said during her Diamond Jubilee address in 2012.

Elizabeth and Philip, who had Greek, German and Dutch royal blood coursing through his veins, initially met in 1934 at a wedding of Philip’s cousin and Elizabeth’s uncle. They were third cousins through Queen Victoria.

It wasn’t until the two met again five years later — when she was 13 and he was 18 — at the Royal Naval College in Dartmouth that their relationship blossomed.

During a visit with her mother and father — King George VI and Queen Elizabeth — Philip was asked to escort Margaret and her sister Elizabeth around the grounds.

They immediately fell in love and began exchanging letters.

Philip asked Elizabeth’s father for her hand in marriage in 1946 and the king agreed but wanted any formal announcement put off until his daughter turned 21 the next April.

Elizabeth and Philip were married at Westminster Abbey on Nov. 20, 1947, and the ceremony was recorded and broadcast to 200 million people around the world by BBC radio.

For several years after their marriage, while Philip served in the Royal Navy and before Elizabeth became queen, the couple led a normal life in Malta where he was stationed.

Princess Elizabeth and the Duke of Edinburgh on the balcony of Buckingham Palace, London, waving to the crowd shortly after their wedding at Westminster Abbey.Central Press/Getty Images

But their lives changed forever when Elizabeth’s father died on Feb. 6, 1952, while she and Philip were touring Kenya.

After her coronation in June 1953, Philip swore his allegiance to her, becoming her “liege man of life and limb.”

The duke was constantly at her side during her official ceremonies, attending state dinners, meeting with world leaders and extended tours abroad — even though he remained a few steps behind according to protocol of the Orders of Precedence.

But he sometimes grew prickly about being the uncrowned king in the queen’s House of Windsor.

“I am the only man in the country not allowed to give his name to his children. I’m nothing but a bloody amoeba,” Philip once told a friend.

Ever in the public eye, Philip acknowledged that he was under constant scrutiny but still voiced his opinions and spoke freely even if he was prone to hilarious gaffes and sometimes rude remarks.

“Dontopedalogy is the science of opening your mouth and putting your foot in it, a science which I have practiced for a good many years,” he was quoted saying in 1960.

He once told a group of deaf children gathered near a Caribbean steel drum band in 2000, “Deaf? If you’re near there, no wonder you are deaf.” And, when a British Sea Cadet told him she worked at a nightclub in 2009, he asked, “Is it a strip club?”

Prince Philip told the president of Nigeria, who was dressed in traditional robes, “You look like you’re ready for bed!” in 2003.Nic Bothma/Pool/AFP via Getty Images

His cringe-inducing comments went on for decades, including on trips overseas, like asking a group of Indigenous Australians “Do you still throw spears at each other?” in 2002 and telling the President of Nigeria, who was dressed in traditional robes, “You look like you’re ready for bed!” in 2003.

The royal couple traveled extensively and made their first state visit to the United States in 1957, when they met with President Dwight Eisenhower in Washington, DC, and later traveled to New York City.

Elizabeth was feted at a gala at the Seventh Regiment Armory on Park Avenue.

Prince Philip (left) shares a laugh with President Dwight Eisenhower as he is presented with the National Geographic Society’s Gold Medal for service to geography during a ceremony at the White House.United States Information Agency/PhotoQuest/Getty Images

She and Philip also took part in the 200th celebration of America’s declaration of independence from Britain in 1976, attending a state dinner with President Gerald Ford and events in New York City.

The royal couple had four children.

They first became parents in November 1948 with the birth of Prince Charles, the heir to the throne. Then came Anne in August 1950, Andrew in February 1960 and Edward in March 1964.

Princess Diana and Prince Philip in Windsor in 1987.Eric Bouvet/Gamma-Rapho via Getty Images

According to reports and accounts in several books, Philip played a critical role after the royal family, especially the queen, came under harsh criticism following Diana’s death in 1997 — a year after her divorce from Charles.

The royals — including Diana’s sons William and Harry — were at the family’s Balmoral Castle in Scotland when Diana was killed in a car crash in Paris and they remained out of sight for days.

Pressured to address her daughter-in-law’s death, the Queen appeared on TV to describe Diana as an “exceptional and gifted human being.”

To many she failed to express the necessary sadness. But Philip took the boys under his wing.

And when William and Harry were hesitant about walking behind their mother’s coffin during the funeral procession, he consoled them.

Lieutenant Philip Mountbatten, prior to his marriage to Princess Elizabeth, saluting at the Royal Naval Officers School in Kingsmoor, England, in 1947.PNA Rota/Keystone/Getty Images

Prince Philip was born on the Greek island of Corfu on June 10, 1921, the son of Prince Andrew of Greece and Princess Alice of Battenberg, Germany. He was the only boy among four sisters.

At the time of his birth, Philip was sixth in line to the Greek throne.

A mix of Greek, German and Dutch royal blood, Philip attended school in France, Germany, England and Scotland, where he became a proficient as a seaman — even sailing his own boat to the Orkney Islands.

Queen Elizabeth II and Prince Philip during a celebration for Elizabeth’s 90th birthday in London in 2016.Jeff Spicer/Getty Images

At the beginning of World War II, he became a midshipman and served on several cruisers and battleships in the Mediterranean and was mentioned in dispatches for his bravery during the Battle of Cape Mattapan.

He was also the recipient of the Greek War Cross of Valour.

Later, Philip rose to lieutenant, becoming one of the youngest officers in the navy to be second-in-command of a destroyer, and participated in the allied invasion of Sicily.

Philip also served in the Pacific in the war against Japan, served as an aide-de-camp to his uncle Lord Mountbatten and was present at the Japanese surrender in Tokyo Bay in 1945.

Before his marriage to Elizabeth, he gave up his Greek and Danish royal titles and became a British subject, adopting the name Mountbatten from his maternal grandparents.

But absent from the wedding in post-World War II Britain were much of Philip’s German family, including his sisters, who had married German princes, including two with Nazi ties.

Prince Philip is driven away from Paworth Hospital in 2011.Carl Court/AFP via Getty Images

On the eve of their marriage, Elizabeth’s father, King George VI, awarded him the Dukedom of Edinburgh and decreed that he would be known as “His Royal Highness.”

Philip took up his royal role with gusto. He toured coal mines, factories and industrial plants.

Prince Philip disembarks from a Harvard Trainer aircraft after a flight at RAF White Waltham in Berkshire.PNA Rota/Getty Images

The always vigorous and athletic 6-foot-1 Philip also spent must time promoting youth sports, and in 1956 he founded the Duke of Edinburgh’s Award to honor people between the ages of 14 and 24 who took part in public life, physical fitness and self-improvement.

The Duke learned to fly with the Royal Air Force in 1953 and got his license to pilot a helicopter in 1956.

He was also the first royal to do a television interview in 1961.

In 2011, Philip was air-lifted to a hospital after suffering chest pains and was treated for a blocked coronary artery. He was hospitalized for 10 days in 2018 for a hip replacement. He was hospitalized again in 2019 for what the palace said was planned treatment of a pre-existing condition.

The duke was forced to give up driving at the age of 97 after he smashed into a car while driving a Land Rover near Sandringham estate in January 2019. Philip wasn’t injured and the woman in the other car suffered a broken wrist.

Even after that, Philip continued to drive a horse and carriage from time to time on private lands.

During England’s coronavirus lockdown, which began in March 2020, the duke stayed at Windsor Castle, west of London, with the queen.

Both the queen and Philip received a first dose of a vaccine against COVID-19 in early January 2021.

In February 2021, Philip was admitted to the hospital again after feeling unwell, and was treated for an infection and underwent a heart procedure, before being released a month later.

While Philip was hospitalized, the royal family was rocked by an explosive interview Prince Harry and Meghan Markle gave to Oprah Winfrey.

The couple, who quit the monarchy in 2020 in what was dubbed “Megxit,” alleged that the palace had failed to help Markle when she had suicidal thoughts. Markle, who is biracial, also said that unidentified member of the royal family had raised “concerns” about the color of her baby’s skin when she was pregnant with son Archie.