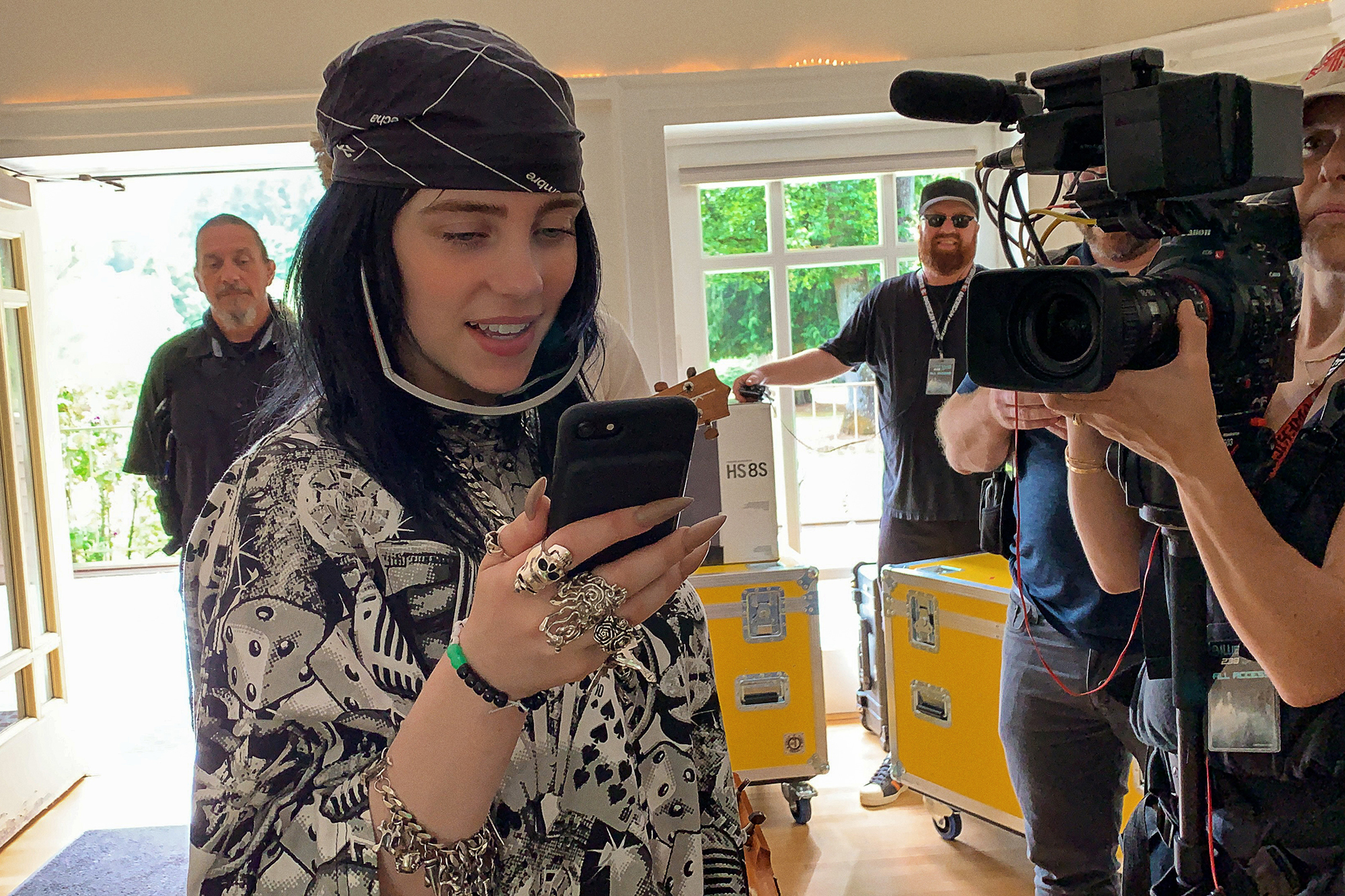 Forget winning five Grammys — when Billie Eilish was younger, everything she wanted could be summed up in one name: Justin Bieber.

“When I was, like, 12 … that was like my first love,” the “Everything I Wanted” singer, now 19, says during a radio interview in the new documentary “Billie Eilish: The World’s a Little Blurry,” premiering Friday on Apple TV+.

In fact, Eilish was once so obsessed with Bieber that her mother considered taking her to therapy to deal with her fixation.

“I literally remember sobbing into a pillow because I thought, ‘I’m never gonna feel this way about anyone [else],’ Eilish says of the 26-year-old “Holy” crooner. “I literally was terrified that when I got a boyfriend when I was older that … he won’t compare.”

Billie Eilish chats with her mom Maggie in the new Apple TV+ documentary “The World’s a Little Blurry.”Courtesy of Apple TV+

Later, the most moving part of the documentary comes when Eilish actually gets to meet Bieber at Coachella in 2019 after he has just collaborated on a remix of her mega-hit “Bad Guy.” When they fall into the longest, biggest hug and she weeps on his shoulder, it’s clear that that moment means more to Eilish than any Grammy ever could.

It helps explain why Eilish now has such a special connection with her own fans. “I don’t think of them as fans, ever,” she says. “They’re not my fans — they’re, like, part of me.”

Also a big part of her? Her family. Mom Maggie taught Eilish how to write songs; her dad, Tom, schooled her on playing the piano and the ukulele. And her parents — along with older brother Finneas — backed her up in talent shows as a little kid growing up in Los Angeles.

“Our family was just one big f—king song,” says Eilish. “And I still make music in my brother’s bedroom.”

“The World’s a Little Blurry” goes inside the making of Eilish’s debut album, 2019’s “When We All Fall Asleep, Where Do We Go?,” with Finneas — who produced and co-wrote the LP — and his sister at their family home. The two siblings have an instinctive, symbiotic creative process built on their tight bond. While he is the architect behind her moody, otherworldly soundscapes — he even won a Producer of the Year Grammy for his efforts — it’s clear that she still has her own vision, even vowing to direct all of her own videos at one point.

It does come as a surprise, though, when Finneas reveals that “Billie hates writing songs in general.” And his sister concurs: “Every single time I’ve written a song that I actually like, I’ve hated the process,” she says. “It tortures me.”

As for the darkness of her lyrics, Eilish tells one interviewer, “People are always like, you know, ‘It’s so dark. Like, have happy music.’ I’m like, ‘Well, I’m never feeling happy, so why would I write about things I don’t know about?’ I feel the dark things.”

Billie Eilish’s brother Finneas produced her debut album, “When We All Fall Asleep, Where Do We Go?.”Courtesy of Apple TV+

Toward the end of the film, she reveals just how dark things have gotten for her. “To be honest with you, I didn’t think I would make it to this age,” says Eilish, who began struggling with depression after a serious hip injury forced her to stop dancing at 13. “I was, like, 14-15. I had razors hidden in places, and I had Band-Aids hidden in the little corner of my room. And I always had Band-Aids on my wrists. I was literally locking myself in the bathroom and making myself bleed ’cause I thought I deserved it.”

But her heart still belongs to Bieber.

The doc finishes with her getting a congratulatory FaceTime from her “first love” after her big Grammy sweep in 2020.

“I can’t believe it — it’s insane,” she says through giggles, before ending the call with “I love you.”

Paris Hilton Discusses Britney Spears’ Situation – Insists She Can’t Even ‘Imagine’ Getting Controlled Like That!
Gabrielle Union Praises Another Special Lady – Check Out Her Message
Comment