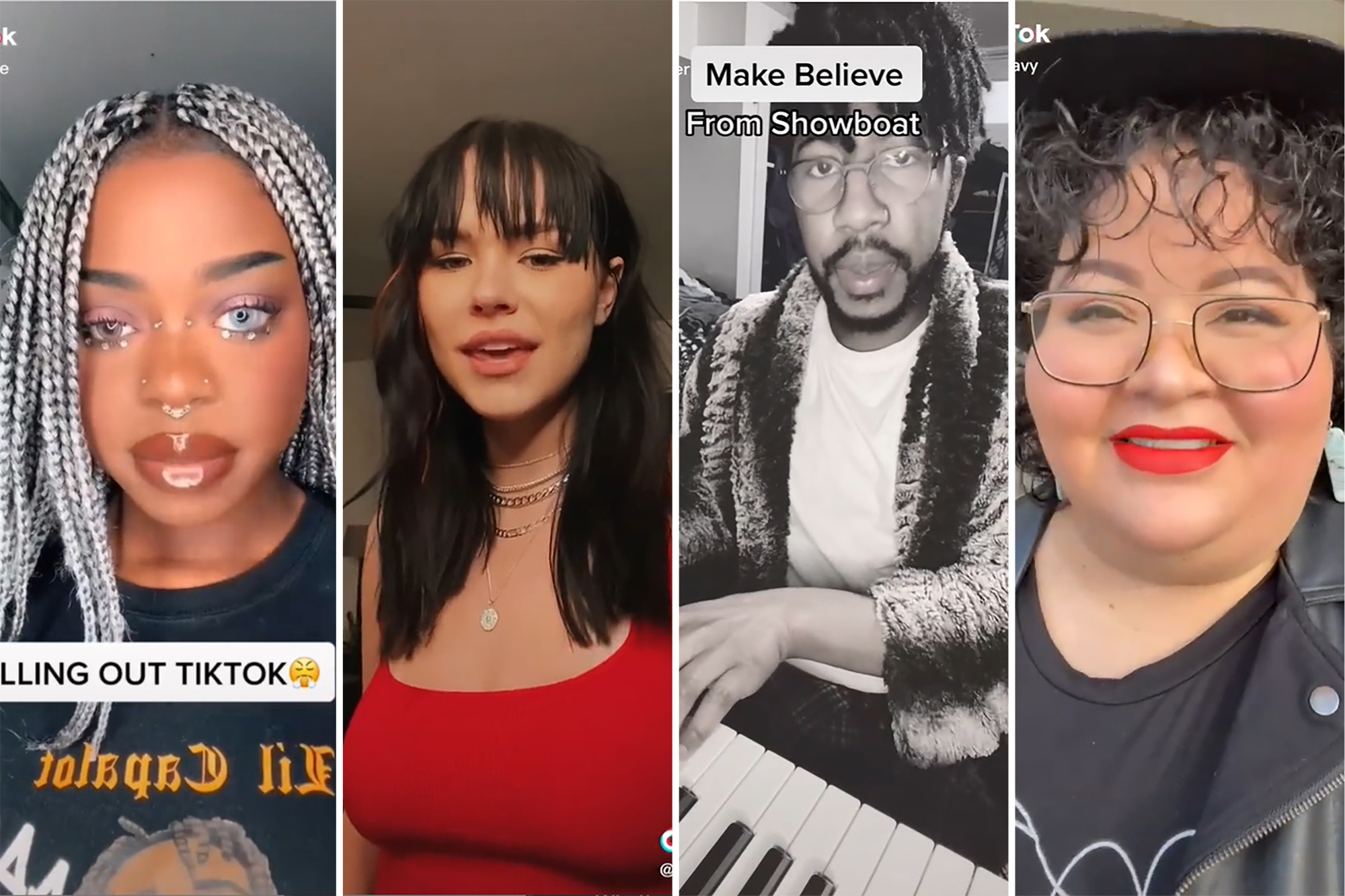 If you thought TikTok was where your 12-year-old nephew does the flossing dance, well, you’d be correct. But there’s more! Much more.

These days, enterprising TikTokers have millions of fans, are making albums, scoring agents, getting TV gigs and composing online musicals that rake in $2 million. The app is a hotbed of talent.

Check out these 10 TikToks to witness the stars of tomorrow.

Lubalin, 30, is an experimental musician.Denise Audette

After releasing a self-titled experimental EP last September, this Montreal artist — who just released a new single, “long txts,” with electro echoes of The Weeknd — became a viral sensation when he took screenshots of random Facebook exchanges involving baby boomers and turned them into dramatic musical readings.

Must-watch video: The second video in his “Internet Drama” series, which has racked up some 31 million views, features Lubalin making a song out of a Facebook exchange about a supposedly stolen broccoli casserole recipe. As the moody music plays, he acts out different characters in a shower cap and hair curlers. — Arnold

Baby Storme, 20, is a singer.Terrhon Vaughn

The Yonkers native — whose real name is Janice Mofus — has been building her TikTok following with original alt-R&B tunes, such as “Mixed Feelings” and new single “Jackson,” which have her on her way to becoming “the black Billie Eilish.” As for how she came up with her stage name, she said, “My hair, for the most part, is silver, so people used to compare me to the superhero Storm. And then my personality is so crazy like a mini storm, a baby storm.”

Must-watch video: Speaking of Eilish, Baby Storme racked up 1.3 million views when she mimicked the “Bad Guy” singer in her “Lovely” duet with Khalid. — Arnold

His upbeat track “Upside Down” has become one of the most used sounds on TikTok, with more than 15 million videos created and over 7 billion plays. The song went so viral that TikTok used it for its global TV commercial.

Must-watch video: JVKE — born Jake Lawson in Murrysville, Pa. — got Charlie Puth to jump on a remix of “Upside Down,” and the two let TikTok in on the collaboration fun. Now JVKE has partnered with electronic duo Galantis on the new single “Dandelion.” — Arnold

This Phoenix-bred, Los Angeles-based alt-pop artist saw her 2-year-old single “Drugs” get a big boost when a TikTok influencer used it for a video. “Overnight, it just kinda popped off,” said the singer, whose full name is Taylor Upsahl. “I really don’t know how it even happened. I’m just super stoked and lucky ’cause that song’s always been kind of like my favorite song of mine. So the fact that it got a second life is really, really cool.” Indeed, a new remix of “Drugs,” featuring singer-rapper Blackbear, has just dropped.

Must-watch video: Among the 2 million videos with “Drugs” are clips with TikTok star Alex French and Jason Derulo. “When Jason Derulo did it, that was pretty sick,” said Upsahl. “That was like, ‘Oh s–t, this song actually is having a moment on TikTok!’ ” — Arnold

It’s incredible that Bravo hasn’t hired Martinez-Reid yet. His spot-on sketches skewer iconic reality TV like “The Real Housewives,” “RuPaul’s Drag Race” and “Chopped” in the best way. He draws on the insanity and tropes from the series to make hysterical one-minute, drama-filled clips that compete with the full-length episodes they’re based on. But there’s no disrespect, his shade is a labor of love. The attention to detail, special effects and side characters (his best friend Eden, sister Alyssa and mom) make Martinez-Reid’s TikTok binge-worthy viewing.

Must watch video: After his best friend Eden swears at him and calls him fake, Boman retaliates by tearing his head off, naturally. “The Real Housewives of New York City’s” Aviva Drescher could learn a thing or two from his poised delivery. — Dellatto

Do you remember when Tila Tequila and Meghan McCain were best friends?  Did you know Nick Cannon named his daughter Powerful Queen Cannon? I did, because I watch Pessoa’s videos. The YouTuber-turned-TikToker blends unhinged humor with tabloid drama and a dash of Y2K nostalgia. Try to keep a straight face as she gasps at Britney Spears’ ex getting caught in the Capitol siege. Her trademark acrylic nails and wild gesticulating complete her silly vibe. This is what “TMZ Live” wishes it could be.

Devon Rodriguez, 24, is an artist.Stefano Giovannini

“I’ve always wanted to become a famous artist,” Rodriguez, a Bronx native and reformed graffiti artist told The Post. “After I was arrested at 13 for graffiti, I knew I couldn’t be famous and go to jail so I switched it up.” Now, he rides the subway — usually the J train, or the 6 — and draws photo-realistic portraits of his fellow passengers in a sketch book.

He’s racked up millions of views for what he calls his “subway pandemic series,” eventually giving in to followers’ demands that he surprise his subjects with the actual drawing. Riders hoping to score an original should look out for Rodriguez on their commute.

“I just bought a portable easel,” he said. “So I’m hoping to do a real painting of a passenger on the subway soon.”

Must-watch video: A combo of reactions from unassuming dudes who are shocked and flattered when Rodriquez presents them with his uncanny illustrations. — Weiss

If you’ve been jamming out to the pop-turned-classical tunes from Netflix’s “Bridgerton,” say “Cello!” to Andrew Savoia. The charismatic musician from Arlington, Virginia, blends his refined sound with modern hits — Beyonce’s “Lemonade,” The Weeknd’s “Blinding Lights” and “Africa” by Toto (OK, most of Generation TikTok might not know that one). The dapper Savoia, who works as a medical scribe, kicked off his videos this summer as a pandemic hobby, and often performs in front of scenic Washington, DC, backdrops. “I think music has a way of bringing people together,” he told Arlington Magazine. “And it’s been inspiring to see people come together, even though we’re separated right now.”

Must-watch video: Savoia takes all of singer Harry Styles’ quirky swagger and channels it into a cello for his cover of the song “Adore You,” which he plays under a gorgeous tree. — Oleksinski

Is TikTok the future of Broadway? Who knows? But it’s definitely the present — since it’s pretty much all we’ve got. While brick-and-mortar theaters are closed, the biggest show to debut in the past several months was “Ratatouille: The TikTok Musical.” The production that raised $2 million for the Actors Fund featured 60-second songs from several composers, including the talented NYU student RJ Christian. His fun, smart TikTok has a bit of everything: original songs, covers, jokes and musical theater hot takes. Besides his composing skills, the guy has a rich baritone, too.

Must-watch video: On the day F. Scott Fitzgerald’s novel “The Great Gatsby” entered the public domain — meaning anybody can adapt it free of charge — Christian posted an original song inspired by Jay Gatsby stretching his arms out into the distance. “I’m reaching for the green light/ I’m rowing toward the shore / I’m reaching for the island of the life we lived before.” Clever, clever. — Oleksinski

Estefania Saavedra, is a comedian.TikTok

TikTok was made for comics like Estefania Saavedra, who has a face of 1 million expressions. Originally from Ecuador, the Houston, Texas, resident performs wacky, extreme scenes, songs and hilarious dances, and transforms into a cast of characters by simply moving a facial muscle or drawing on a mustache (she’s also a makeup artist). Look no further for silliness.

Clare Crawley Breaks Her Silence On The Dale Moss Breakup – Says She Was Blindsided!
Luann De Lesseps Denies Partying Without A Mask And Putting The RHONY Production At Risk
Comment