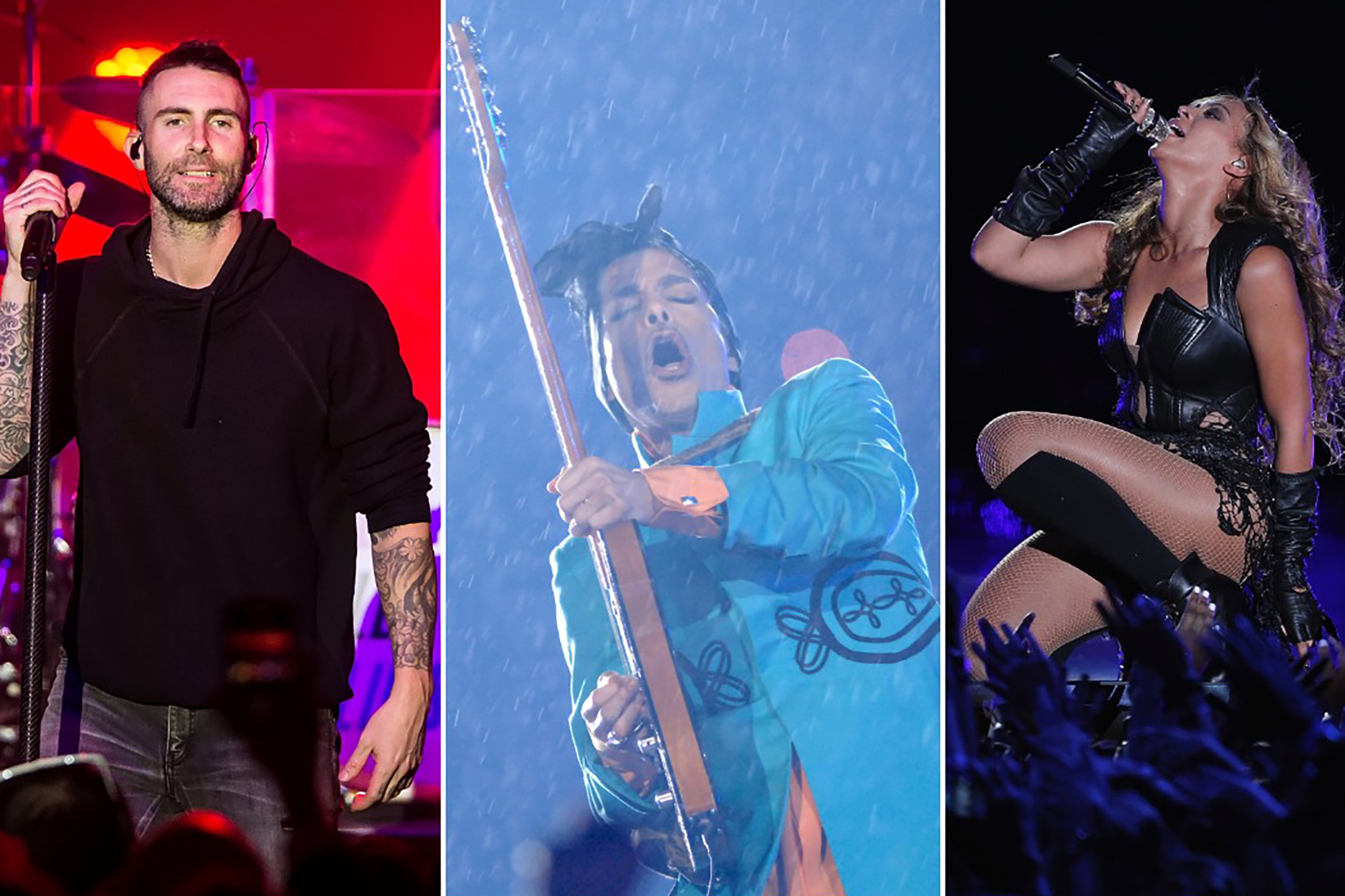 Super Bowl 2021 will be clearing the field for a bona fide “Starboy” this year: The Weeknd.

The Canadian crooner behind such chart-topping hits as “Can’t Feel My Face,” “Heartless” and “Blinding Lights” will headline the halftime show when the Tampa Bay Buccaneers face off against the Kansas City Chiefs on Sunday at the Raymond James Stadium in Tampa, Florida.

And after last year’s femme-tastic fireworks with Jennifer Lopez and Shakira, this is sure to be a decidedly different kind of vibe wrapped — like The Weeknd’s bandaged face of late — in moody mystery.

While we wait to see if this will be a Weeknd to remember, let’s go to the replay and look back at some of the best — and worst — Super Bowl halftime shows of all time.

When it poured during Prince’s performance of “Purple Rain” at Miami’s Dolphin Stadium — where his aqua and orange ensemble matched the colors of the hometown team — it seemed as if he had commanded the weather to add more drama to the occasion. But the real magic came in the way he ruled the stage with his own hits, such as “Let’s Go Crazy” and “Baby I’m a Star,” as well as covers of Creedence Clearwater Revival (“Proud Mary”), Bob Dylan (“All Along the Watchtower”) and Foo Fighters (“Best of You”). No special guests necessary.

The King of Pop changed the game for Super Bowl halftime shows with the royal spectacle of his extravaganza at the Rose Bowl in Pasadena, California. From the moment he took the stage, holding a mannequin pose for some 90 seconds, he thrilled us all with a triumphant set that included “Billie Jean,” “Black or White,” “We Are the World” and “Heal the World.”

You could say that the arrival of Beyonce 2.0 — the one who slays with extra hot sauce in her bag — happened when she was the musical headliner at Super Bowl XLVII at the Mercedes-Benz Superdome in New Orleans. From then on, she ascended to the throne vacated by the King of Pop as the greatest living all-around entertainer on the planet. And she did it all while staging a Destiny’s Child reunion that showed she could still be a team player, too.

Certainly, this will go down as the most memorable Super Bowl halftime show of all time. But there was much more to this all-star blowout than the “Nipplegate” controversy that sacked CBS, producers MTV and, most severely, Janet Jackson. Before those last few seconds of Timberlake’s “Rock Your Body” that stopped the world, this was a pretty unbeatable lineup. (BTW: Jackson fans are still waiting for that redemption invite.)

The battle of the Latina divas was a fiercer face-off than the one between the Kansas City Chiefs and the San Francisco 49ers. Both the Bronx-born Lopez and the Colombian star Shakira brought muy caliente stuff to the Miami’s Hard Rock Stadium in an electric halftime show. After guest appearances by Bad Bunny (with Shaki) and J Balvin (with J.Lo), the whole thing ended with an epic dance-off in which their hips most certainly didn’t lie.

It’s now pretty hard to believe that the Black Eyed Peas were ever big — or good — enough to headline the Super Bowl halftime. But even back in 2011, when they led the festivities at Cowboy Stadium in Arlington, Texas, the Peas didn’t seem worthy of the gig. Absolutely no one had that feeling.

This Disney-produced show, with a “Tapestry of Nations” theme, felt like one long — and boring — commercial for the brand. Indeed, it was basically a plug for the Walt Disney World Millennium Celebration that was taking place at Walt Disney World at the time. I mean, when Phil Collins sings his “Tarzan” song “Two Worlds” instead of “In the Air Tonight” — or even freaking “Sussudio” — you know that something has gone horribly wrong.

Before Michael Jackson came along to soup up the Super Bowl halftime, there were some pretty lame lineups. This one was so weak that it lost major viewership to a live special episode of “In Living Color.” Featuring figure skaters and hockey players in a Winter Olympics theme titled “Winter Magic,” it dared to even take attention away from the only sport that should have existed on its big-game day. No way that poor Gloria Estefan could salvage this mess with “Get on Your Feet.”

Adam Levine’s crew got dragged on social media for a performance that made us wonder how they had ever been booked for the biggest gig in the biz. (Well, apparently the likes of Rihanna and Cardi B had already turned it down.) By the time a heavily tatted Levine went shirtless, it felt like a desperate attempt to salvage a snooze of a set. And — 15 years after Janet Jackson’s infamous wardrobe malfunction — his double-nipple display was called out as a double standard.