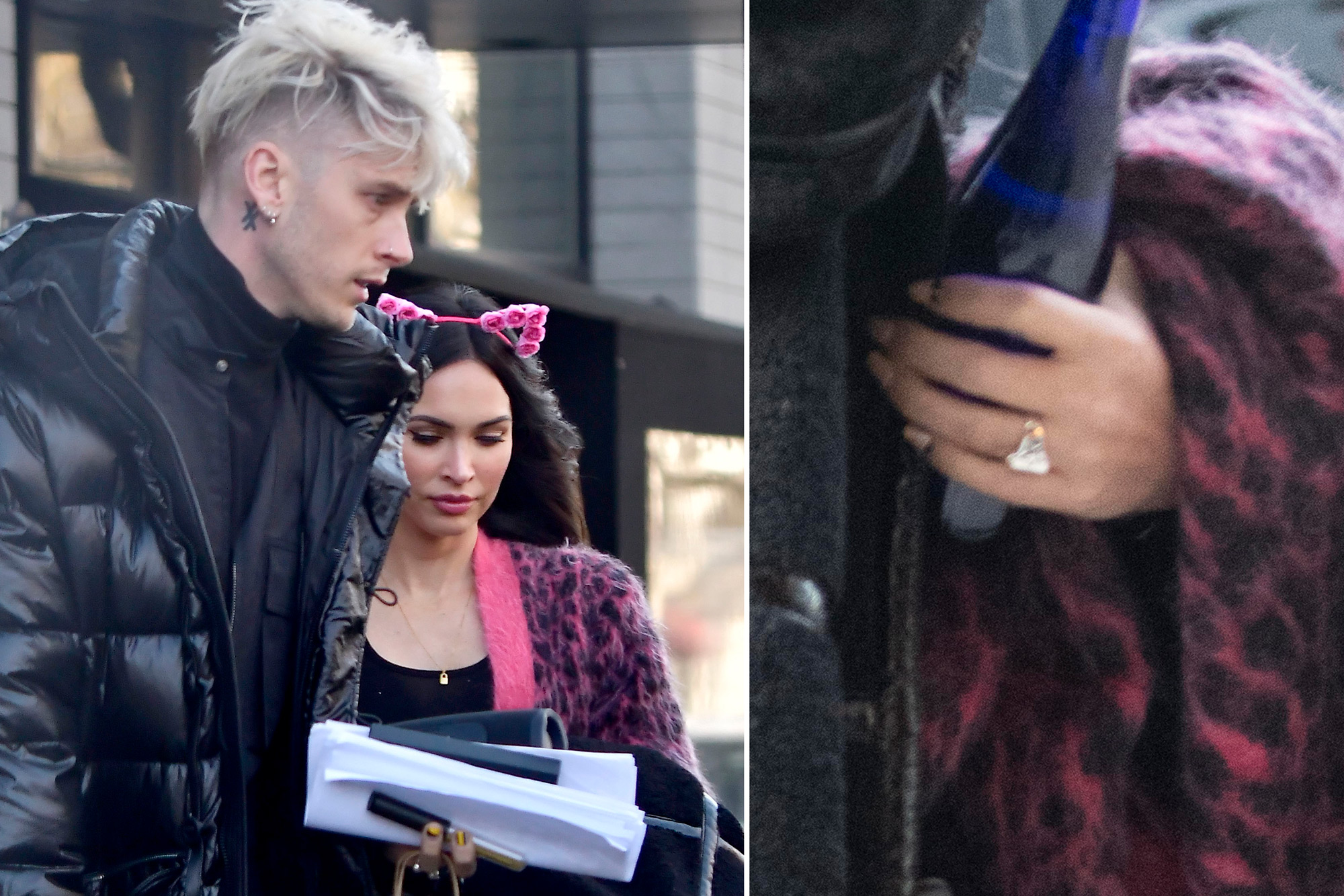 New photos of Megan Fox sporting a massive ring on her left hand have many speculating that she might be engaged to boyfriend Machine Gun Kelly.

The couple, who have been flaunting their love all over social media since last July, were spotted in New York on Thursday ahead of Machine Gun Kelly’s “Saturday Night Live” performance this weekend.

Photos show the pair heading back to their hotel with Fox, 34, wearing a pink animal-print coat with a cat ear headband while Kelly, 30, wore all black, topping off his look with a black puffer coat.

In other photos, Fox is bundled up in a black coat and her left hand showing off the huge sparkler.

Reps for Kelly and Fox didn’t immediately return our request for comment, but the engagement wouldn’t come as a complete shock given how fast their relationship moved.

Megan Fox was wearing a massive ring on her left hand while out in New York this week.Splash News / SplashNews.com

Fox and Kelly — who met while filming “Midnight in the Switchgrass” — were first spotted out together in May. Shortly after, Fox’s husband at the time, Brian Austin Green, announced the couple had split at the end of 2019.

Since then, the couple has been packing on the PDA and declaring their love for each other on social media.

“We’re actually two halves of the same soul, I think. And I said that to him almost immediately, because I felt it right away,” Fox said in July, just before they made their love Instagram-official.

Megan Fox wears a large ring on her left hand while out in New York with Machine Gun Kelly.Splash News / SplashNews.com

“Achingly Beautiful Boy… My heart is yours 🔪♥️🔪,” she captioned a photo of them in August.

By September, Kelly, who has a 12-year-old daughter from a previous relationship, was detailing to Howard Stern how he fell in love for the first time.

“I didn’t know what [love] was until me and her made eye contact. That’s when I was like, ‘Whoa,’” he said, adding that when they were on set together, he would wait outside of his trailer to catch a glimpse of her.

And of course, what relationship wouldn’t be complete without matching tattoos?

However, it seems Fox and 47-year-old Green — who share three sons, Noah Shannon, 8, Bodhi Ransom, 6, and Journey River, 4 — aren’t officially divorced yet, with legal docs showing they are still in proceedings. Fox and Green filed their paperwork on the same day with one major difference — the separation date. Green listed March 2020, while Fox put November 2019.

But the divorce hasn’t stopped Green from moving on either. He recently made his relationship with “Dancing with the Stars” pro Sharna Burgess Instagram-official. The couple were first linked when they were spotted in December catching a flight together.

Kelly Rowland Stuns In Black Swimsuit Only 5 Months After Having 2nd Child – Pic!

Tamar Braxton Has An Important Confession To Make For Her Fans

Gabrielle Union Praises A Woman Who Is Changing The World