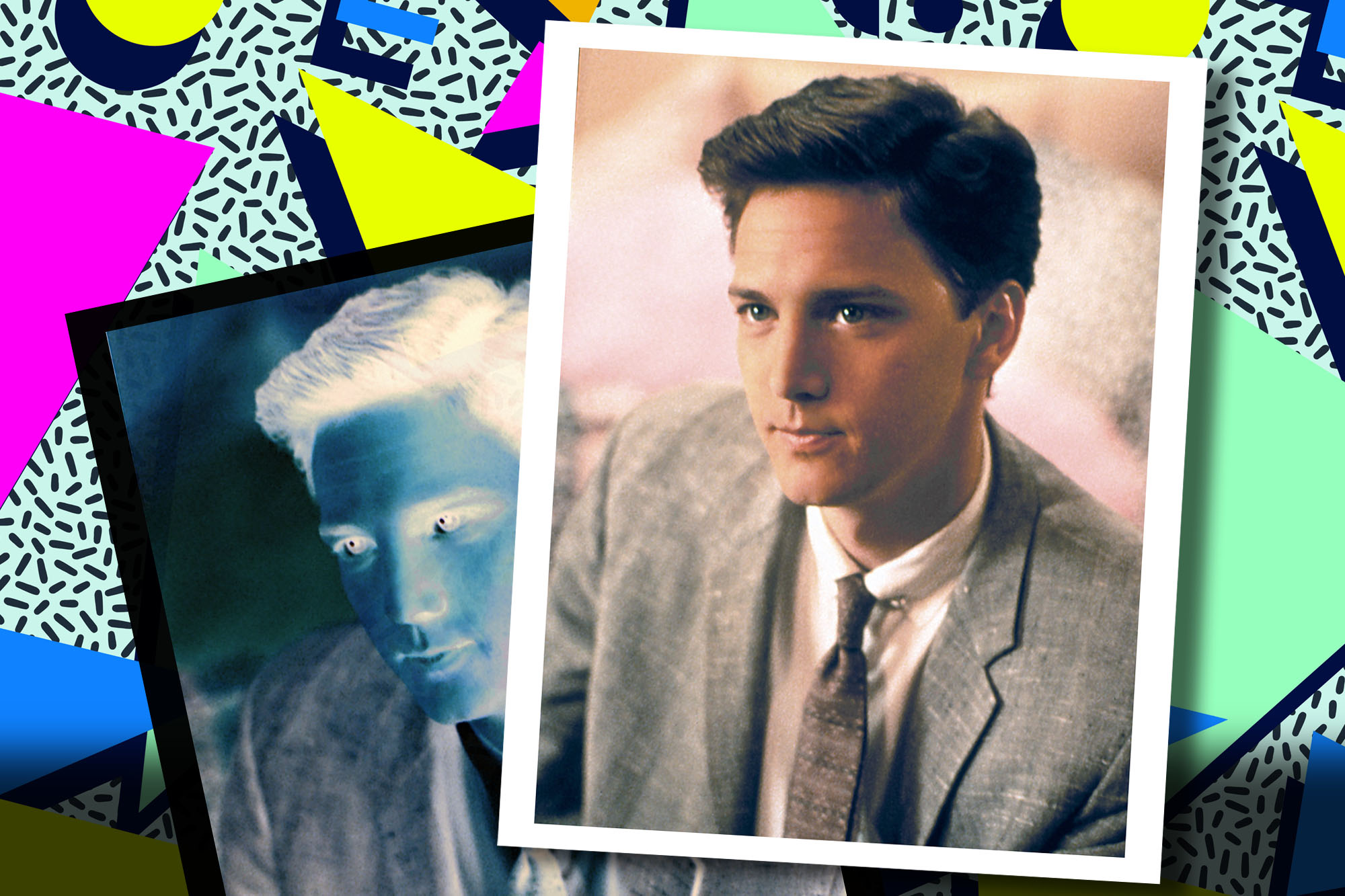 With his bright blue eyes, boyish frame and baby face, actor Andrew McCarthy looked like the kind of guy a girl could bring home to mom. But as he shot to fame as a member of the ’80s Brat Pack, he secretly led a life of debauchery, sleeping with strippers and nursing a coke habit that nearly gave him a heart attack.

And while he had a crush on many famous actresses at the time, few would give him the time of day, he reveals in his new memoir, “Brat: An 80s Story” (Grand Central Publishing), out May 11.

His role in the 1986 film “Pretty in Pink” marked McCarthy’s entrance into a glamorous Hollywood life. Stays at the Chateau Marmont and parties at Sammy Davis Jr.’s house soon followed. At one hotel party, the actor spotted a “cute young woman with a pixie haircut.”

McCarthy chatted her up, but “Courteney Cox was having none of me,” he writes.

Instead, the actor was growing closer to a stripper he’d met after co-star James Spader took him to an LA jiggle joint.

McCarthy (center) reveals his long struggle with alcohol and drug addiction in his memoir, “Brat: An ’80s Story.” Paramount

There, McCarthy hooked up with a girl named Glitter. After spending the night with her, he showed up for work on the “Pretty in Pink” set the next day.

During a take, the cinematographer suddenly stopped short.

On closer inspection, it appeared the aptly named Glitter had sprinkled her marks all over McCarthy’s clean-cut cheeks.

Raised in Westfield, NJ, McCarthy was one of four brothers, and fell in love with acting while performing a Pingry School production of “Oliver!”

He became determined to study acting and to do it in New York City — “graffiti-scarred, smelly, exhilarating.” Despite middling grades, McCarthy was accepted to NYU, with the stipulation that he maintain a B average.

In his first year at NYU, a friend showed him an ad in Backstage magazine in search of an 18-year-old to play an “extremely intelligent, but insecure” prep school student.

A new-on-the-scene McCarthy once spotted young starlet Courteney Cox at a Hollywood party and tried to hit on her.Getty Images

McCarthy took the subway to the Upper West Side’s Ansonia hotel, where the open audition was being held.

The casting director liked the young actor enough to invite him to ultimately record an audition on videotape — a brand-new technology at the time.

McCarthy writes that he bombed the on-camera audition and was crushed, certain that a life in show business had just slipped through his fingers.

But then, a few weeks later, the film’s creative team assembled in Los Angeles to view the audition tapes. When McCarthy’s segment appeared, the director wanted to skip it, but no one in the room knew how to fast forward the tape. As the group was forced to sit through McCarthy’s audition, one of the producers noted an “Anthony Perkins quality” and suggested he audition again.

McCarthy ultimately won the part in the 1983 movie “Class,” which launched his career.

One of McCarthy’s first acting gigs was opposite Elisabeth Shue in a Burger King commercial. He asked her out for a drink, and she obliged — then never spoke to him ever again.Getty Images

That should have been his big break. Soon after, he let his grades slip and was kicked out of NYU in his second year. He went without work for more than a year, living in his walk-up apartment in the West Village, until he eventually landed a Burger King commercial opposite an “adorable” unknown actress — Elisabeth Shue, who would soon star in 1984’s “The Karate Kid.”

McCarthy was instantly smitten with Shue, and after the commercial shoot, he invited her out for a drink at his favorite Village haunt, Corner Bistro.

“Elisabeth, a bright light of youthful optimism, endured my jaded pronouncements — and the drunks surrounding us — as long as she could,” he writes.

Not long after, McCarthy got the phone call that would change his life — from director Joel Schumacher, who wanted to cast him in a coming-of-age drama called “St. Elmo’s Fire.” The cast included a who’s who of young Hollywood — Rob Lowe, Demi Moore, Judd Nelson and Emilio Estevez.

Though “St. Elmo’s Fire” received a middling reception in 1985, it solidified McCarthy’s place as a member of the Brat Pack. Though the name gave the actors a certain stature, it was originally coined in a vicious New York magazine article as an insult to a young group of up-and-comers at the time.

Even though McCarthy was quickly lumped in with the Pack, he writes, he was not particularly friendly with its members and his name is only mentioned once in the article when an anonymous actor predicts, “I don’t think he’ll make it.”

But McCarthy, who had smoked weed since high school and drank socially, fully embraced his new Hollywood status. To celebrate the start of filming “St. Elmo’s Fire,” the producers gifted him a bottle of red wine. He eventually took that bottle back to New York with him, and one night, decided to open it.

I tried to look as if I had just woken up instead of as if my heart were about to explode.Andrew McCarthy, on being pulled over while snorting cocaine

“It marked the first time I would drink alone,” he writes, beginning a descent into substance abuse that would last years.

But his career kept ticking. In 1986, McCarthy auditioned opposite Molly Ringwald as her love interest in the John Hughes teen drama “Pretty in Pink.”

The part initially called for a jock type, and no one in the room “showed much interest,” McCarthy writes.

But after he left the room, Ringwald turned to Hughes and exclaimed, “That’s the kind of guy I would fall for.”

McCarthy won the role but, he writes, he never grew close to either Ringwald or Hughes, whom he describes as “a private, wary guy.” He says he didn’t get along with co-star Jon Cryer either, who had “a nervous laugh I found irritating.”

On the set of 1987’s “Less Than Zero,” McCarthy’s coke habit spiraled out of control.20th Century Fox

“Pretty in Pink” was a huge success, and Hughes invited McCarthy to do another film, 1987’s “Some Kind of Wonderful.”

But when McCarthy said he wasn’t into the part and turned it down, Hughes never spoke to him again, he writes.

By the time McCarthy was filming 1987’s “Mannequin,” he was “drinking to excess on a near daily basis” and also became hooked on cocaine.

On 1987’s “Less Than Zero,” he writes that his coke habit nearly gave him a heart attack. Before one scene in which he dove into a pool, he took a hit, and when he splashed into the cold water, his chest “constricted in a way I hope to never feel again.”

Soon after, he took a drug-fueled cross-country road trip with two friends, punctuated by too many drinks in depressing hotel bars and a near bar fight in Colorado.

As the group drove through Missouri, a cop appeared and flashed his lights to pull over. The driver hit the brakes, and “the small mound of cocaine” McCarthy had spread out in the back seat flew everywhere.

McCarthy checked into rehab in 1992, and has since turned to directing and TV acting and is now a father of three.WireImage

The actor tried to sniff up as much as he could as the officer approached.

“The cop flashed his light through the car, into the backseat, and across my face,” the author writes. “I tried to look as if I had just woken up instead of as if my heart were about to explode out of my chest.”

Aware that alcohol had gone from an “adolescent amusement” to “the dominant force” in his life, McCarthy decided to go cold turkey just before he started shooting the 1989 comedy “Weekend at Bernie’s.” To stay sober, he stopped going out.

Then, while shooting 1990s “Jours tranquilles à Clichy,” McCarthy’s co-star offered him a beer. As he raised the can to his lips, his hands began trembling, knowing he was “putting a match to kerosene.”

The next three years were “lost and painful” until one morning McCarthy awoke in his apartment “violently hungover, wracked by convulsions.” He stumbled into the bathroom and dropped to his knees, crying for what his “life had become.”

In 1992, at 29, McCarthy finally checked into rehab and “began a life without alcohol or drugs that has continued, day in and day out,” he writes.

At the same time, his Hollywood heartthrob status began to wane, and he turned to directing and acting in TV shows like “Good Girls.” A father of three, he still lives in the West Village and is married to his second wife.

And finally, some 25 years after the “Brat Pack” label was minted, he’s finally made peace with his place in it.

“The power of the group label ultimately enlarged all of our statures,” he writes. “It was a stigma that ultimately transformed into a loving moniker.”